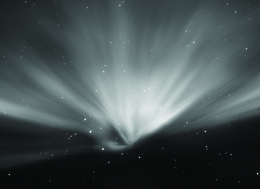 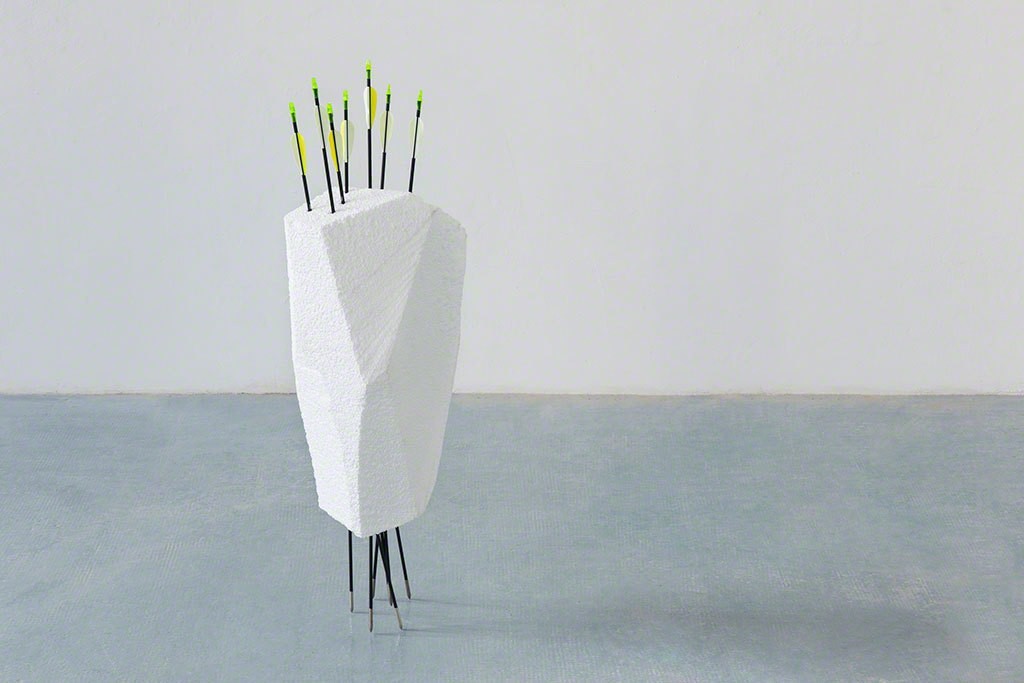 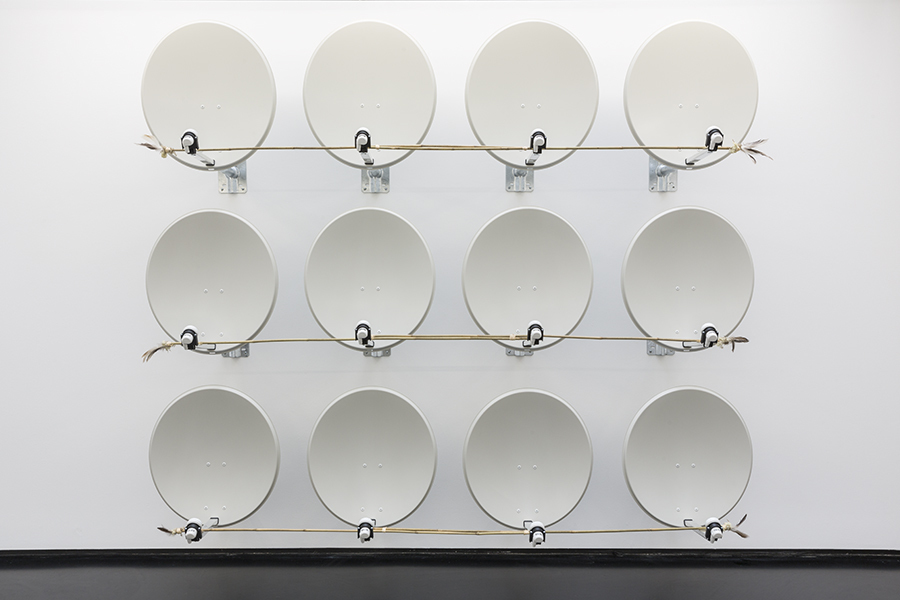 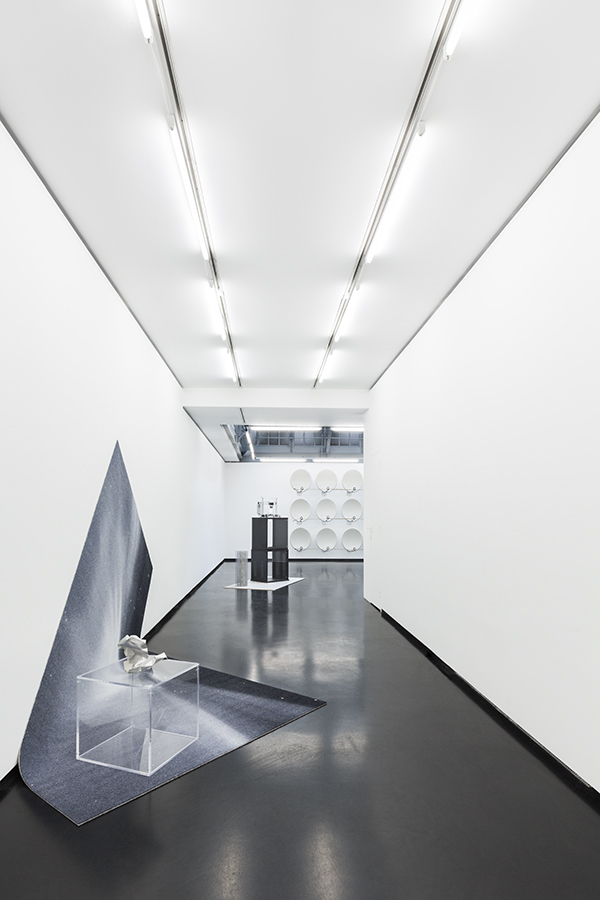 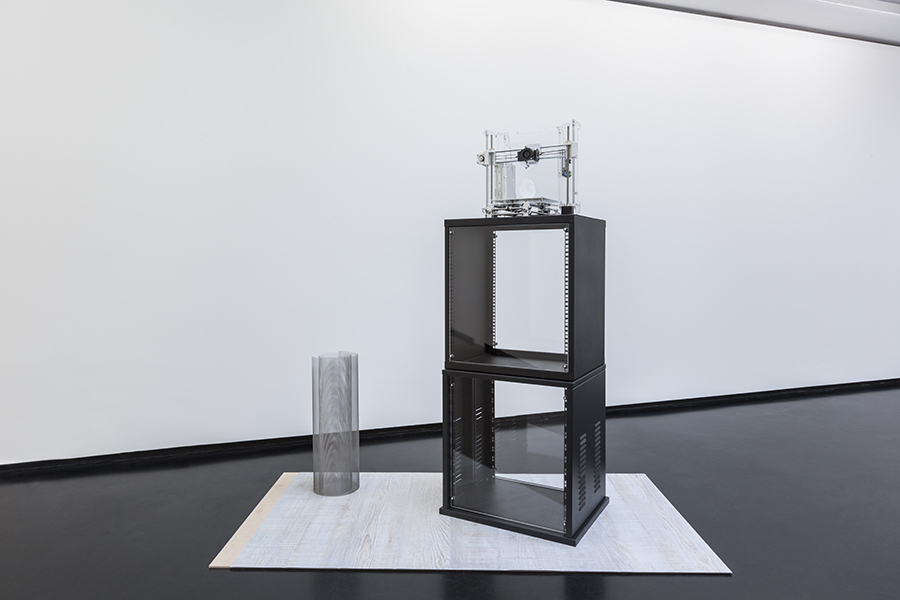 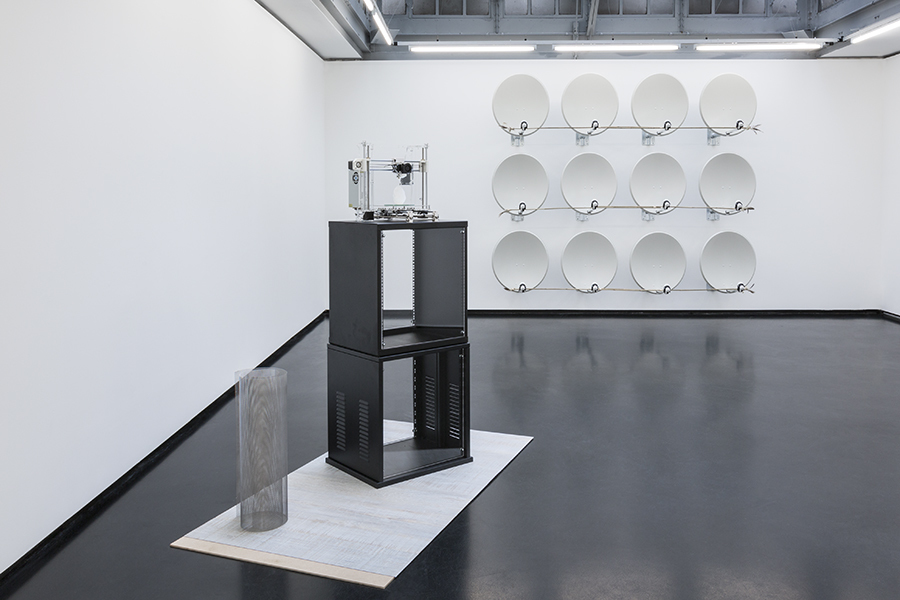 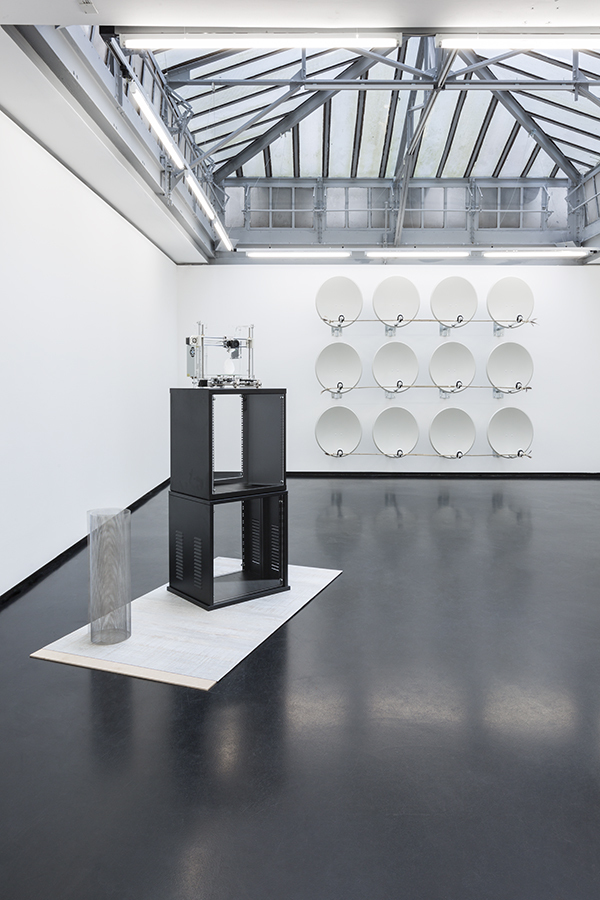 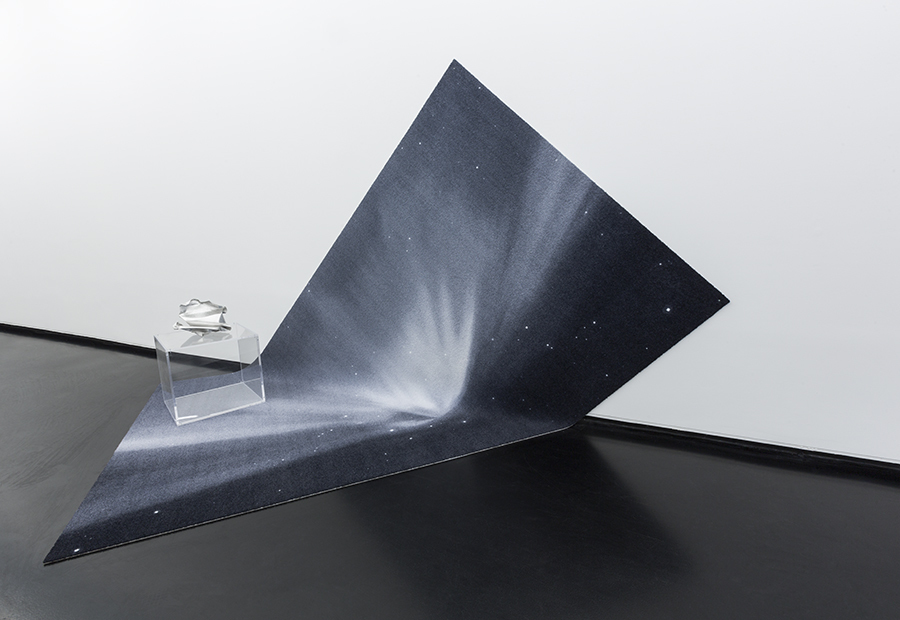 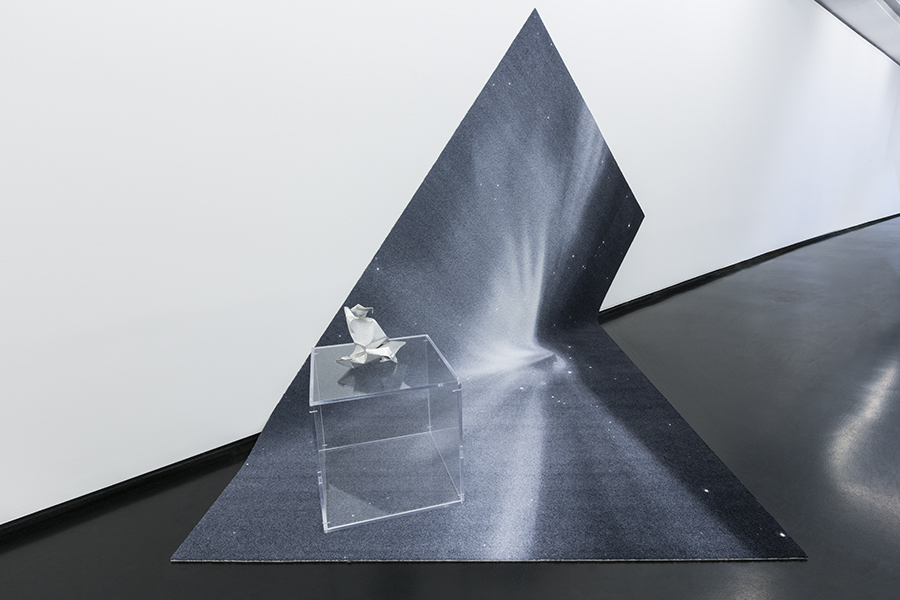 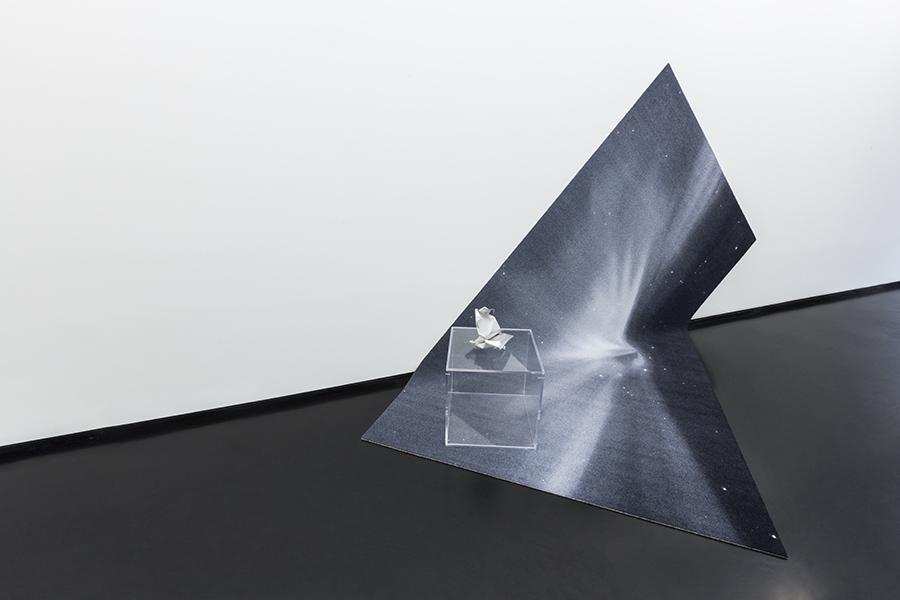 The artistic practice of Pierre Clément is articulated around the cultural, aesthetic, and political forms that have emerged with the Internet. For his first solo exhibition at XPO GALLERY, Pierre Clément proposes an ecstatic voyage among new fields of consciousness, putting to the test visions of the world that are more “suppressed” and more “underground” such as shamanism, esotericism and the counter-culture.

Calling forth a mysticism that is tinted with empirical knowledge, the title of the exhibition telescopes the stakes inherent in the fields of communication and technology with that of the human and occult sciences.

At the same time coding, receiver and transmitter, Transcom Primitive draws its origins from the chaos and the advent of new technologies. A clever mix of raw materials and consumer objects, each work is a composition that reveals the sculptural potential of imagery. “Psychedelic,” “hacked,” and “pimped” all at the same time, this assemblage of objects, materials and narratives recalls the Codex Seraphinianus, the book of the “information age,” an epoch in which the coding and decoding of messages becomes more and more essential in genetics and information technology. Finding order in that which seems chaotic or lacking sense, these works transform the very idea of the visible by reinventing an equilibrium in the world. It is a question of landscape, memory, and propagation: is it a matter of creating a new world?

This constant appropriation of objects, purchased for the most part online as kits and assembled, shapes this taste for recombination. Between “do-it-yourself-ology” and mythologies inherent to progress and to techno-industrial systems, Pierre Clément explores here the formal potential and the symbolic power of industrially produced images and objects: the 3D printer, the accumulation and repetition of satellite antennas, which is symbolic of a certain form of telecommunication: the reappropriation of screen-savers which are iconic images of the technological universe and of the making of its origins.

Through a subtle telescoping with the origins of techno music, he also affirms the roots of his practice in “sampling.” Seeking natural, supernatural, divine and human “forces,” he “loads” his works with a magical capacity and creates illusions by falsifying materials, by reappropriating techniques that are both hand-made and state-of-the-art. This call to underground and clandestine powers derails and redirects the function of these objects. From the practical to the tactical, knowledge recombines with action within these multiple dichotomies between technology and the archaic. Each material is used here for its physical and symbolic properties and never ceases to contribute continually to this tension.

Considering these transformation of human consciousness, Pierre Clément explores alternative dimensions of thought and refers to Timothy Leary, a visionary psychologist attached to Harvard University, a thinker and spokesman for the counter-culture of the 1960's and an icon of new-edge cyberpunk which questioned the acceleration of the mind and its powers via technology, drugs, and cultural movements (hippy, beatnik, cyberpunk, etc...).

From Timothy Leary (Chaos and Cyber Culture) to Jeremy Narby (The Cosmic Serpent, DNA and the Origins of Knowledge) or Greil Marcus (Lipstick Traces: A Secret History of the 20th Century) we can also glimpse reference to John Zerzan, an American author and philosopher of Neo-Luddite primitivism1 and the terrorist Ted Kaczynski, nicknamed the Unabomber. John Zerzan called for a return to primitivism, that is to say a radical reconstruction of society based upon the rejection of alienation and upon the ideal of the state of nature. Between ideology and technology, the interior world telescopes with the exterior world.

This exhibition, inscribes itself in the context of research that questions “the use of forces: magical visions, alchemy and the occult in contemporary art and visual culture.” (support in theory and criticism received in 2014 – CNAP). At the intersection of art, sociology, and popular culture, this critical analysis of occult practices and of the reinvention of lifestyles has largely oriented itself toward counter-cultures in Europe and the Unites States (power structures, communities...). Here, the predictive force of art is constantly being put to the test.