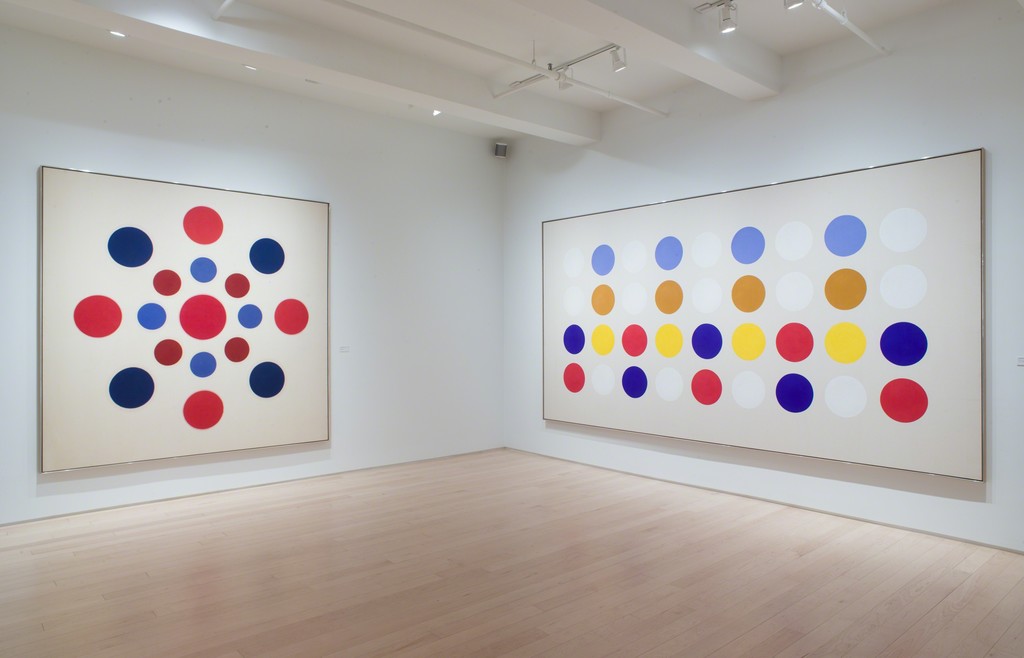 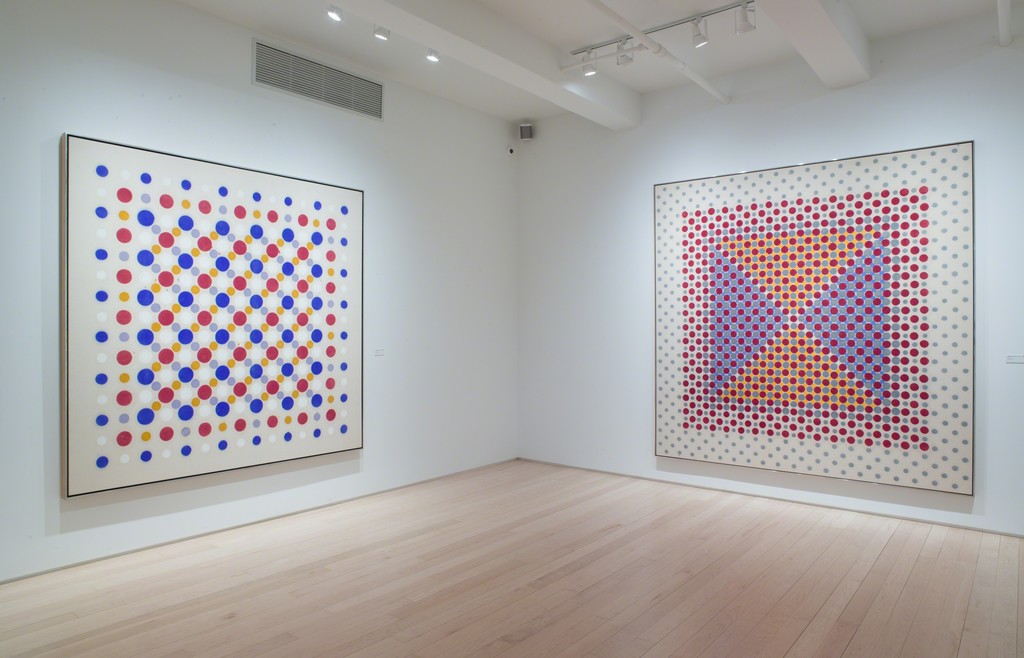 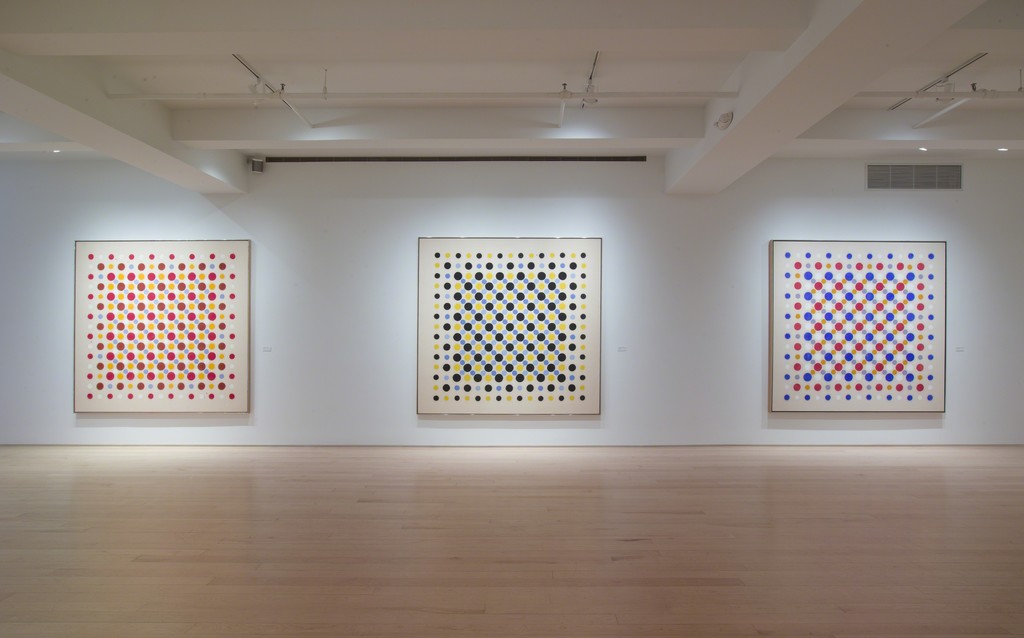 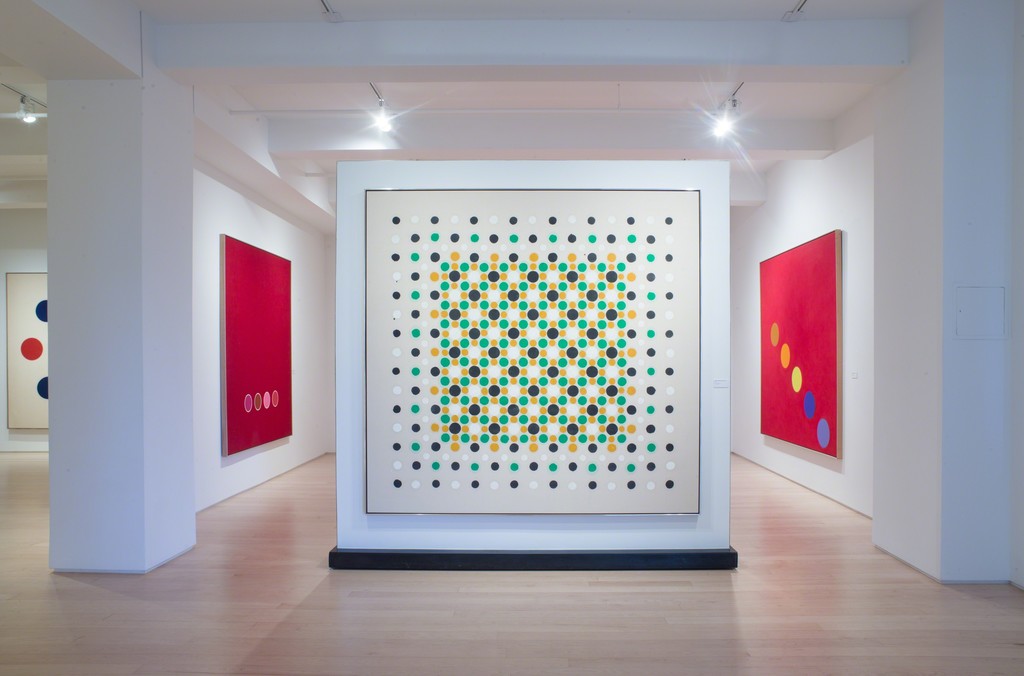 YARES ART is pleased to present Thomas Downing: Spot On, a major exhibition on view in New York, May 12 - August 6, 2018. American artist Thomas Downing (1928-1985) created an extraordinary body of work in the 1960s and '70s, featuring large-scale abstract compositions of pulsating patterns of colorful dots. Born in Suffolk, Virginia, Downing studied at the Pratt Institute in New York. He became a leader of the Washington Color School, or as it is often referenced, the Washington, DC, Color Field Movement. Downing, along with artist colleagues including Morris Louis, Gene Davis, Helen Frankenthaler, Howard Mehring, and Kenneth Noland (his teacher and mentor), experimented with expansive abstractions, often using staining techniques, to create immersive and transcendental realms of color and light.
Downing's unique contribution to twentieth-century art consists of mesmerizing canvases filled with precise arrangements of dots in varying sizes and tonal values. In his series "Dial," "Grid," and "Dot" paintings, Downing produced evocative abstract images that suggest movement as well as an infinite space founded on rigorous, mathematically based geometric systems. Downing's work however is intuitive, intense, and highly expressive, rather than coldly formulaic, as his meticulous process might imply. The handmade nature of Downing's work, the paintings' subtle irregularities revealed in the sprays and faint haloes from soaked paint around his circular shapes and in the grids, solidify the idea that the effects of structure and color were more important to him than precise execution.
This extraordinary exhibition features over eighteen major paintings that are among the best of Downing's career. Thomas Downing: Spot On is accompanied by a fully illustrated catalogue with essays by noted writers Raphael Rubinstein and Mollie R.Berger, and an introduction by David Anfam, that situate Downing's work within the context of the turbulent era of the 1960s, with its progressive experiments in psychology and science, as well as the work's relevance and importance within the contemporary arts scene today.
Thomas Downing's work is held in major museum collections, including the National Gallery of Art, Washington, DC; The Whitney Museum of American Art, New York; the Norton Simon Museum, Pasadena; the Phillips Collection Washington, DC; and the San Francisco Museum of Modern Art.