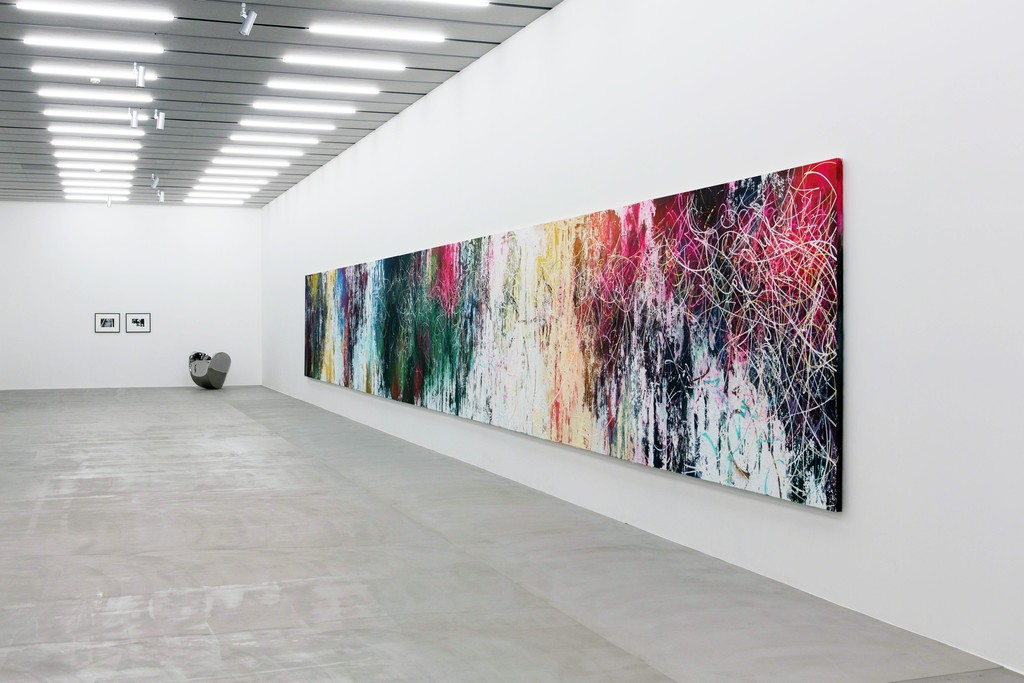 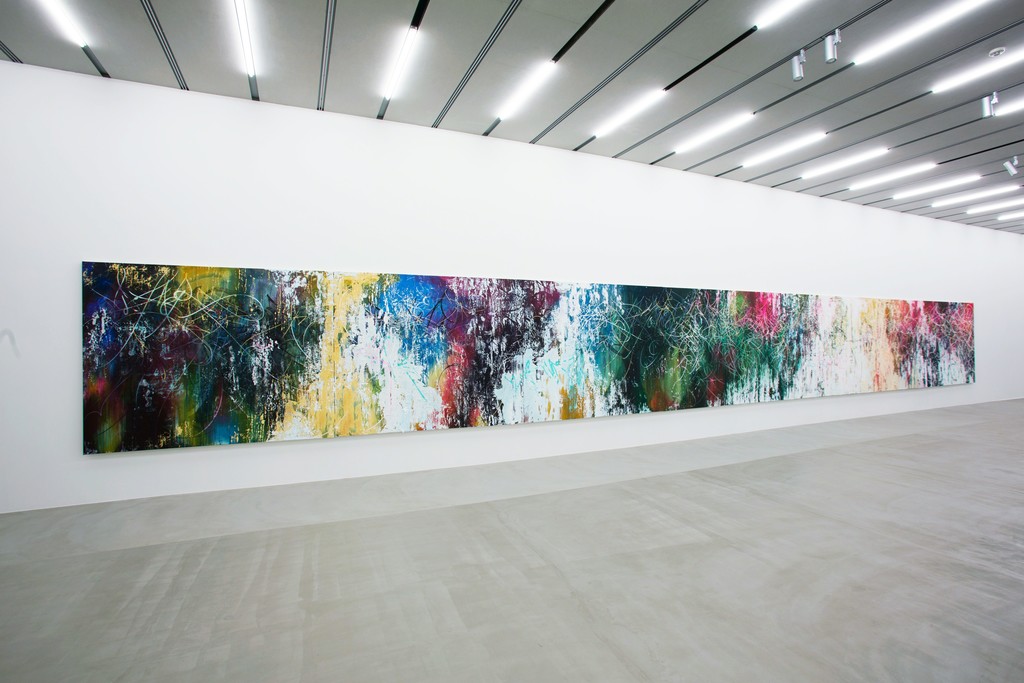 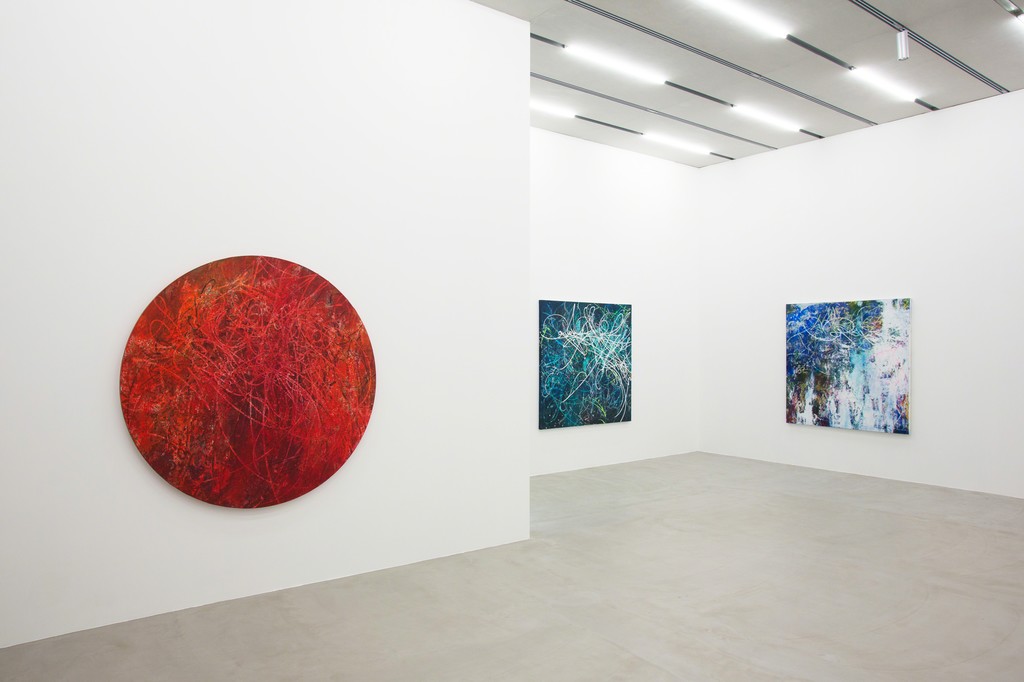 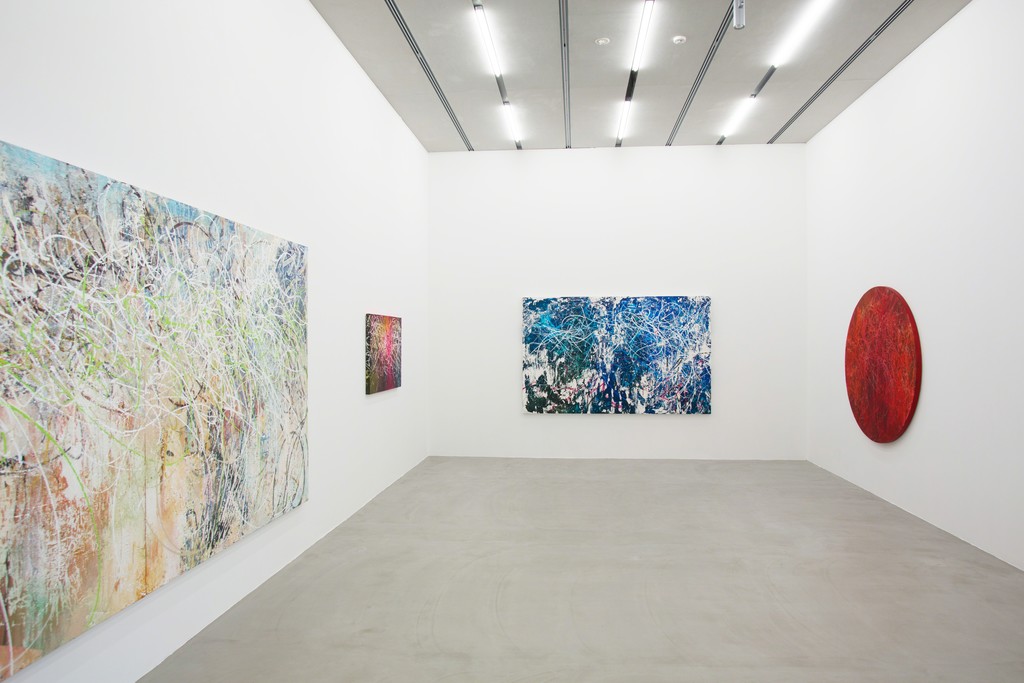 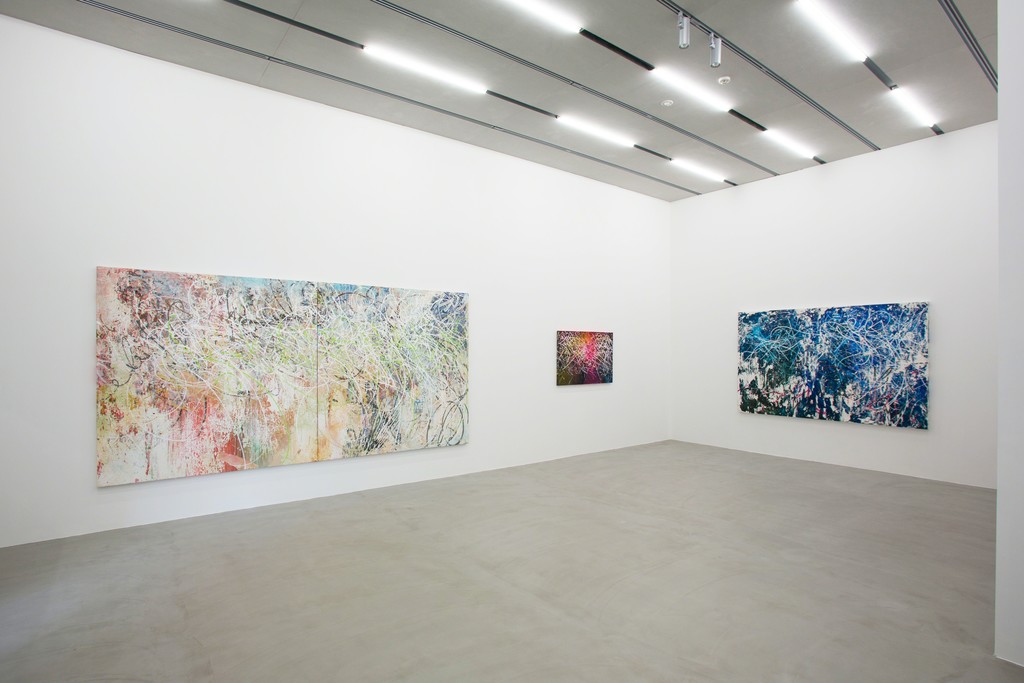 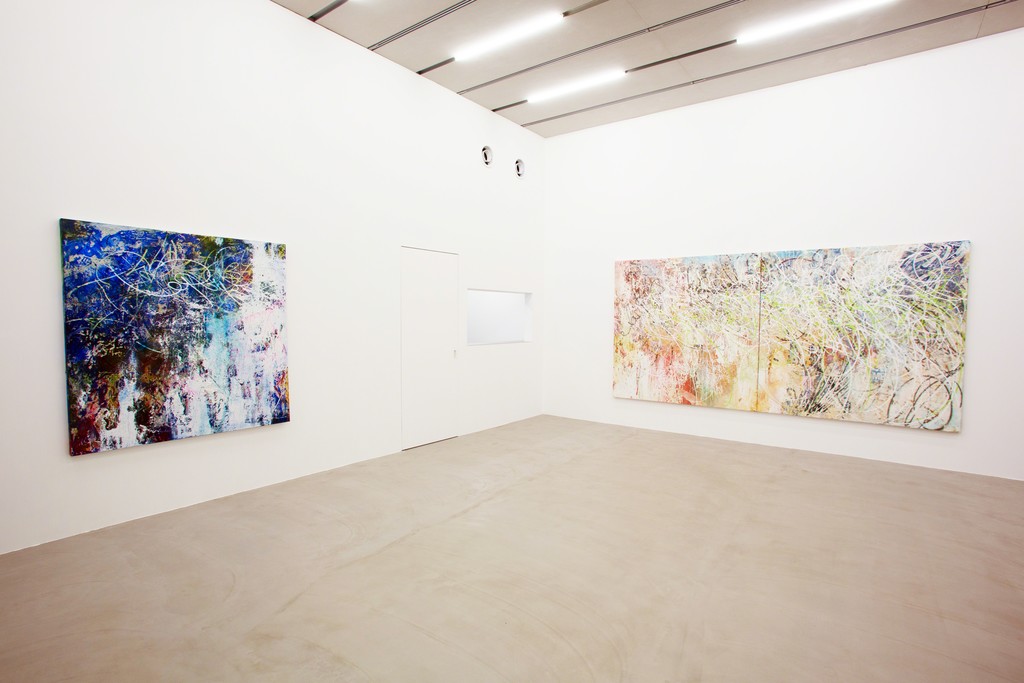 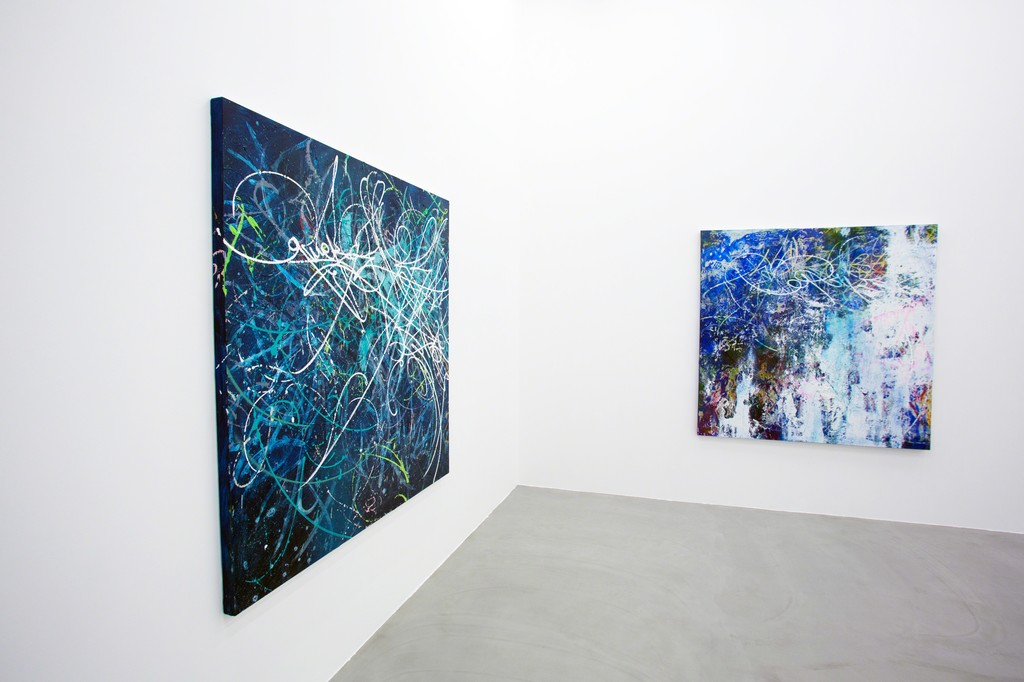 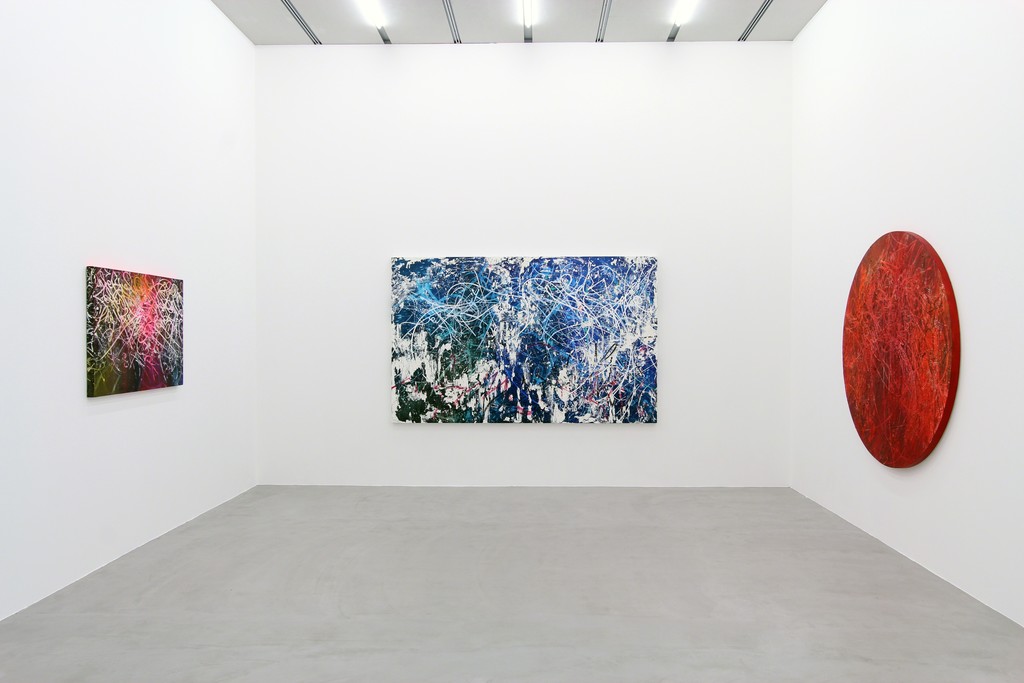 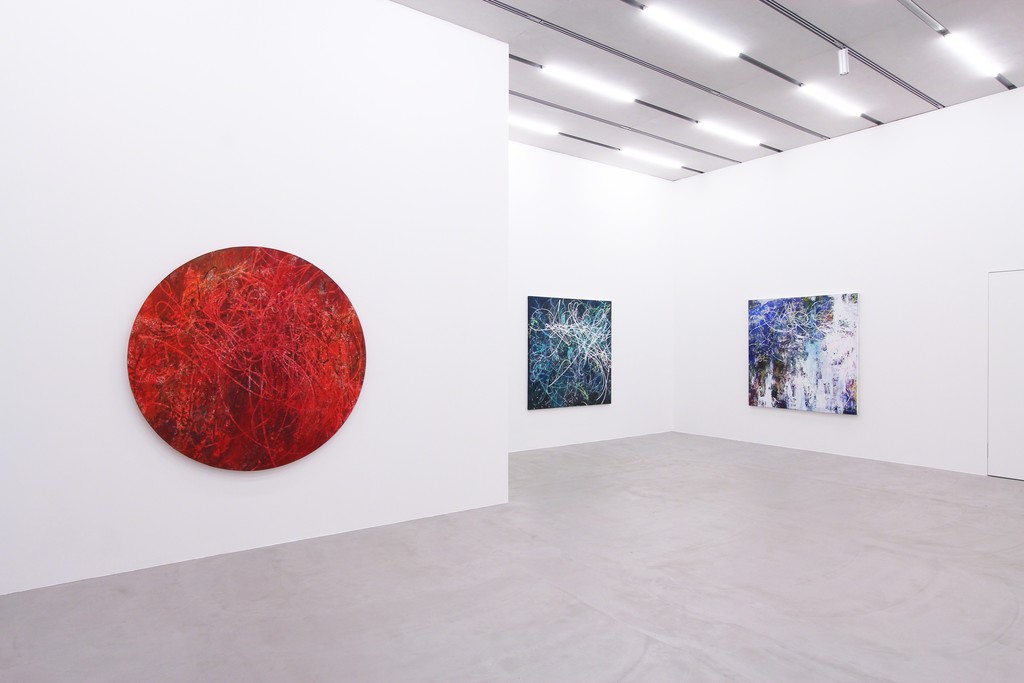 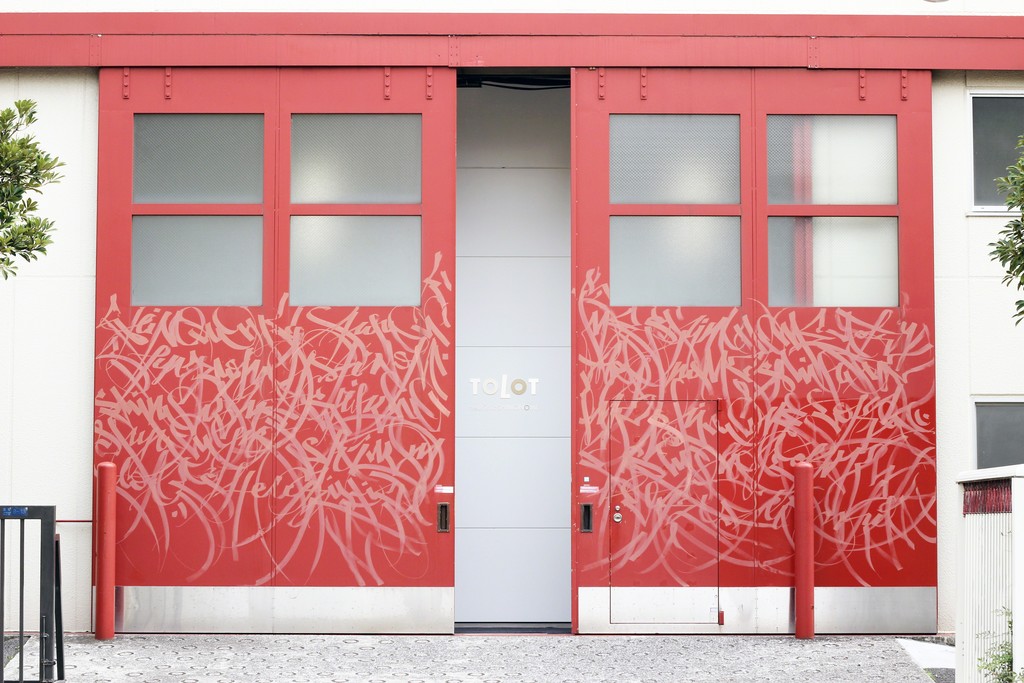 His uniquely expressive painting style, which incorporates elements of both language and writing, has been winning international acclaim. For Parlá, walls are sites where the energy, history, and culture of urban society are located, and where human memory and psychology are inscribed. His work takes its starting point from walking around the international cities where he travels, observing and documenting them in order to start a dialogue with the place.
His paintings are distinguished by their all-over layered backgrounds, made up of paints and collages of found objects like posters, and rhythmically drawn calligraphic writings overlaid onto the different layers. The backgrounds in his works consist of segments of city wall interpreted and rebuilt from his own impressions of them, and the writings resemble journal or diary entries lodged within his memories, or the inspirations he obtains from these walls. Although the abstracted texts constitute an indecipherable language entirely his own, when combined with the layers of painting, they evoke a panoply of stories that unfold within our imagination.
José Parlá summarizes the work in the exhibition PROSE:

⎯ stream of consciousness ⎯ a rhythmic structure that carries the energy and poetic painting body in flux with dance ⎯ defined by memory brought into action in its own moment ⎯ imbedded in an improvisational blend of performance ⎯ founded on research and observation that forms the visual compositions before us ⎯ evoking a metropolitan narrative ⎯ presenting an objective truth ⎯
In this exhibition, consisting of paintings on canvas and a 15 meters mural painting on canvas that Parlá made during his stay will be shown in two gallery spaces. There will be a reception party for the artist on March 21. Also, a 40 pages catalog will be published in conjunction with this exhibition.
Parlá was born in 1973 in Miami, Florida, studied painting at the Savannah College of Art and Design in Georgia and The New World School of the Arts in Miami, and currently lives and works in Brooklyn, NY. Major exhibitions include "Stages" Galerie Emmanuel Perrotin Paris, Deitch Projects, New York, OHWOW in Miami; Walls, Diaries, and Paintings, Bryce Wolkowitz, New York, 2011, Character Gestures, OHWOW, Los Angeles 2011, and Gesture Performing Dance, Dance Performing Gesture, BAM FISHER ( Brooklyn Academy of Music ), 2012. Latest projects include a collaboration with French artist JR for the 11th Havana Biennial in Cuba entitled "Wrinkles of the City, Havana Cuba”, "Diary of Brooklyn", a mural painting commissioned by the Barclays Center in Downtown Brooklyn, "Nature of Language" a mural commissioned by architecture firm SNOHETTA for the North Carolina State University ( 2013 ), curated by PopRally, Parlá was part of a panel discussion at MoMA, New York ( 2013 ). Also in 2013, Parlá was added to the collection of the British Museum, London UK, and his colaborative film Wrinkles of the City, Havana Cuba with Jr was shown with acclaim at the Institute of Contemporary Arts in London. A solo show that unfolds over the entire 3 story building of Haunch of Venison in London runs till March 28th.