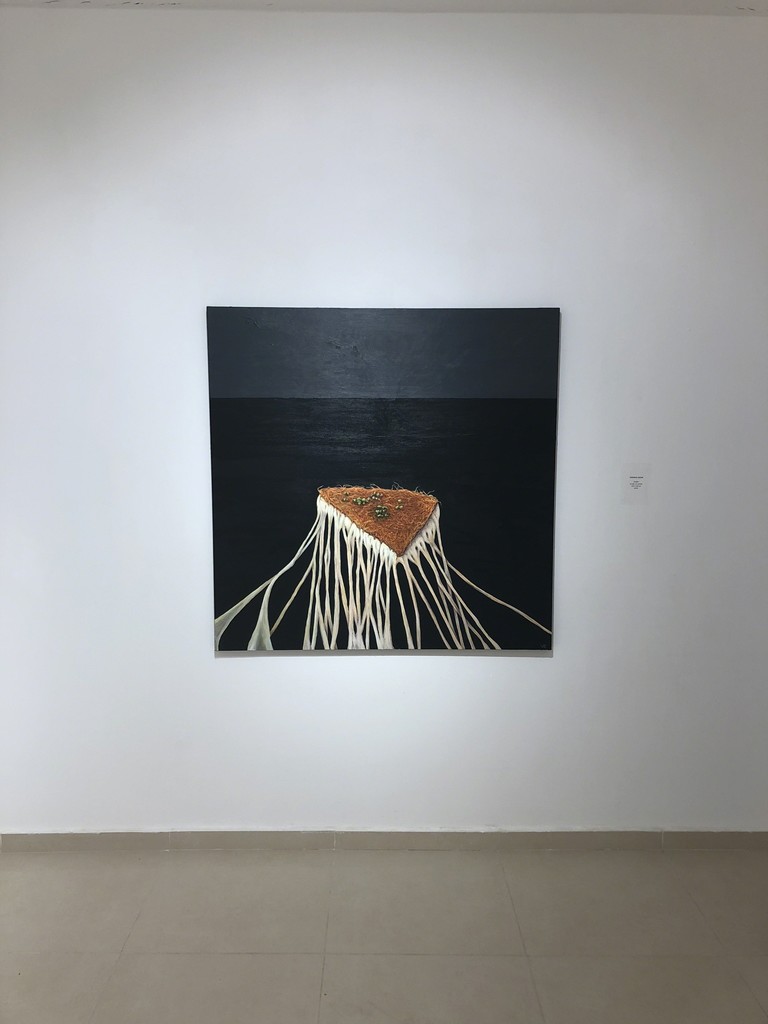 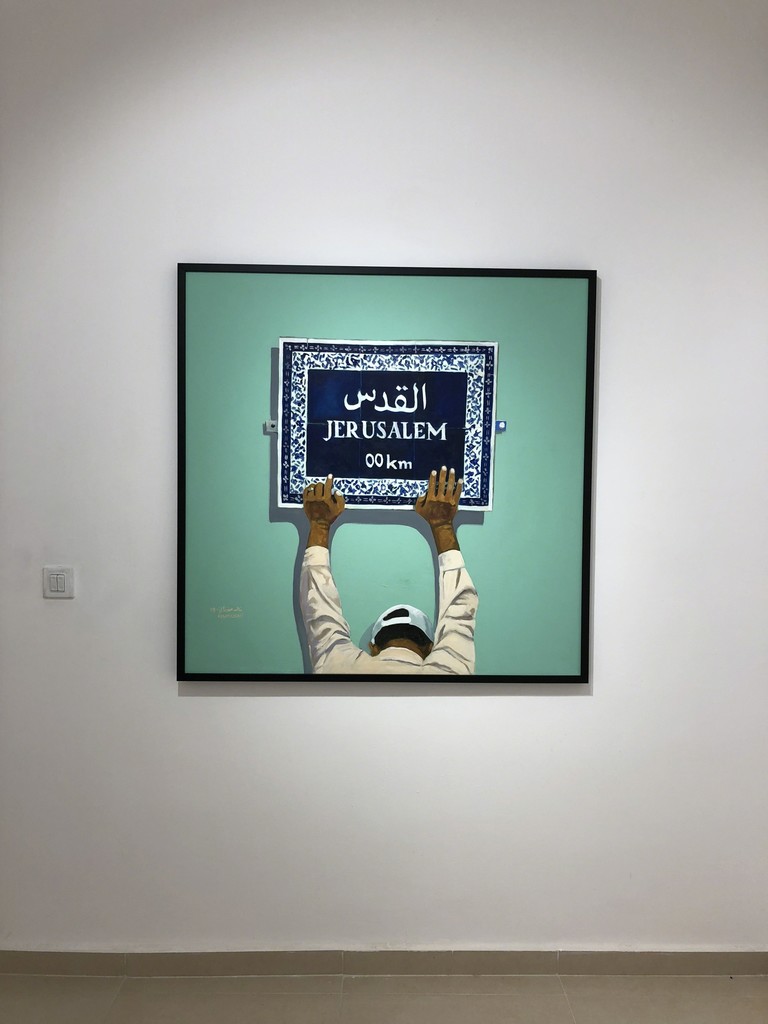 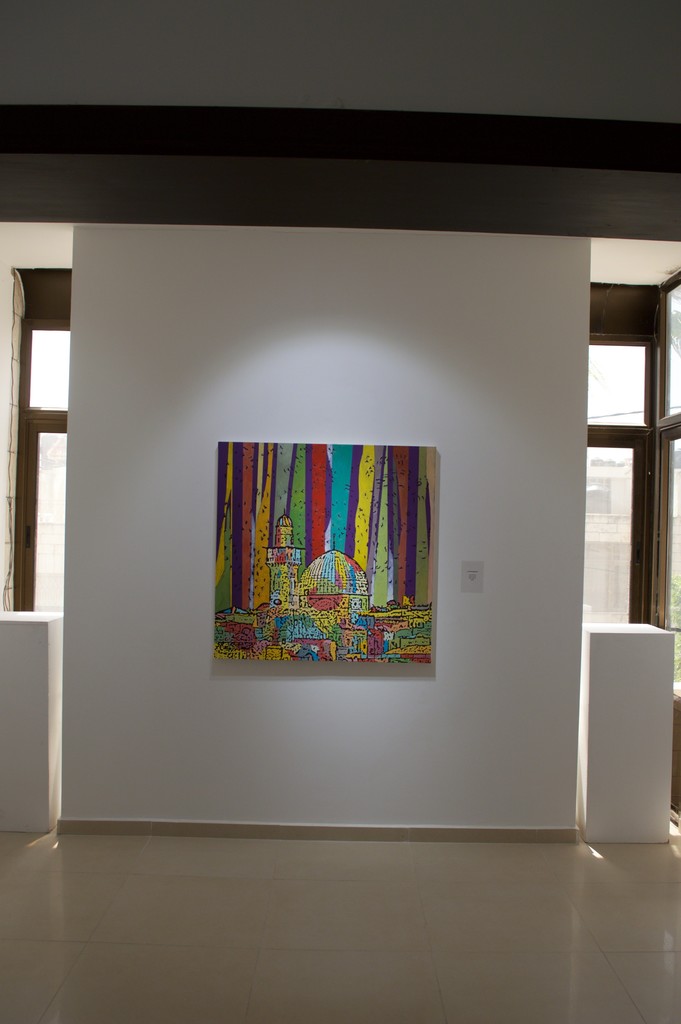 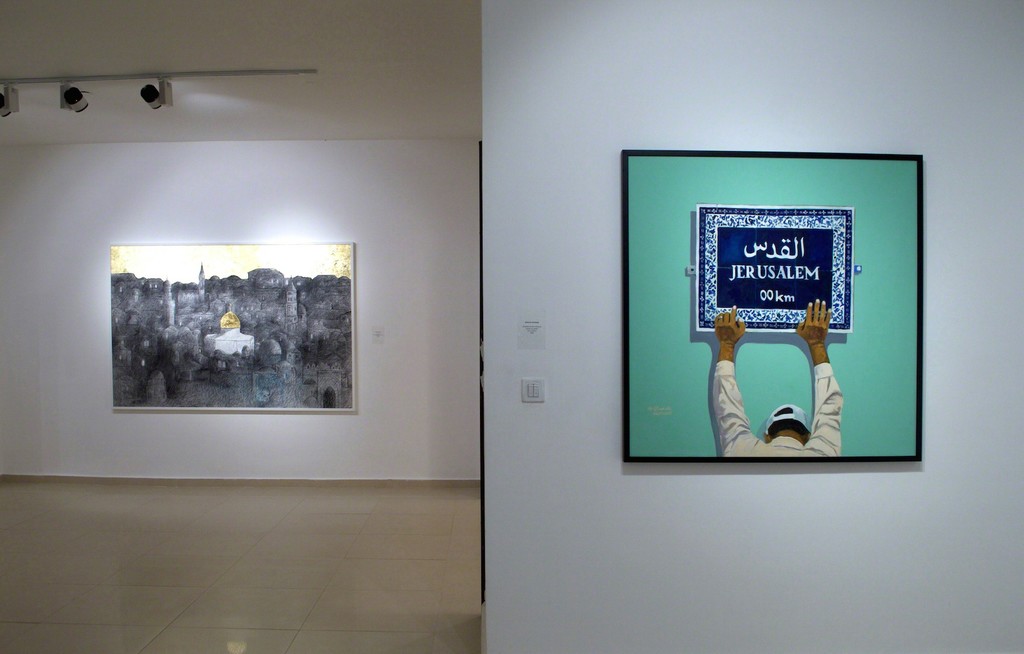 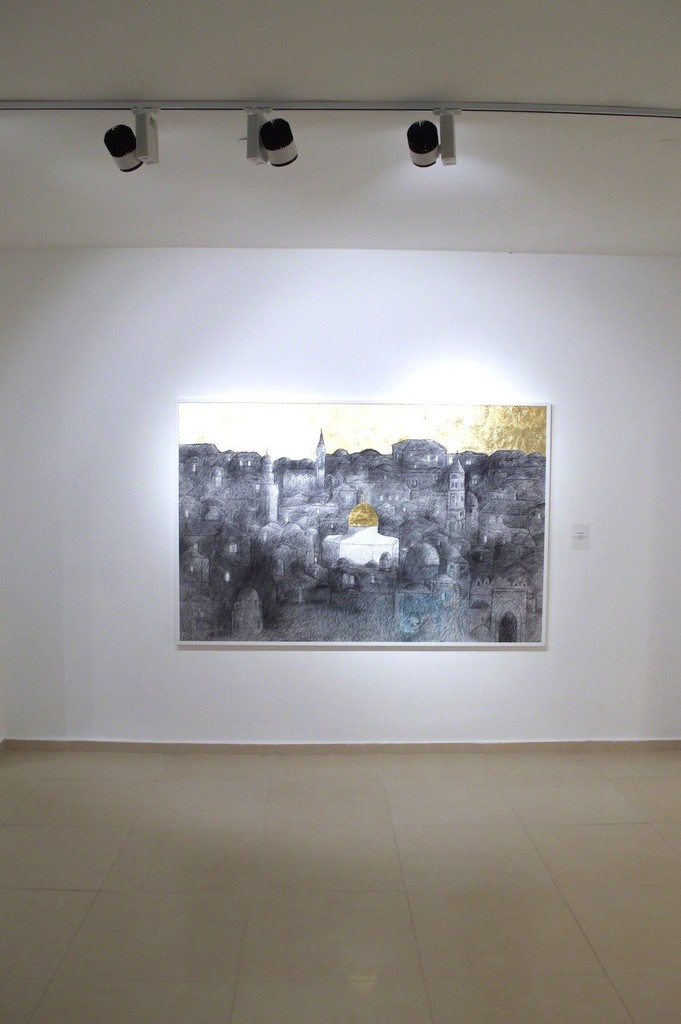 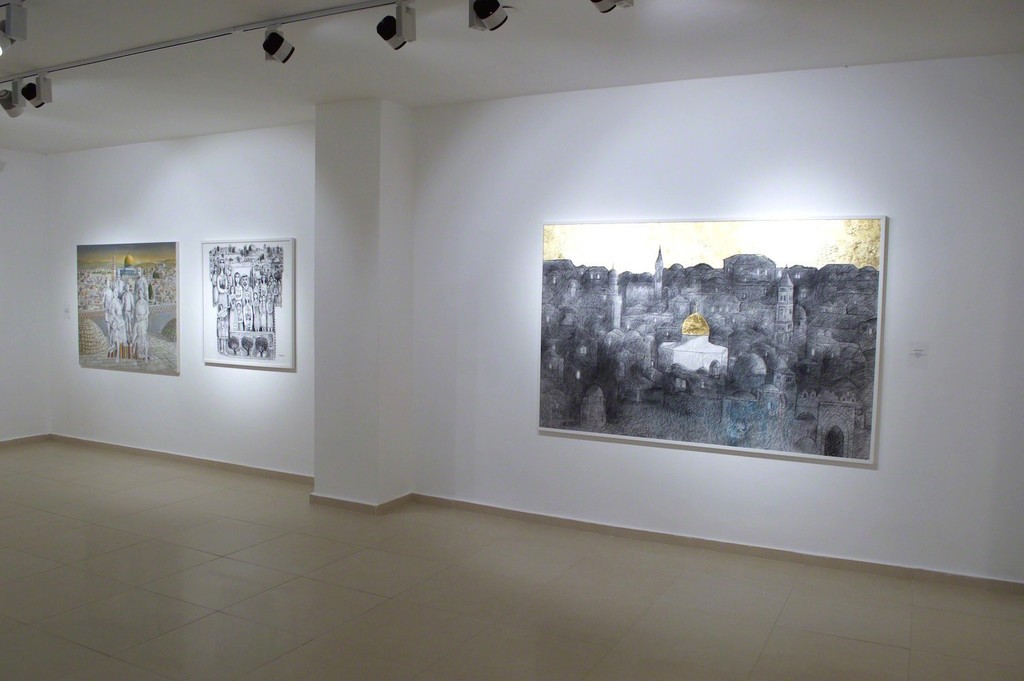 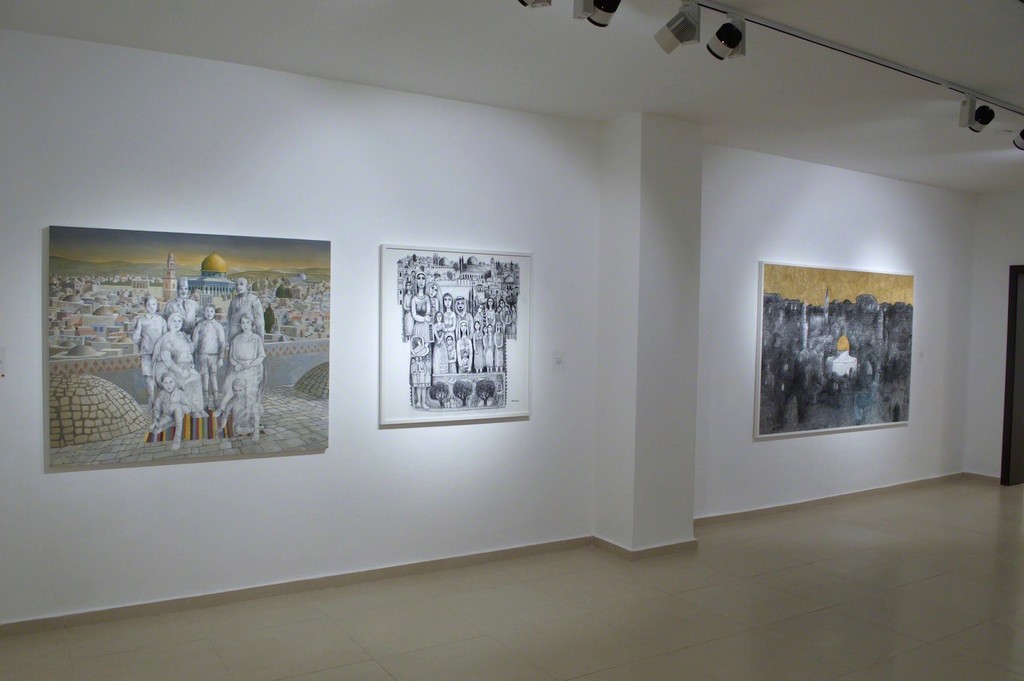 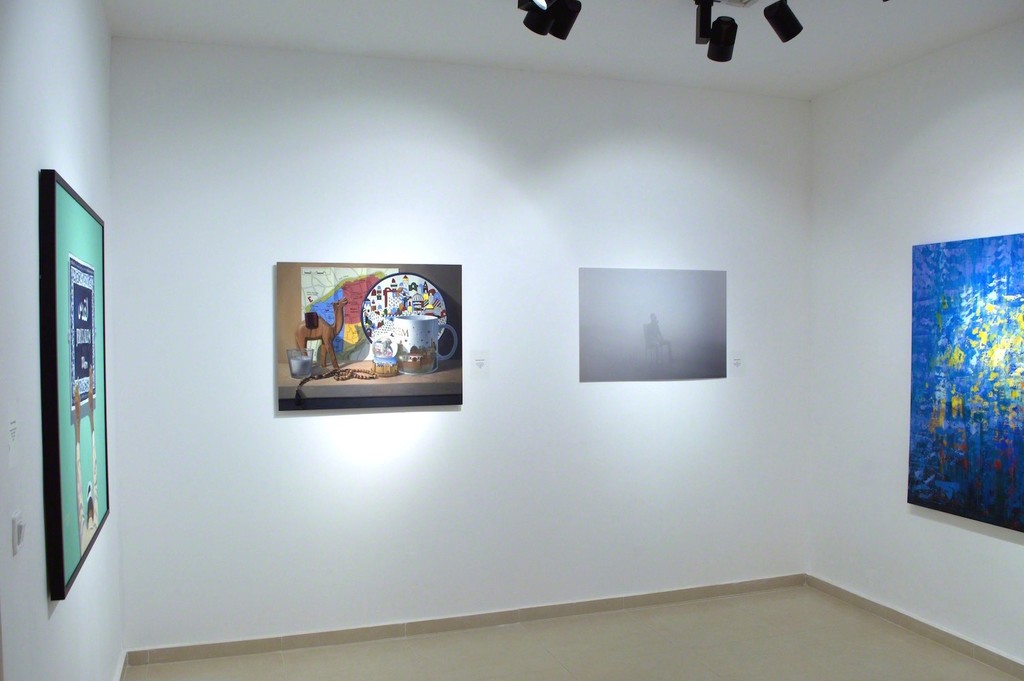 The overwhelming significance of the physicality of Jerusalem as a national symbol permeates many of the artworks. The iconic representation of the Dome of the Rock comes to the fore as some artists celebrate the city via exceptionally colorful works especially those by Fouad Agbaria, Ibrahim Nobani, Osama Said, Dina Mattar, the late Issam Bader and to an extend Ahed Izhiman. Conversely, a strong sense of melancholy and grief overshadows the charcoal works of Nabil Anani, Hosni Radwan and the photorealism painting of Adam Shehadeh were the city loses its colour. Similarly, Sliman Mansour calls in his artwork upon the ghosts of the past to haunt the city’s present time. Khaled Hourani presents a man struggling to hang up a sign of Jerusalem written in Arabic. The Wall in Tayseer Barakat and Mohammad Joulani’s artworks is a prominent feature while Fayez Sirsawi presents a diary of students’ daily life under occupation.

The exhibition also showcases contemporary artists’ perspectives on the socio-political issues surrounding the city’s ongoing occupation. The racial discrimination practices towards Palestinians by the Israeli regime is the subject of Yazan Khalili’s artwork, while Benji Boyadgian’s work is a journey in time in the midst of the complex and fragmented Palestinian landscape of the 21th century “Mega Jerusalem”. Rana Samara’s work focuses on the sights of demolished homes highlighting Israel’s ilegal policy of house demolitions and ethnic cleansing. Rehab Nazzal’s photography work focuses on demonstrations against the Israeli regime’s policies in the city through an ironic scene that reveals from a distance a masked demonstrator taking a rest amid a cloud of intensive smoke. Michael Hallaq on the other hand explores touristic objects that can be found abundantly at souvenir shops around the city, capturing a different layer of “the holy” city that remains popular with tourists even though it is detached from reality. Rawan Khaliliyeh’s artwork is an exploration of the aesthetics of old wooden slabs that are used in building sites, which are scarce in the eastern part of the city due to building restrictions. Vervara Razak attempts at combining traditional symbols presented in the transformation of a Knafeh triangular piece into a traditionally embroidered cushion sold in souvenir shops.

"It is both a celebration of Palestinian creativity and a somber reminder of the ongoing tragedy that continues to blight the indigenous Palestinian population in Jerusalem and across Palestine, " he added.