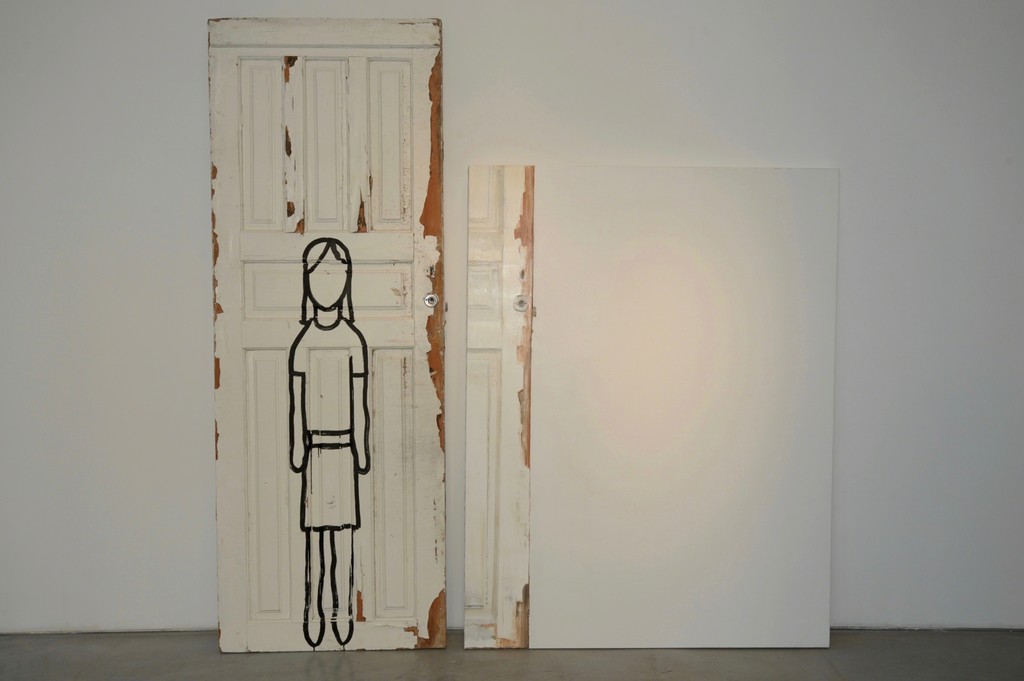 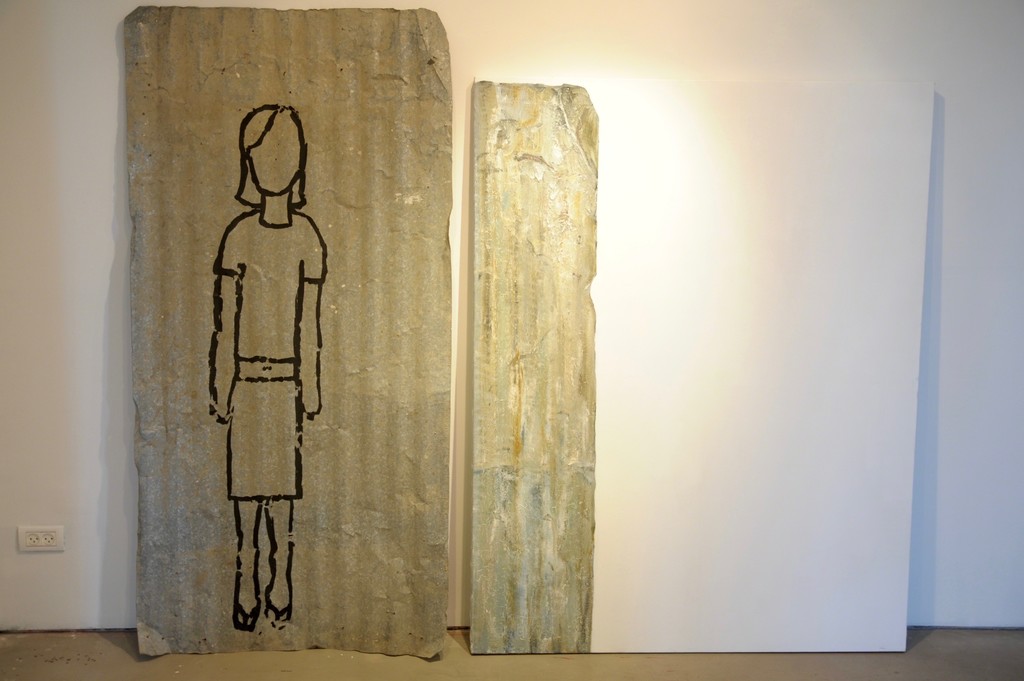 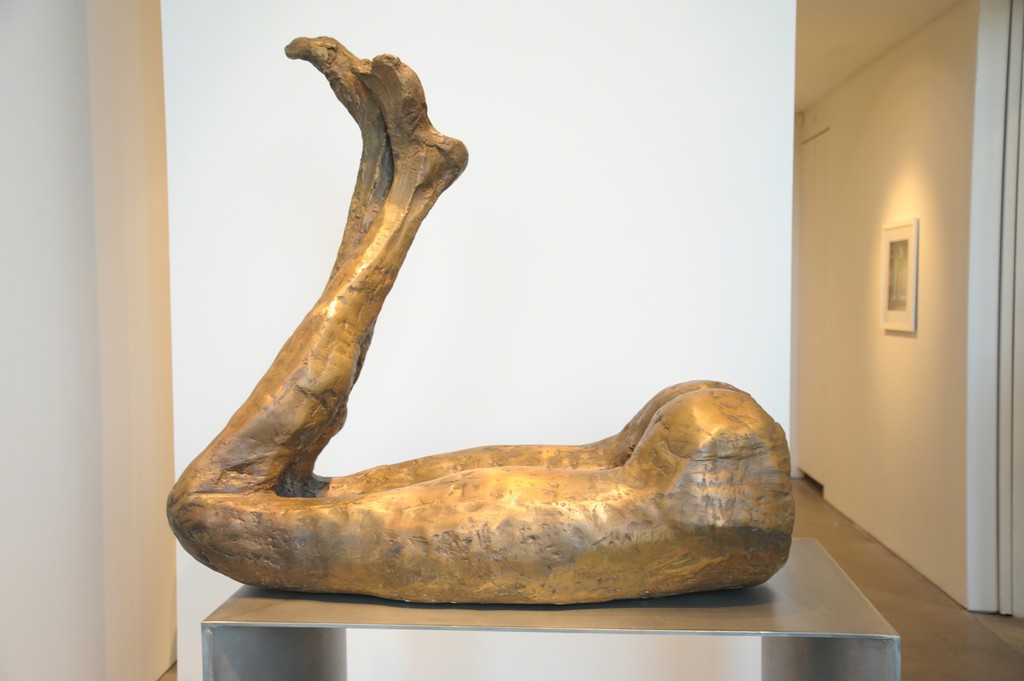 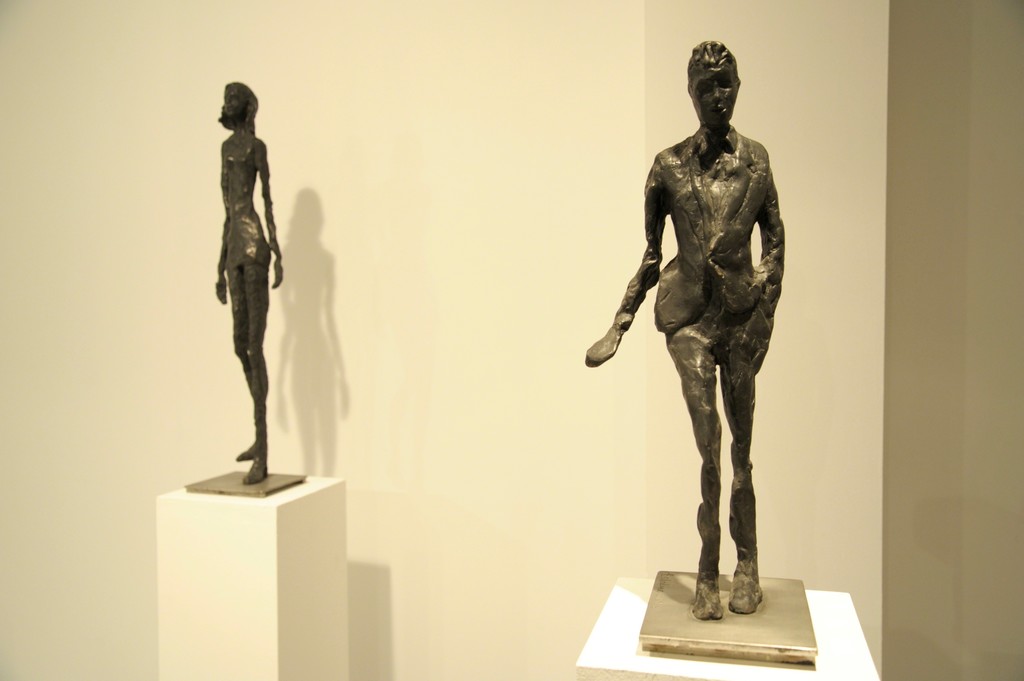 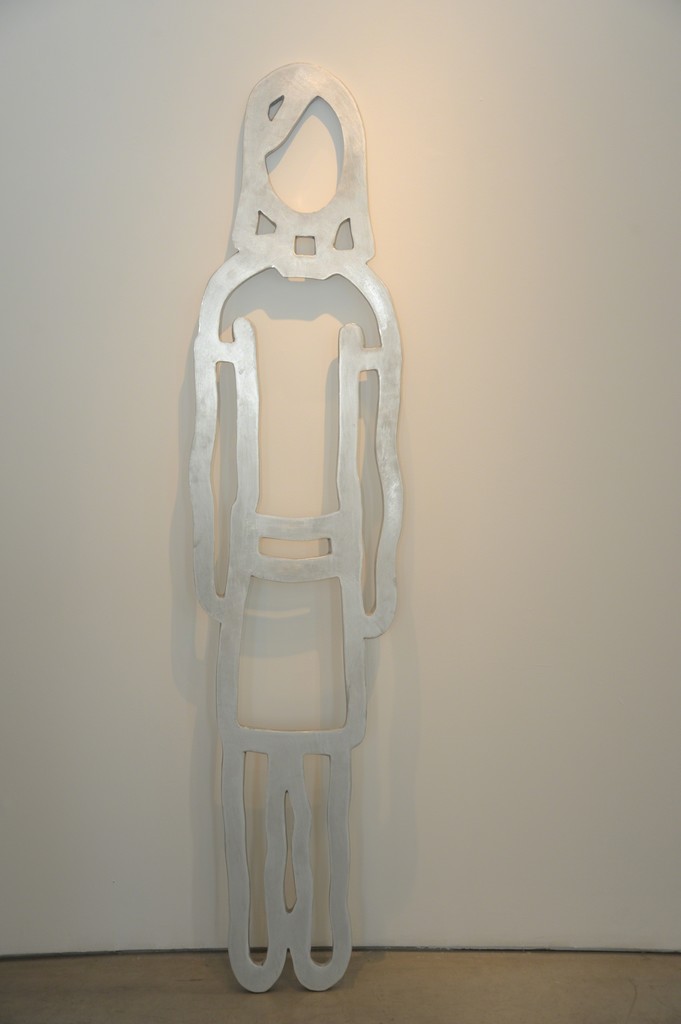 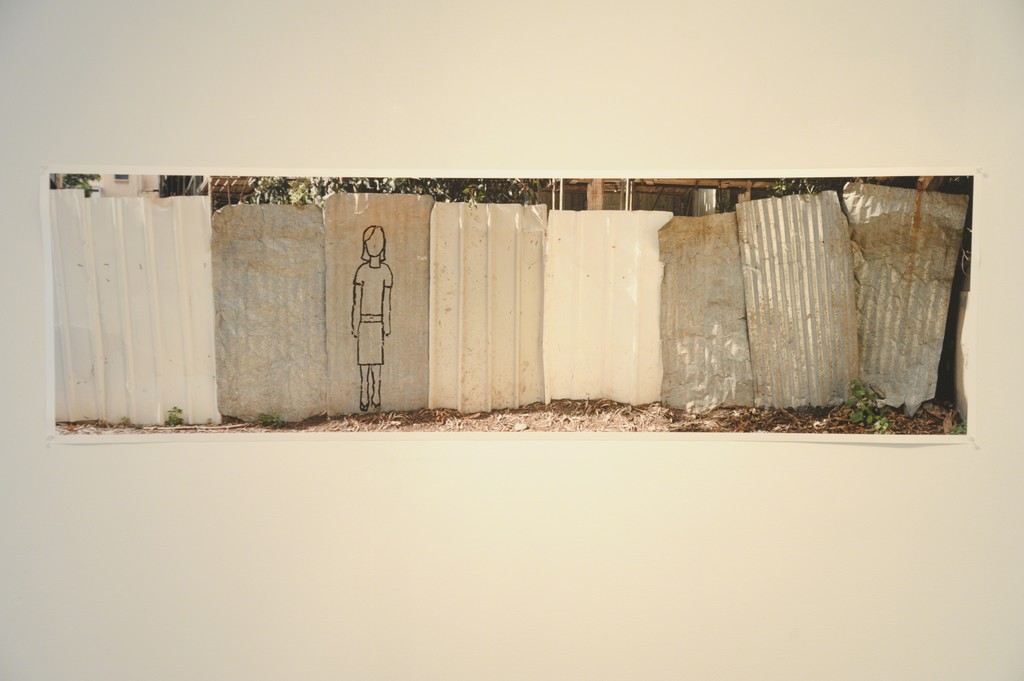 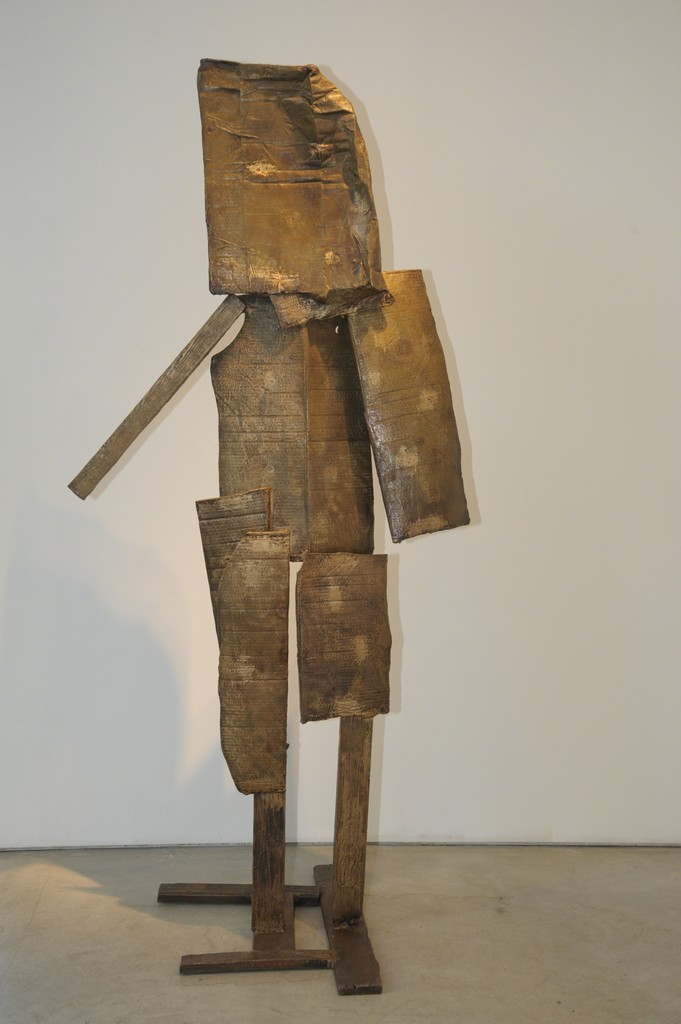 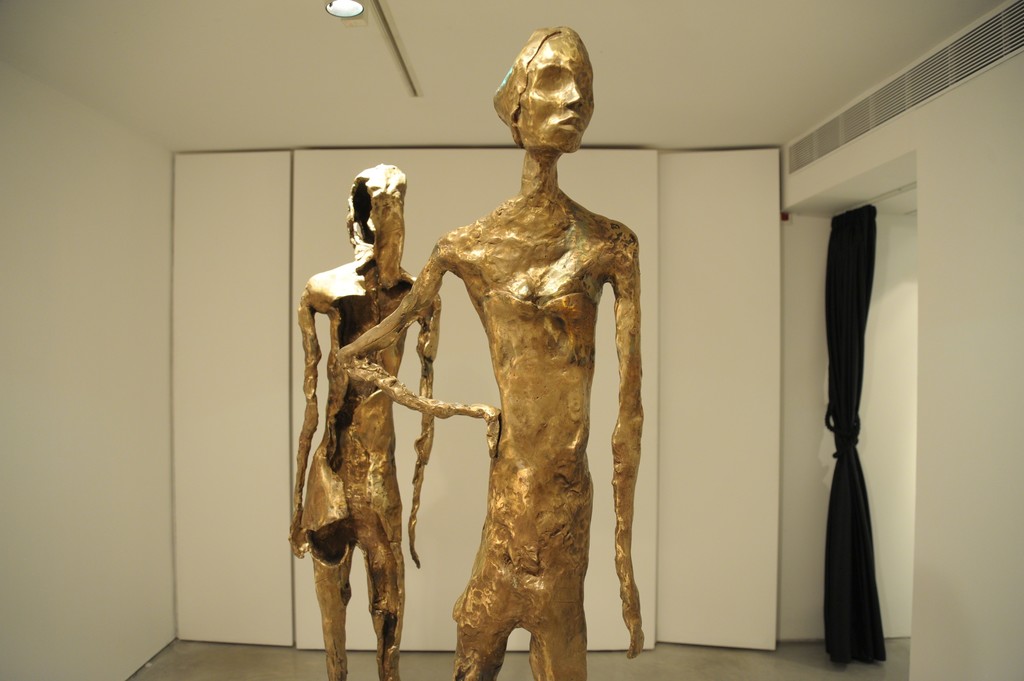 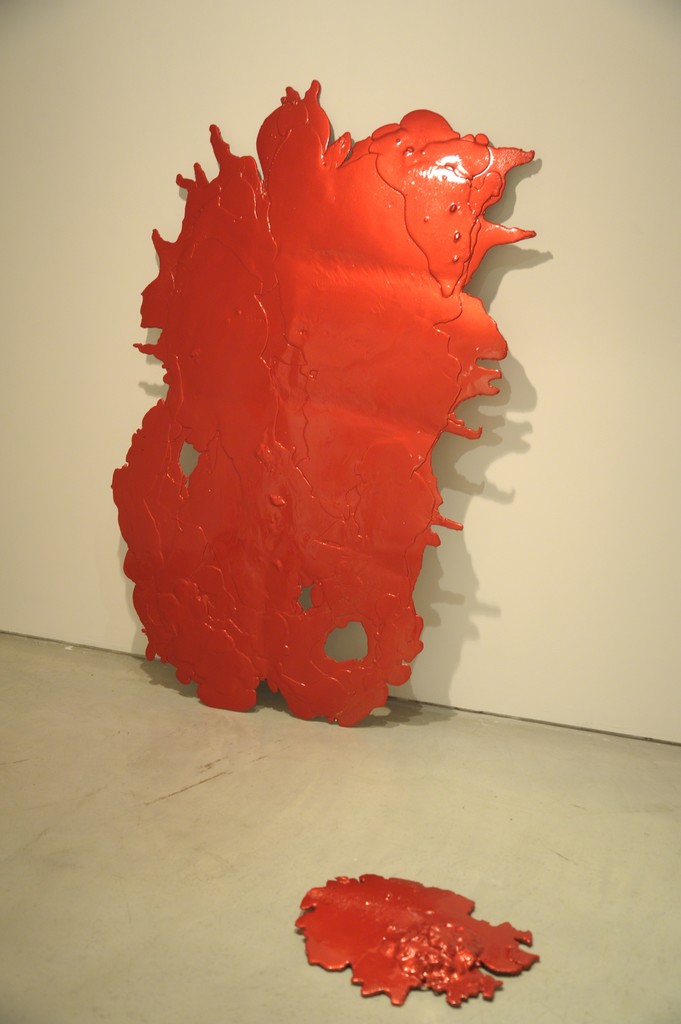 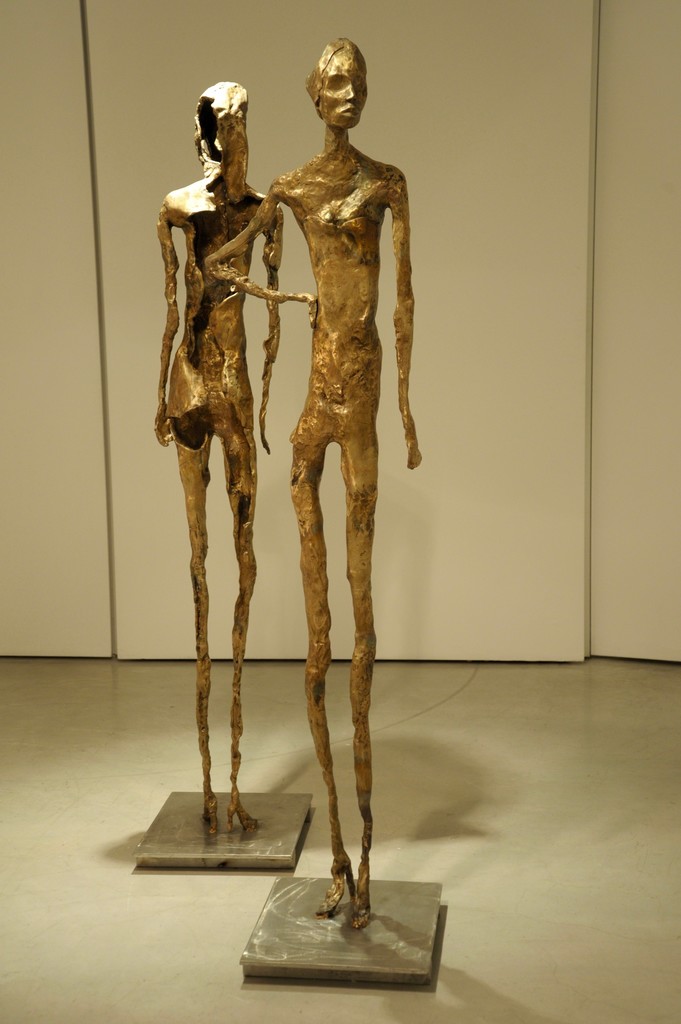 More than a decade ago when the image of Graffiti Girl first appeared in Eran Shakine’s work, she could never have predicted the transformations she would undergo until she could grow to be the descendant of one of contemporary art’s founding fathers; Joseph K.’s granddaughter.
Drawn with a black colored oil stick, the image of this young girl presents to its viewer nothing but formalistic essentials; a figure created solely by a black line that defines the human body’s contour. Faceless and devoid of bodily features, absent of details, garments and identity, this mysterious image proves to be a recurring protagonist in Shakine’s artistic portfolio of the last decade.
Graffiti Girl first appeared as part of a series of drawings created between 2002-2004; a series of drawings on canvases that present linear human figures with no identifying features apart from the black line defining their human form. Faceless and empty, these figures are interpreted by body language and gesture rather than by particularity and details. The emptiness radiating from these images resonates with the formalistic exploration so prevalent in Shakine’s practice, while directing the viewer towards a universal query that is perhaps more sociological than art- historical. The anonymity, the silence, the uniform form, reveal an intense investigation into the human psyche, and more specifically into the modern concept of singularity. Through these figures, Shakine explores the position of the individual within a collective and raises questions about how to maintain individuality while playing the roles assigned to us by Western society.
In the next stage of Graffiti Girl’s development, Shakine removed the image from the studio and started to apply it on various surfaces in public spaces; building walls and doorways, construction sites, fences, wooden plates, and a variety of found urban debris. Working as a graffiti artist of sorts, Shakine began to imprint his signature—in the form of this image—on Tel Aviv’s urban landscape. Now a part of the city’s visual fabric, disappearing as buildings are demolished and reappearing in alternative locations, Graffiti Girl in her current incarnation exceeds formal exploration and highlights social contemplation; here she blossoms into a full bodied social commentary. In taking the image out of the studio and into the street, Shakine plays an artistic move that constructs the girl, physically at least, as an active part of society. That is to say, that in appropriating Street Art practices, Shakine in fact, highlights the issue of individuality, and further enforces it by posing questions about how we, as a collective, render other human beings as visible or invisible.
The move out to the street inevitably led to the image’s current state and latest phase of evolution as Graffiti Girl, 2014 (Joseph K.’s Granddaughter). In this work, Shakine brought the image back indoors, but this time onto the gallery walls and with an intellectual wink. In this variation of Graffiti Girl, the image is painted on a door (found on one of Shakine’s graffiti excursions) and imported into the gallery space. He then photographed the old decrepit door with the girl’s image and printed it to life-size scale, placing the print on the gallery wall right next to the original door. The juxtaposition of an object and its photographic representation creates a direct association, if not an explicit reference, to Joseph Kosuth’s iconic work ‘One and Three Chairs’ (1965); an exemplar of conceptual art which is comprised of a chair; a photograph depicting this same chair installed in the room and printed to life-size; and a dictionary definition of the word ‘chair’. Since the photograph depicts the chair exactly as it is installed in the room, the work changes with each installation.
Similar to Kosuth, Shakine juxtaposes the door and its representation—original and reproduction—confronting ideas about artistic production processes; and similar to Kosuth’s chair, which changes every time it is installed, Shakine’s door too, is ever changing, ever evolving. But while Kosuth’s work demonstrates how a concept can remain constant despite the changes in an artwork’s physical elements, Shakine’s work is precisely about the changing of its own elements. The fact that the door will continue to deteriorate with time makes this an artwork that is in constant flux, a living piece if you wish. More so, that the representation of the door will remain the same—as a frozen moment in time- isolates the reproduction from its original. Thus, herein lies the main difference between Shakine and Kosuth; if Kosuth’s work was an attempt to reduce the gap between concept and its realization, Shakine’s work is an effort to create this gap anew and to amplify it by bestowing on it new meanings.
Shakine’s use of a found object as an original and the removal of the door from its natural surroundings grants the work additional layers of meaning, but furthermore it connects the artistic action to the historical evolution of the Graffiti Girl. The philosophical elements encompassed in this work bring Shakine’s artistic inquiry one level higher and one step deeper in a discussion that is simultaneously art historical, political and social. The power of this piece lies perhaps in that it refers directly to art history but succeeds in avoiding the historical charge. In addressing pressing social issues, Shakine transforms the work from an historical reference to a comment on contemporaneity.
The artistic processes exemplified by the image of Graffiti Girl presents a complex intellectual investigation; in every stage of her life the image goes through an additional formal reduction while it gains additional meaning. From the studio to the street, to a door and back to the gallery space –Graffiti Girl maintains her silence, her critical edge. Behind the black, seemingly simple line lies a multiplicity of layers, references, allusions and visual clues that are just waiting to be deciphered.