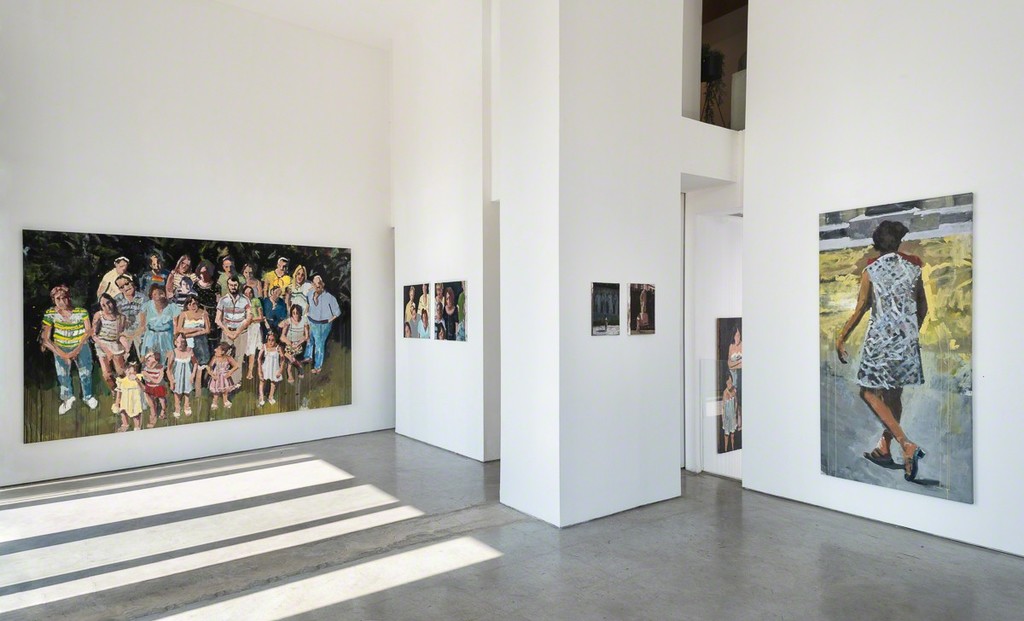 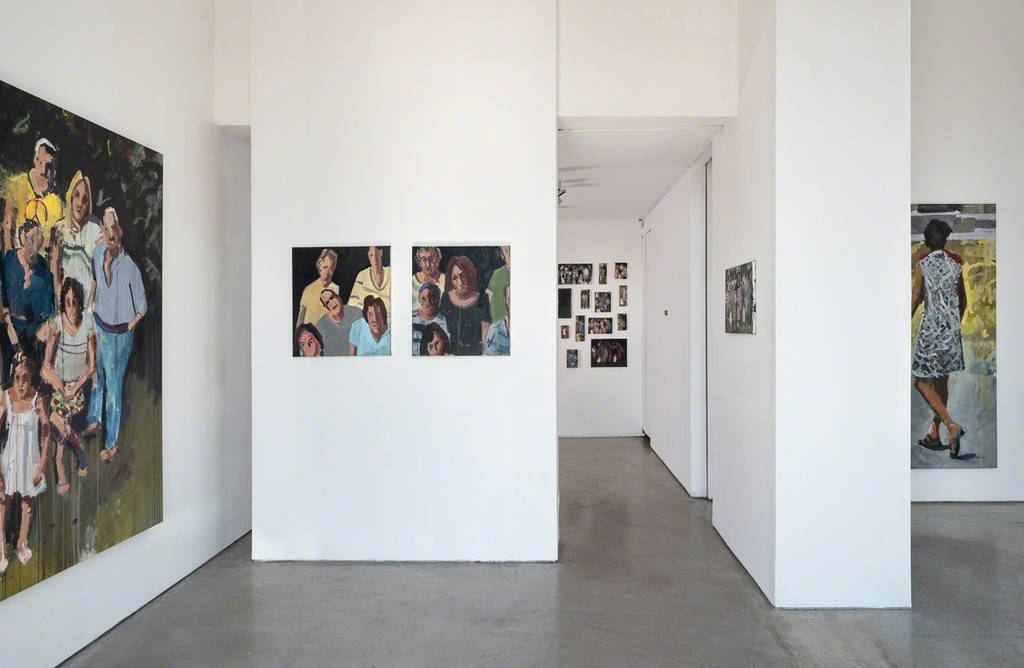 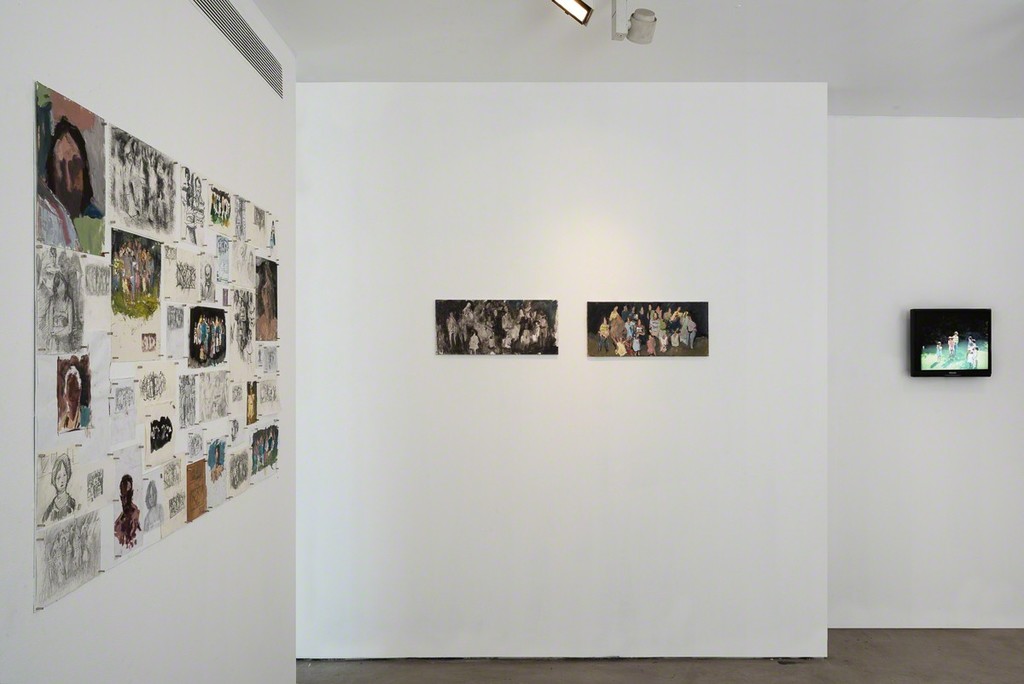 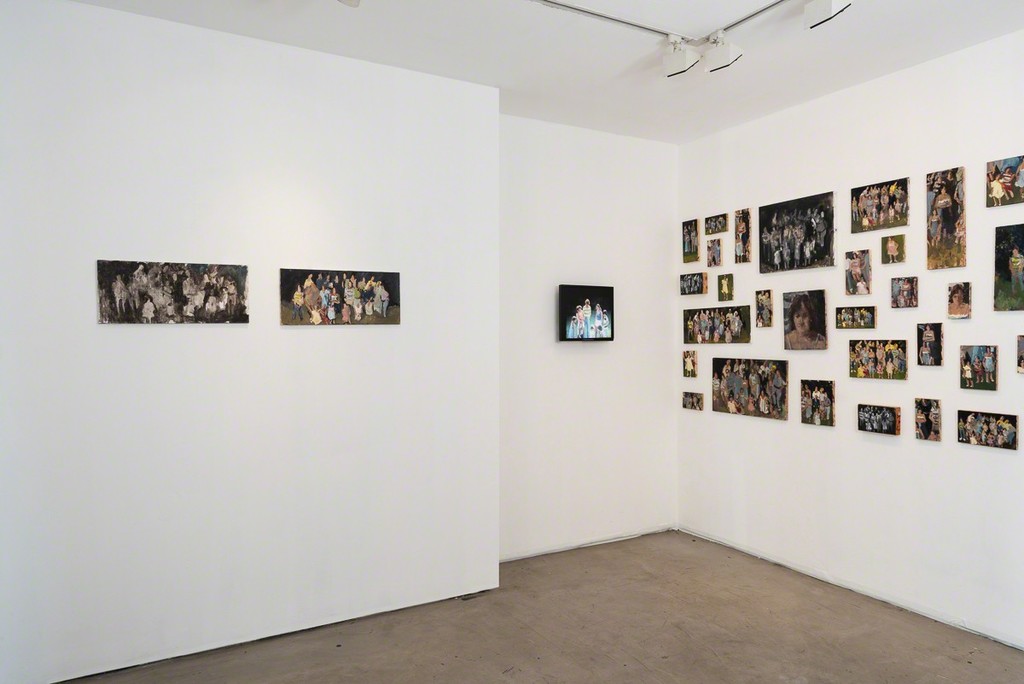 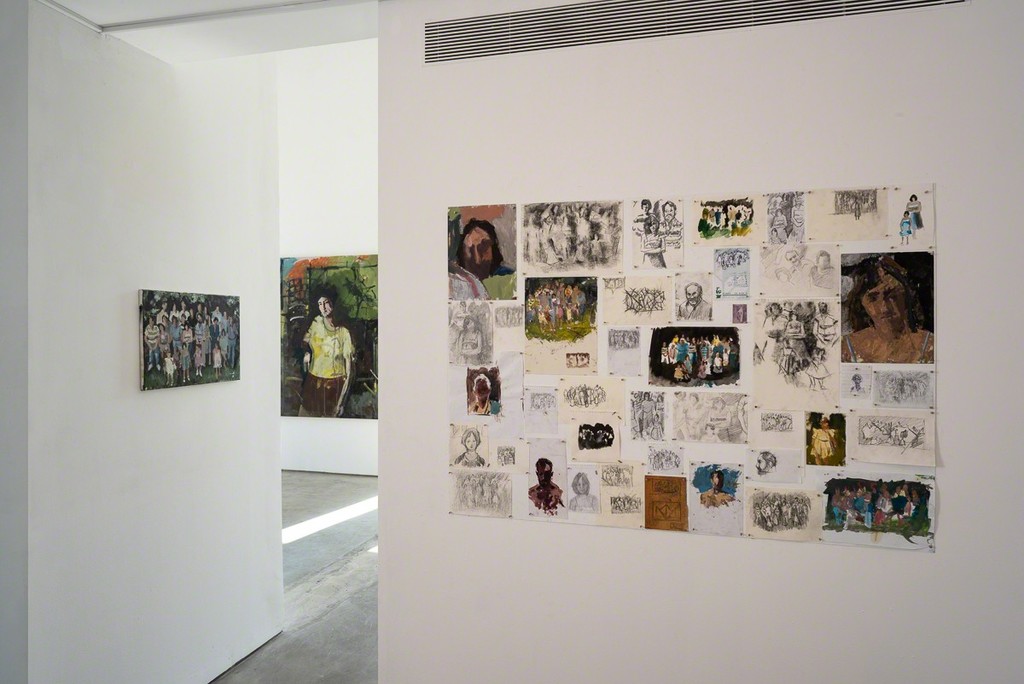 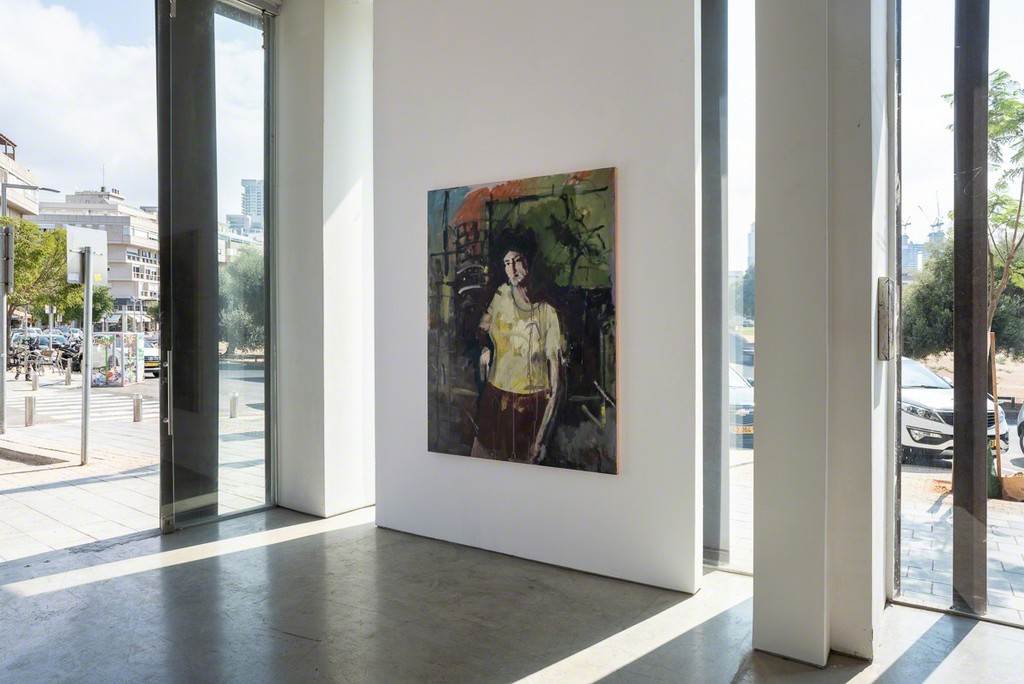 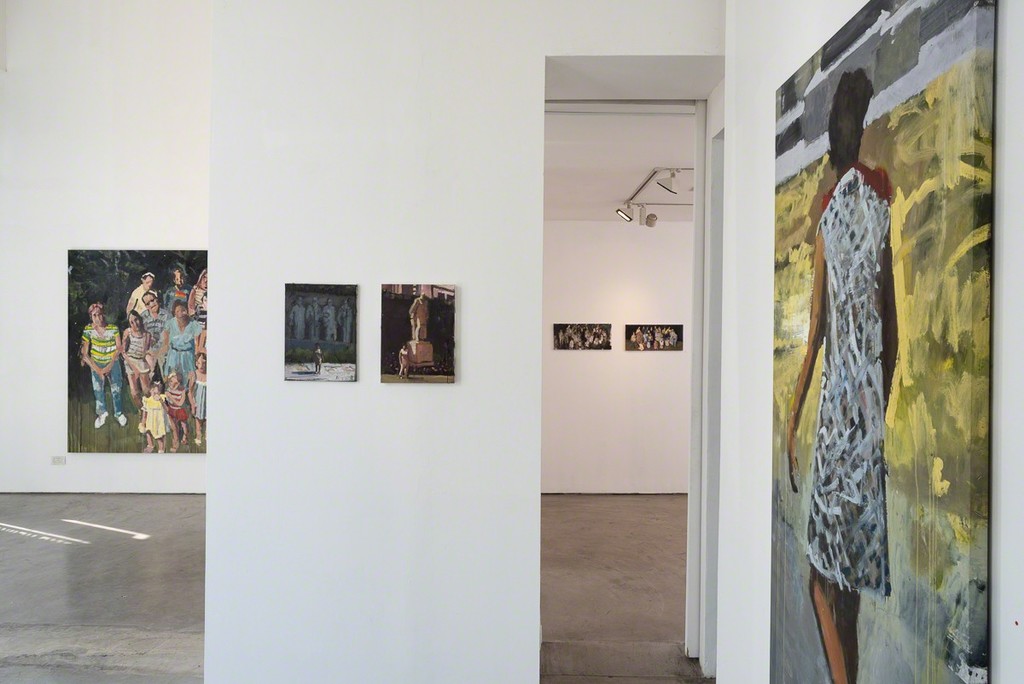 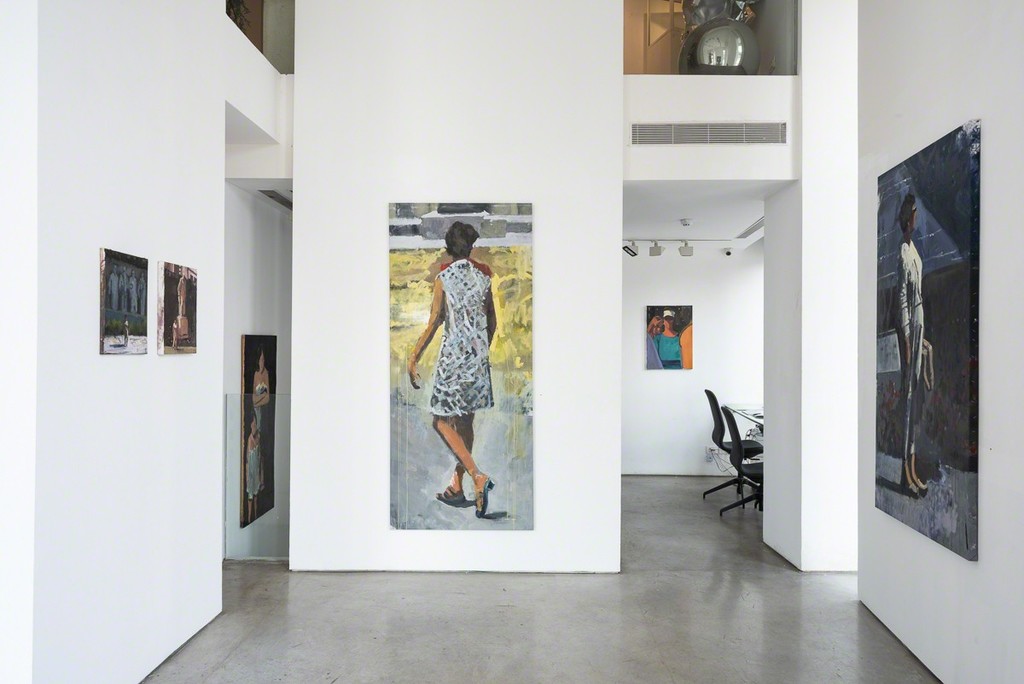 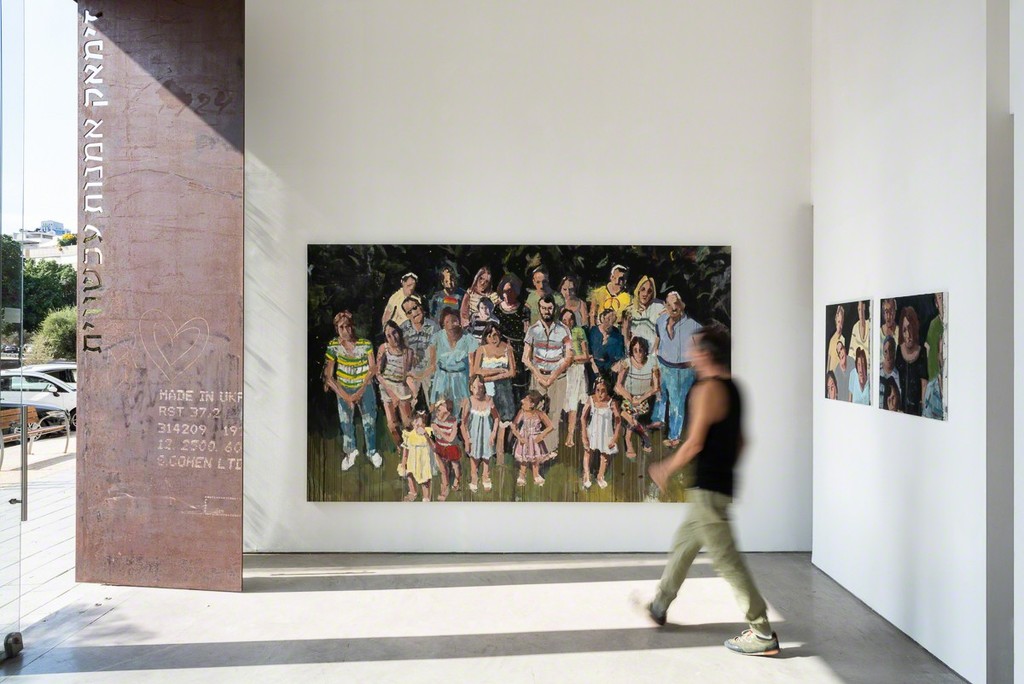 Iddo Markus | Family Matter
Curator: Yaron Haramati
A new solo exhibition by Iddo Markus. The exhibition features an installation comprised of drawings, color sketches, videos, and paintings, all inspired by an old family photo that the artist found in his parents’ home.
The exhibition presents an extensive work process set in motion following the discovery of this photograph, in which the artist exercised various photographic practices like cropping, enlarging, zooming-in, and copying using paint and formats in various sizes. This is Markus’s first exhibition that originates in one single image. It debuts the shift that has taken place in his work in the last couple of years towards a profound exploration of color, form, and image while working with different variations on a single image, as opposed to a series of a certain nature or common thread.
The central piece in the exhibition is a large-scale oil painting of an entire family standing to have their photo taken. Unlike the photograph, the painting wishes to explore more than the group composition. The painting also focuses on the individual human scenes, and the painter stands in front of the figures in a long process of breaking apart and reassembling, rather than merely for the brief moment of pressing the shutter button.
With the very act of painting, Markus brings back to life the family members who were “frozen in time” at the moment the photo was taken, in the fall of 1979. The small paintings in the installation challenge the group photographic act, in which the details are veiled to create a coherent composition. Each portrait undermines the cohesion of the photographed group, looking for the uniqueness of each individual, movement, expression, feeling. Building on the viscosity of oil paint, Markus carries out a deliberate intervention in the group photograph, like a researcher who meticulously observes each individual parts. With a keen eye and expressive hand, he creates singular distortions in the figures, disrupting and embedding fictitious elements or unearthing others that lie beneath the surface of the family photo. And so we get to experience both the unifying group expression, frozen in time and fashion, that create a “familiar” 1970s family atmosphere, alongside an intimate observation of the individuals, born from the act of painting over time.
Miraculously, during the preparations for the exhibition, an 8mm film was discovered in the family archive. The film, which will be projected in the exhibition, captures the various figures a few seconds before the photograph was taken. The encounter with the moving figures alongside to the photo and paintings, transforms them into ghosts of sorts, imbuing the frozen photo and paintings with life and mythical quality.
The three mediums – photography, video, and painting – introduce the question of the gaze that establishes the image: what is the relation between the photographer’s gaze and that of the painter and what meaning does each visual expression produce? These questions emerge from the artist’s shift between the mediums. The uniqueness of the installation lies in its ability to formulate a contemporary position by using the classic painting medium, as Markus has done in the past with large-scale installations of miniatures.