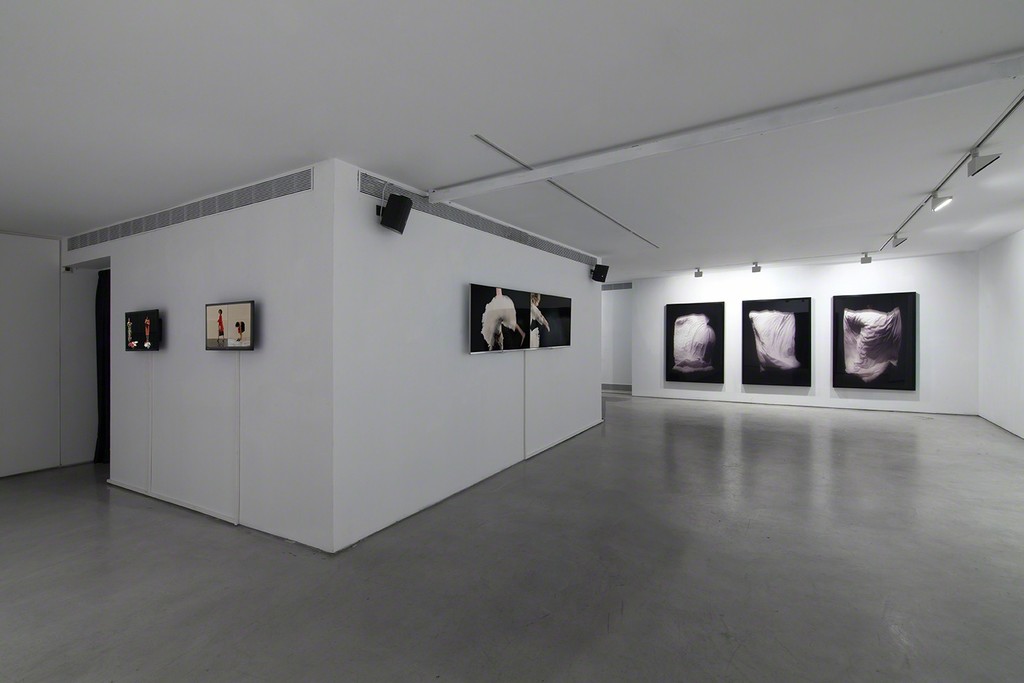 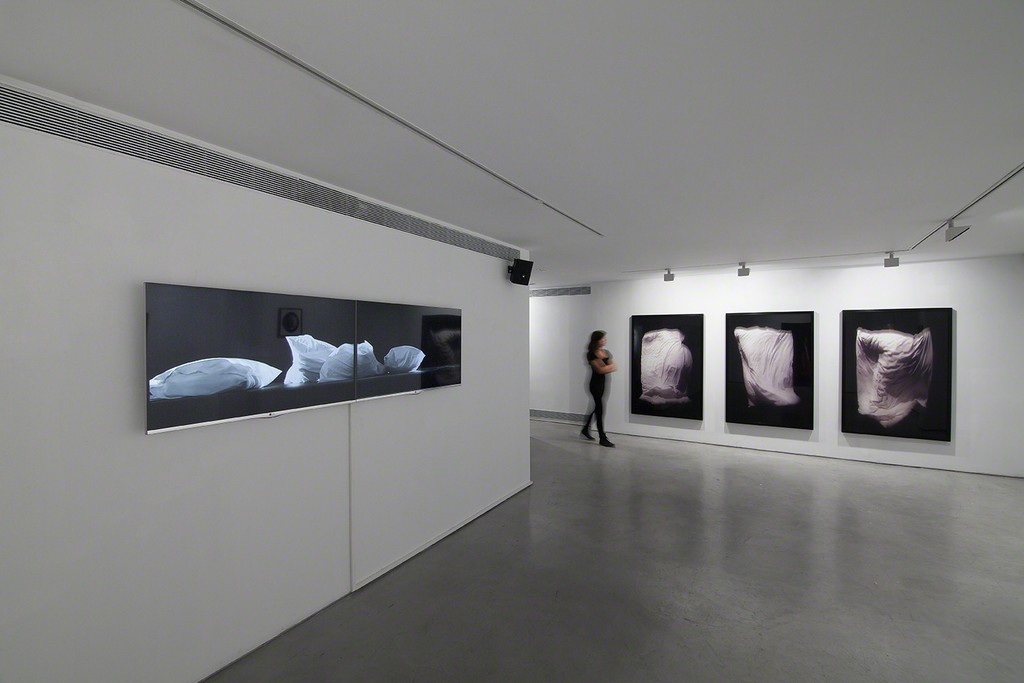 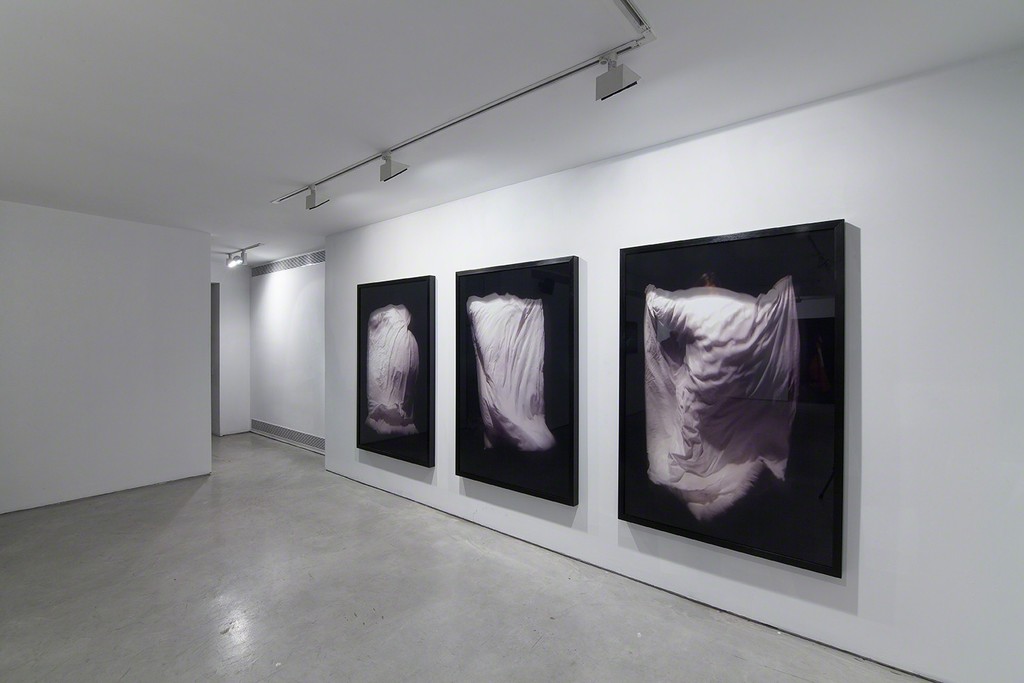 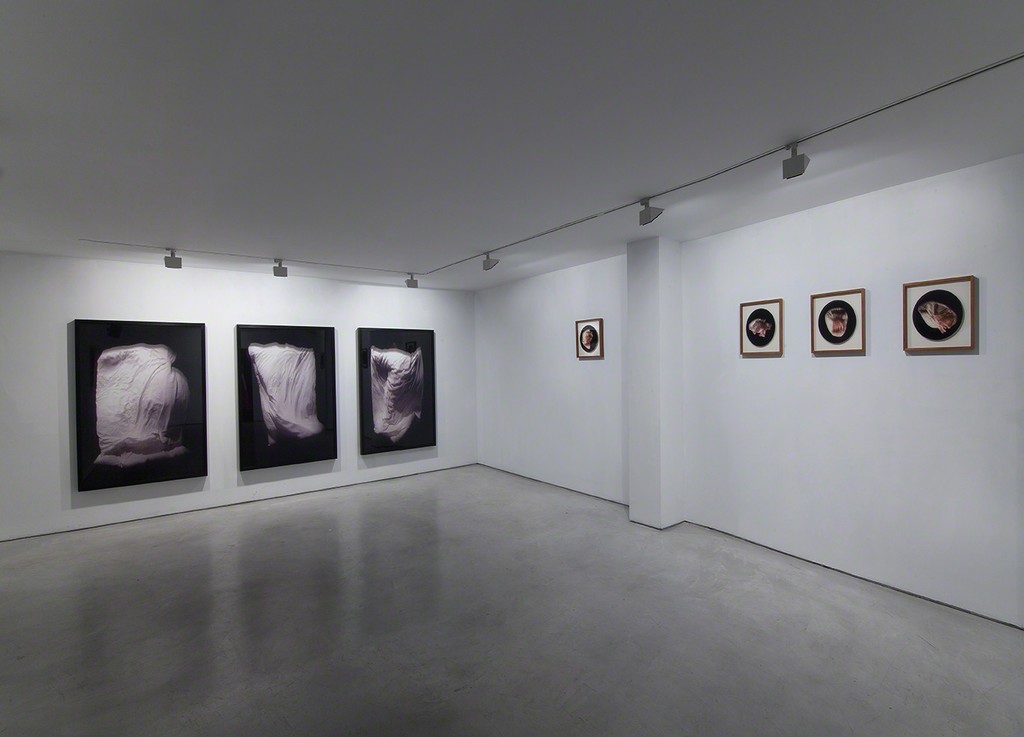 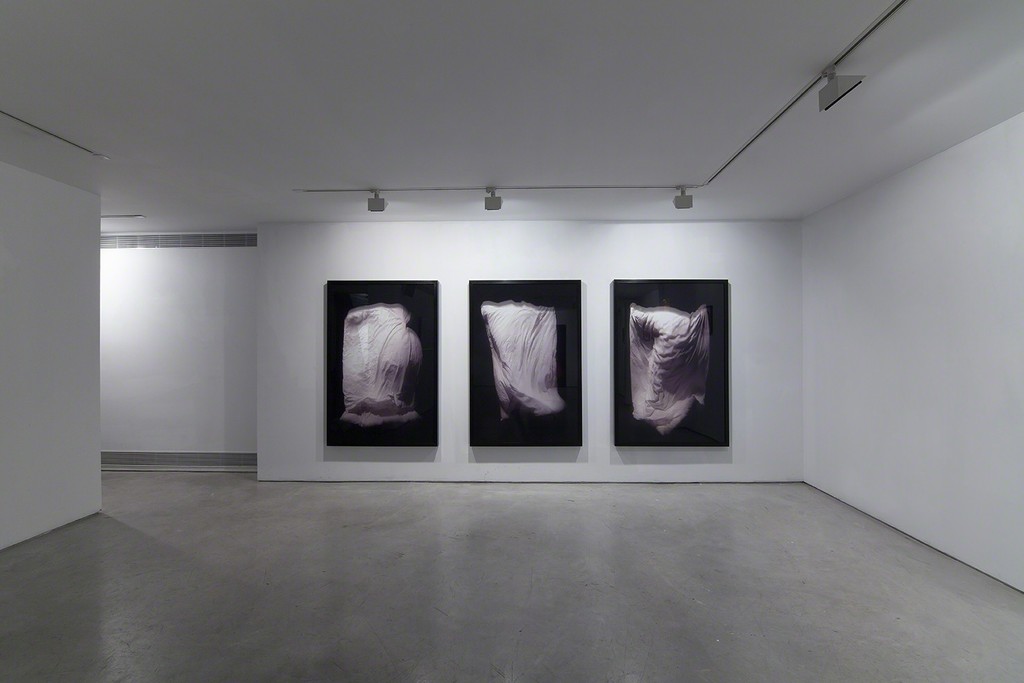 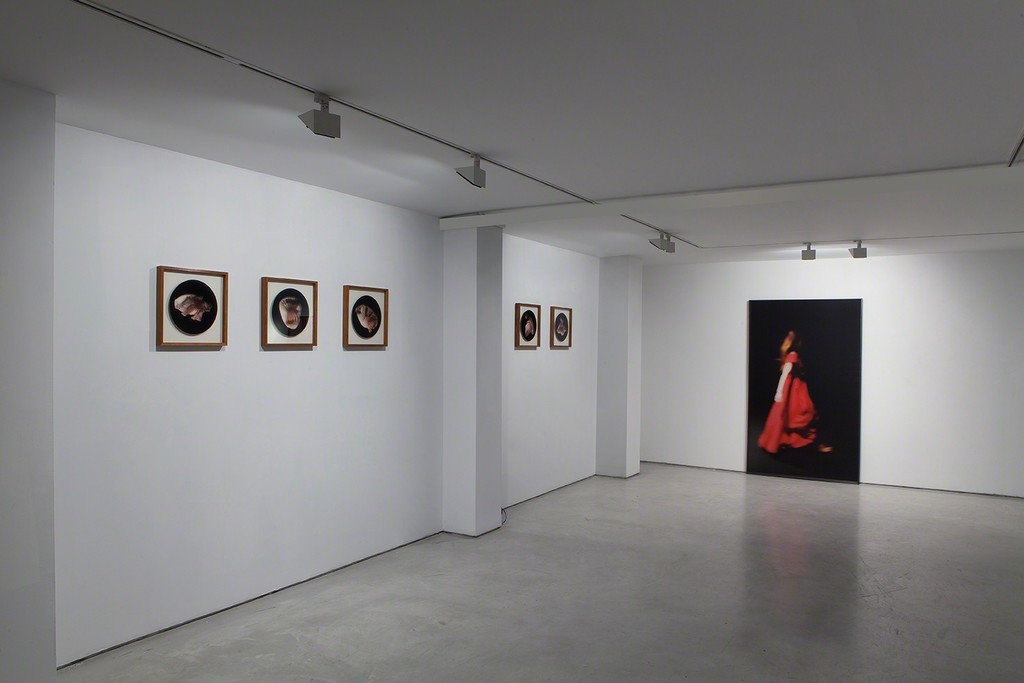 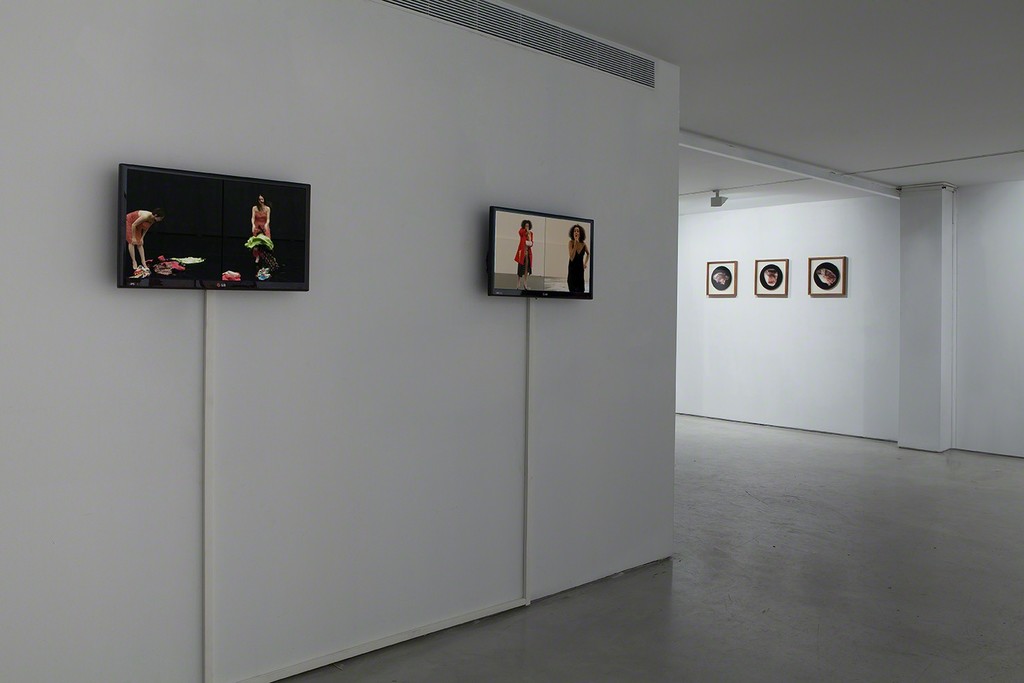 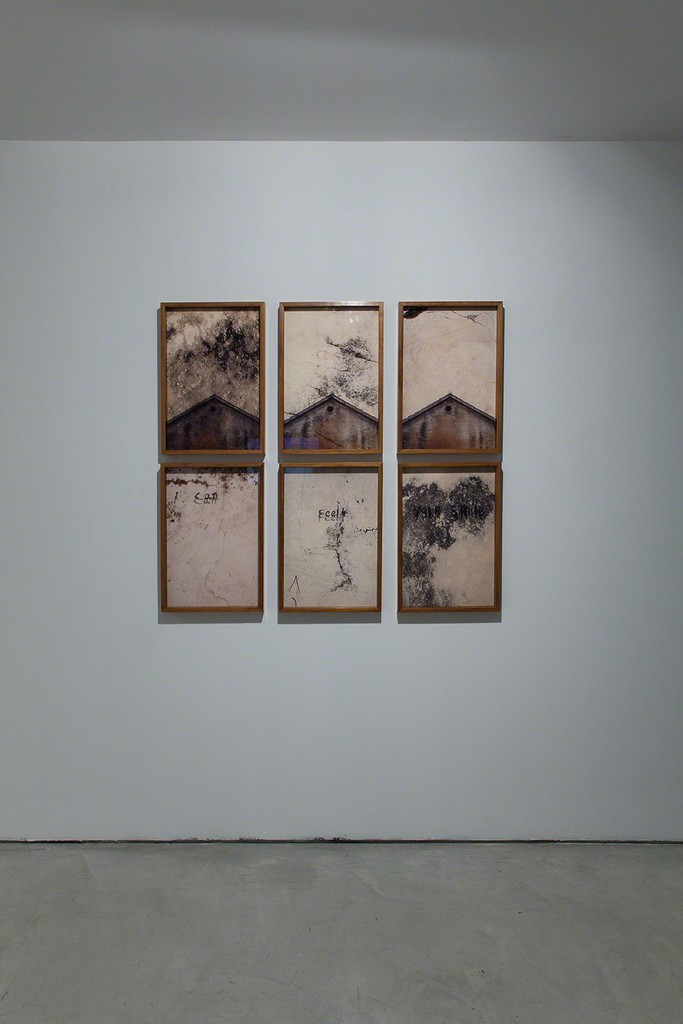 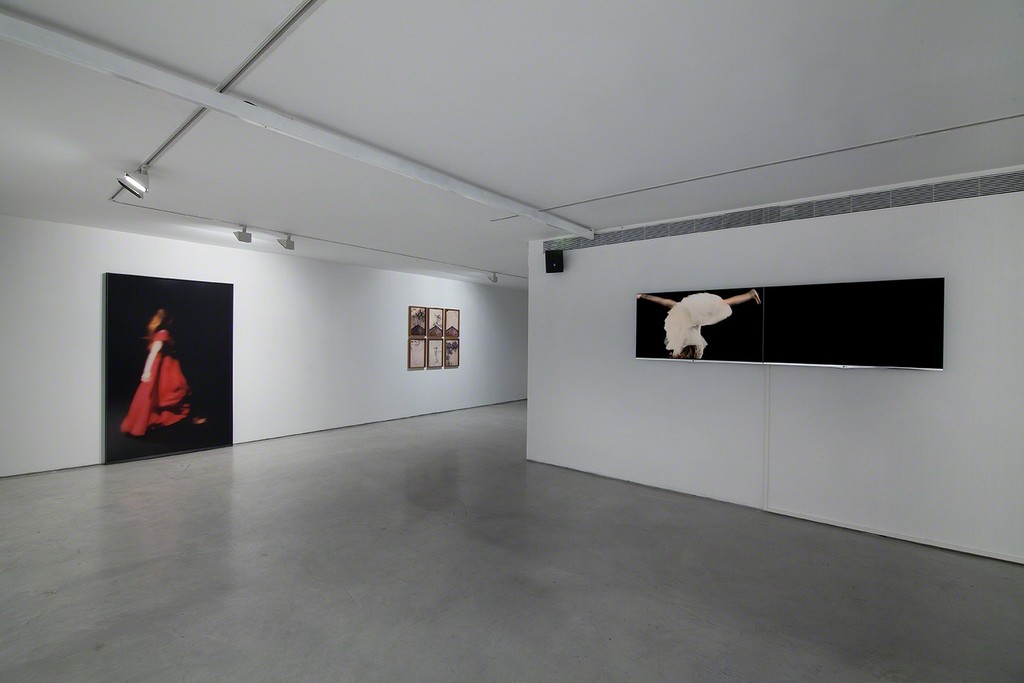 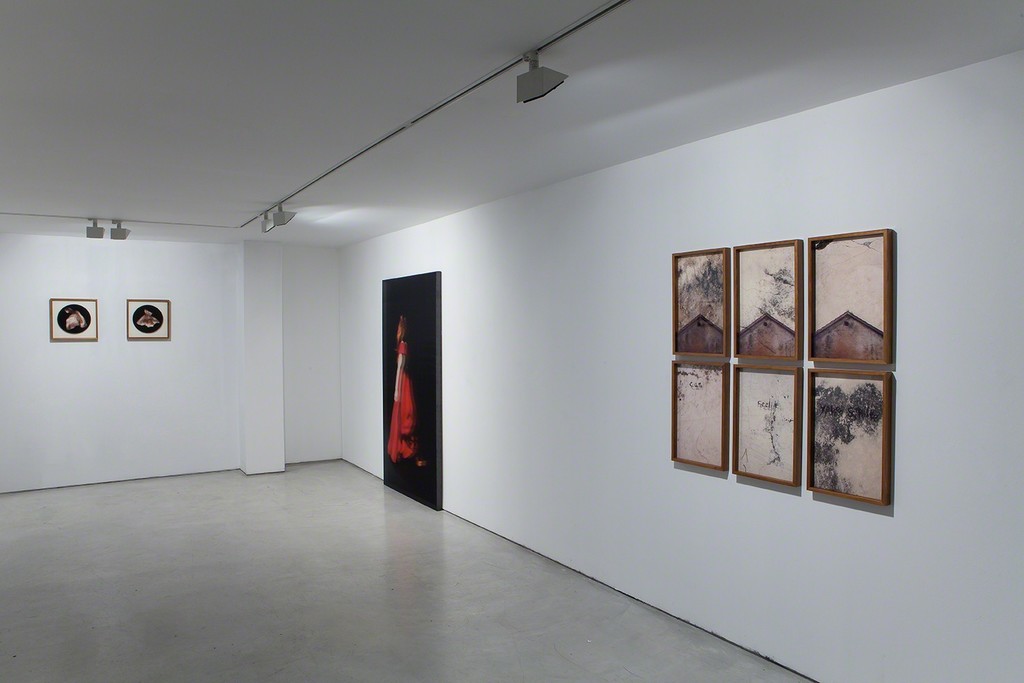 In her new exhibition Rooms, held at Zemack Contemporary Art Gallery, Lee Yanor presents a set of theatrical pictures that delineate a fragile and vulnerable mental space, where we find figures trapped in timeless time, between what already took place and what is yet to come. Yanor’s figures, women in different stages of life, emerge from the works like illusive memories, private phantoms that formulate a fragmented nonsequential narrative. They divulge a reflective, pensive mood, at times obsessive and hysterical, and conduct themselves with directness and simplicity channeled to the execution of a mundane, seemingly trivial action.

The exhibition covers the two levels of the gallery, using the space and its architecture as a tier that enhances the human narrative embodied in the videos and photographs. It is a site-specific installation that seeks to transform the space of the gallery into an arena of domestic events, which holds the familiar and menacing at the same time. The presence of Yanor’s women in these works is elusive; they look straight at the viewer, as though confiding in him at an intimate moment, a second before they fade into another existence, away from the tangible space of the gallery and the visitor’s mind.

The works featured in the exhibition constitute a feminine display that celebrates women’s beauty, profundity, and complexity. The artist brings together with great sensitivity portrayals of young girls and depictions of mature women, in the aim of reflecting on processes of change, maturing, and soul-searching. While these works are not political in essence, they contain the echoes of the poignant criticism regarding the representation of women expressed in 1970s and 1980s feminist art.

The video work Full Moon, presented at the entrance to the gallery, serves as a key to the entire exhibition. The figure of Barbara – a mature dancer and actress –emerges in all her beauty in several short acts, like in a surrealist play. Besides her flickers an image of a full moon that imbues her image with mystery and melancholy. Some of her actions are purposeful, and others are performed by inertia, revealing freedom of action like that found in theatrical improvisation. Barbara presents a determined and poised position of acceptance of the passage of time and its signs. She summons intimacy that grows from familiarity, and embraces processes of change from a place of completeness. However, at the same time she is also moonstruck Barbara – free and unpredictable, with a lust for life and freedom – who looks at the past reflected through the two adjacent works: Lenny and Homecoming.

The video work Lenny focuses on the figure of a girl who exudes innocence and tenderness, like a renaissance Madonna on a medallion. The girl is seen gracefully picking petals off a flower, bashfully mumbling questions about love; little tentative questions of adolescent fragility contemplating a future promise. At her side we find the video Homecoming, which portrays a girl’s dress floating in a disturbing cinematic slow-motion. Trapped in an indefinite temporal space, the orphaned dress brings to the fore an uncanny feeling that generates discomfort and disorientation in the face of something which is paradoxically familiar and foreign at the same time.

In the lower level of the gallery Yanor offers a more distant observation, a series of casual remarks on representations of women and femininity that demonstrate an anachronistic attitude. The series of photographs entitled Blankets corresponds with the material approach of ancient classical sculpting, in which sculptors found an interest and a challenge in a realistic portrayal of rich draperies that veil the nude body. In this series, the female body is almost completely absent, leaving only glimpses of exposed fragments (a pair of hands, a small part of a head) and the place of the feminine silhouette is replaced by a solid mass of inanimate material simulating a sculptural stone. Beside it we find the series of photographs Dresses. While it does not feature any nudity per se, the series alludes to a veiled sexuality, when what at first seems like an almost abstract image turns out to be the inside of a girl’s dress, hovering in the middle of the frame empty and bodiless. The image, presented from a low perspective that exposes the hidden side of the dress, holds powerful beauty alongside latent violence.

The video works I Have To and I Want to See the Sea display improvisational theatrical situation at the center of which stands a female figure that performs a physical action while reciting a monologue. These are obsessive women on the verge of a nervous breakdown. Like the stereotypic pattern of the hysterical women in the 19th century, and later the cinematic women of Almodovar, their charm stems to a large degree from their unstable mental state. Legato, a two-channel video work, is based on values of movement, time, and space and the relations weaved between them. With three elements, in three acts, the work examines the application of the physical laws of gravitation, inertia, and velocity, on body volume and object mass. The event, which has no linear narrative, draws on cinematic editing manipulations to demonstrate seemingly impossible situations that merge opposed parameters (heaviness and lightness, mass and absence of volume, and deceleration and acceleration). The work Maria, a single photographic frame, features a woman seen from the back; her red dress emanates mesmerizing Baroque sensuality. This is an enigmatic anonymous figure that fades into the darkness of the chiffon material on which it is printed. Maria’s absent-presence leaves behind a sense of emptiness and sadness. The series Untitled is comprised of three photographs that portray fragments of sentences drawn as a brushstroke on an image that brings to mind a marble slab, and three photographs that feature an image of an architectural construction reminiscent of a house. The juxtaposition of the images engenders a sense of belonging and returning home as well as alienation and strangeness, underscoring the dualistic feeling that imbues the exhibition.

Yanor’s works are formulated for the most part as a personal riddle that defies easy deciphering. They strive for the ambivalent and hold a conceptual duality in the desire to establish mental transformation. Under the shell of refined aesthetics and powerful beauty, deep emotional charges teem beneath the surface, a mixture of lonely and bottomless pain blended with cautious optimism, resignation and acceptance. Potential danger and violence reverberate through the works, and summon for the visitor an intensive viewing experience.

The exhibition Rooms oscillates along the subtle frequency between creating an intimate space, a room of one’s own that provides a safe place in which the woman’s secrets and desires are revealed, a space for reflection and introspection, and a window to a fixed social consciousness rooted in stereotypical male perceptions of the female figure.