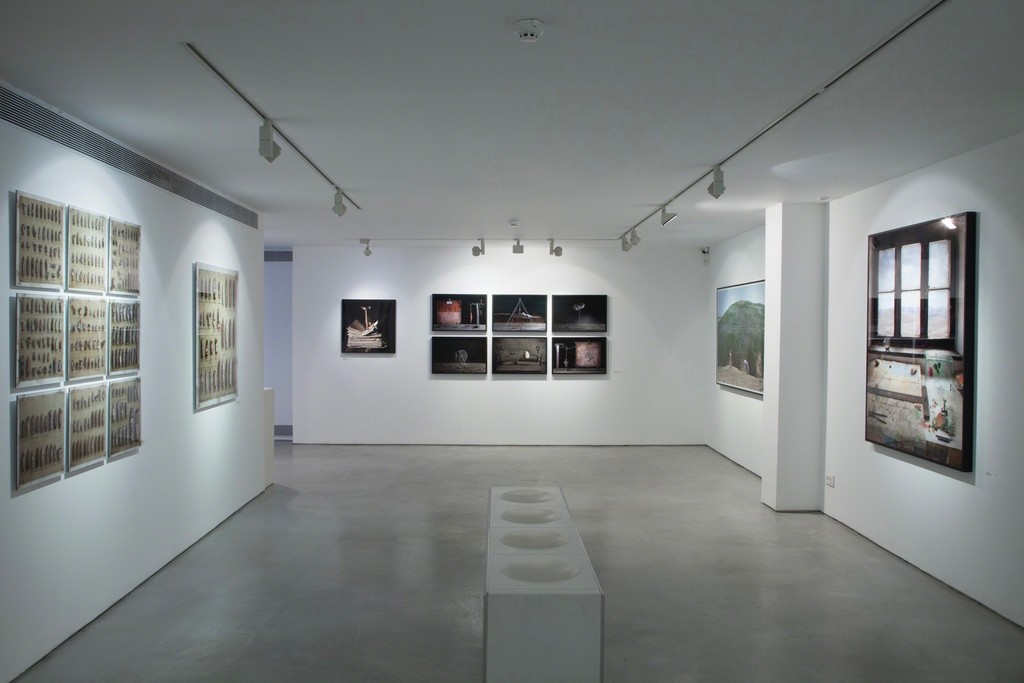 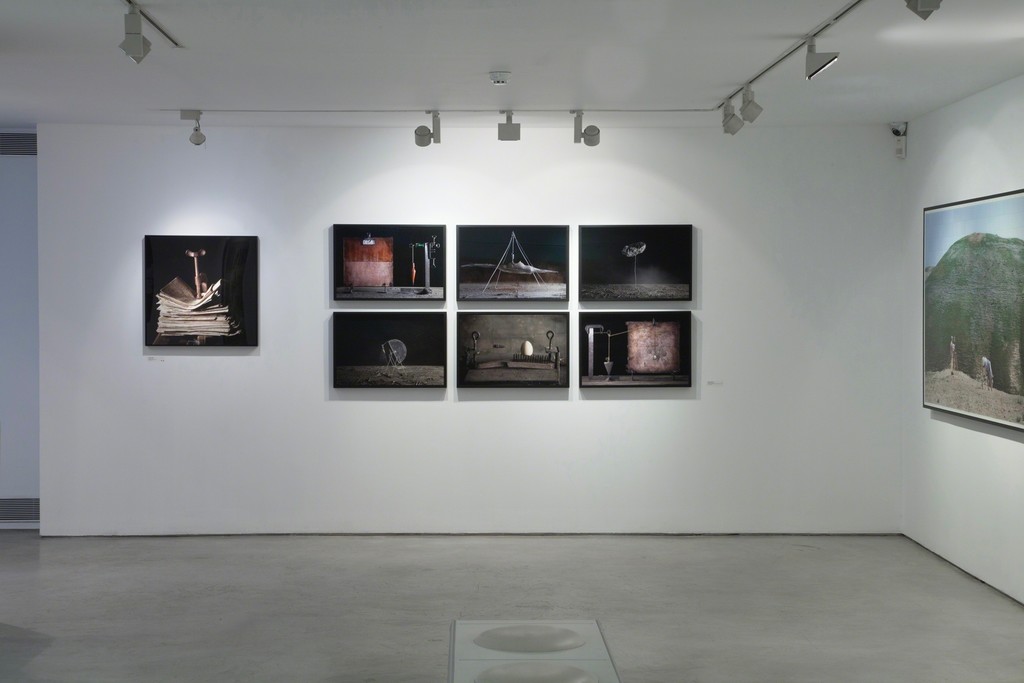 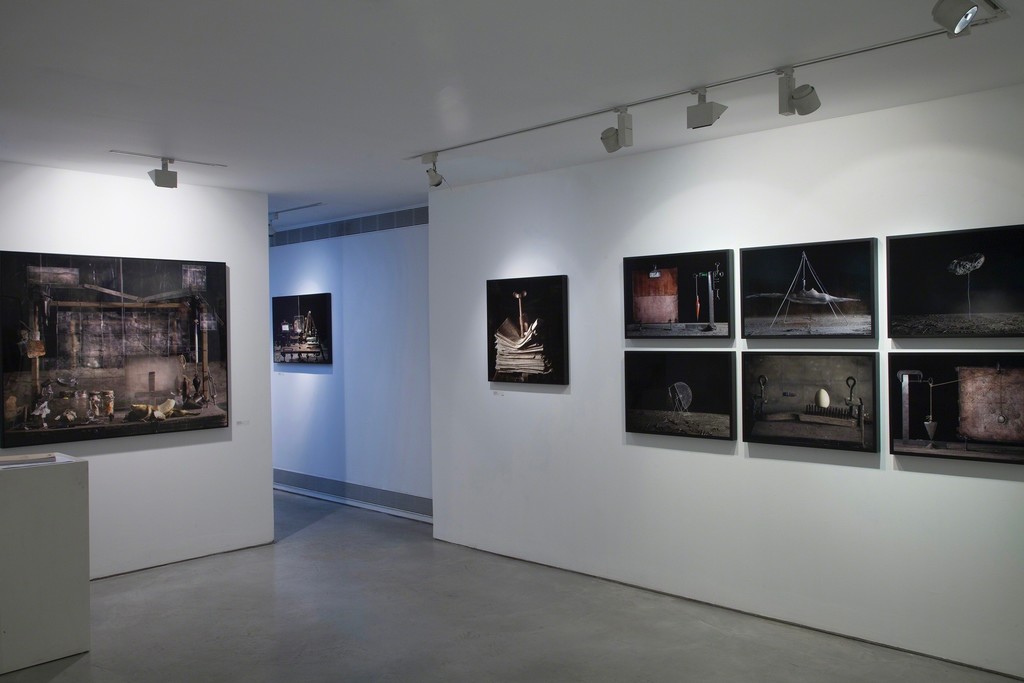 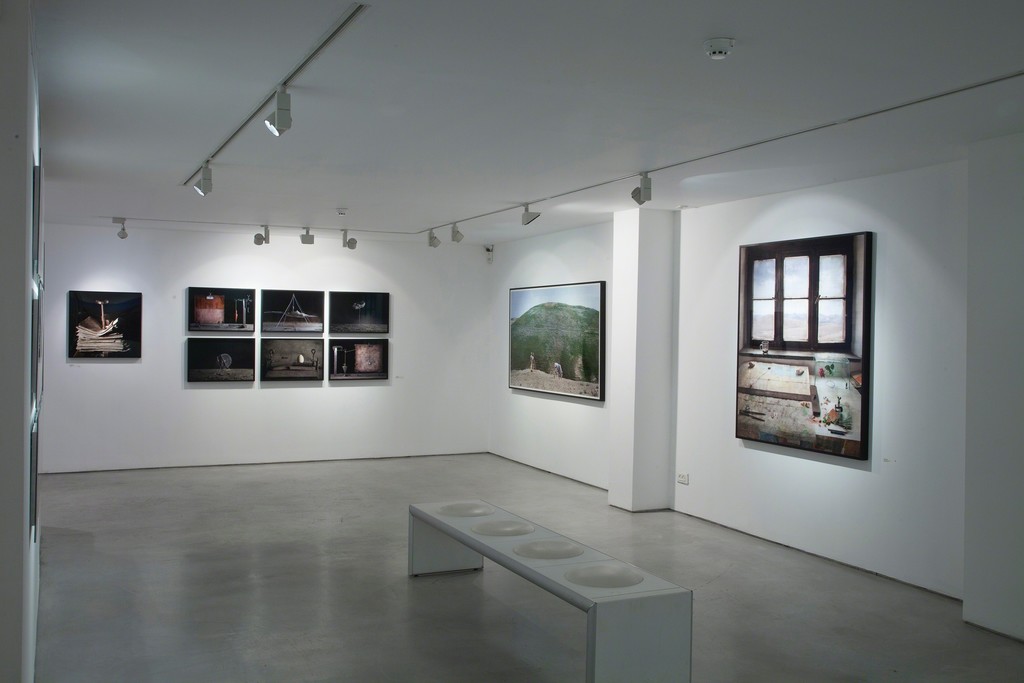 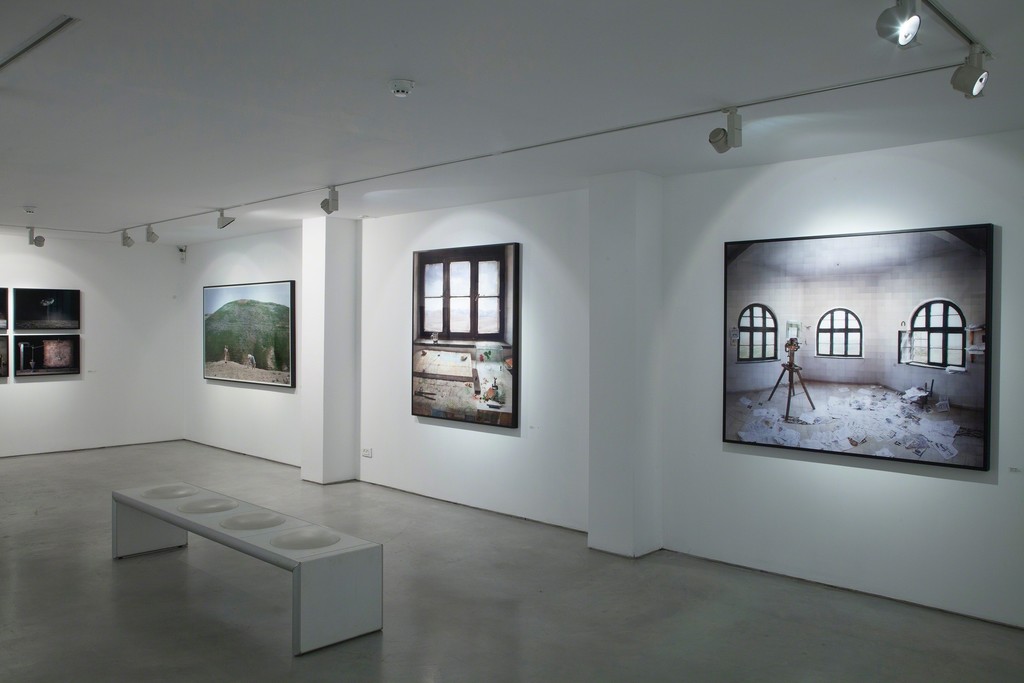 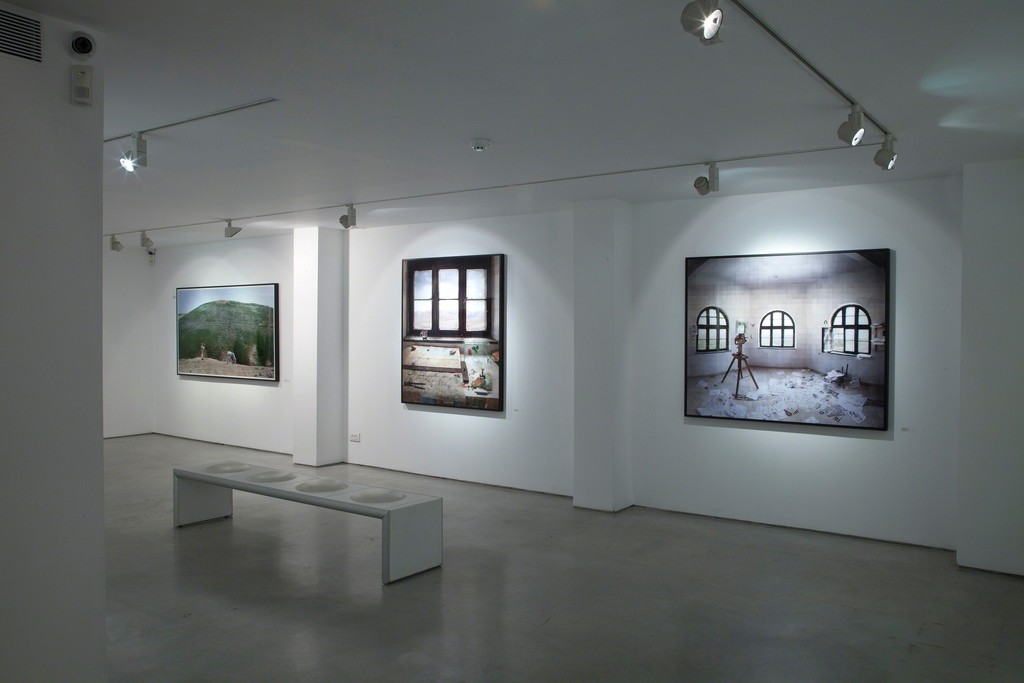 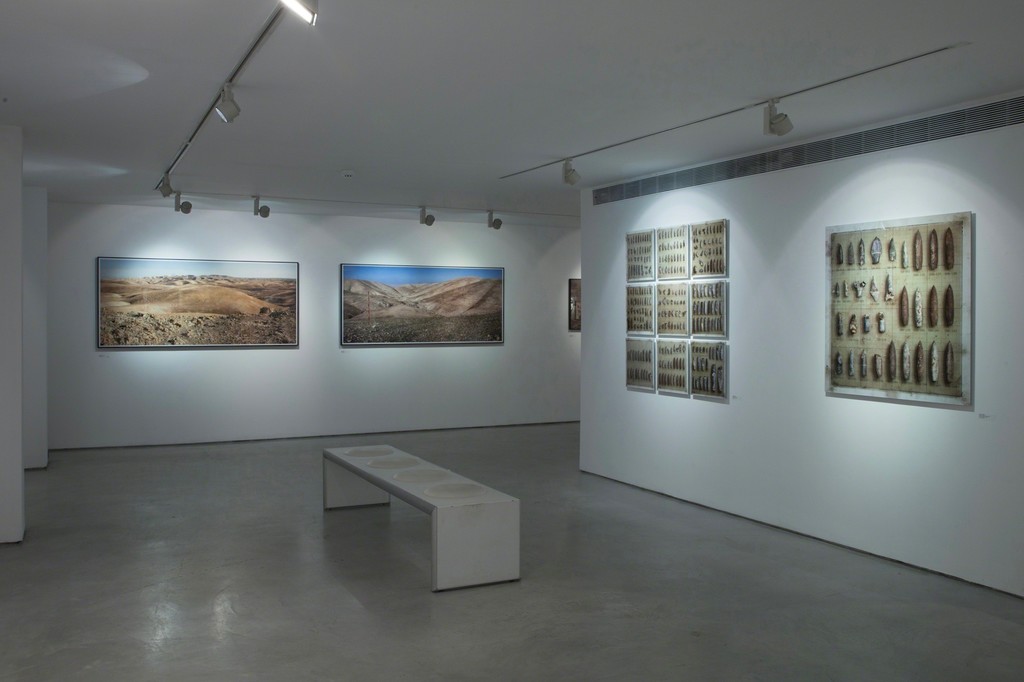 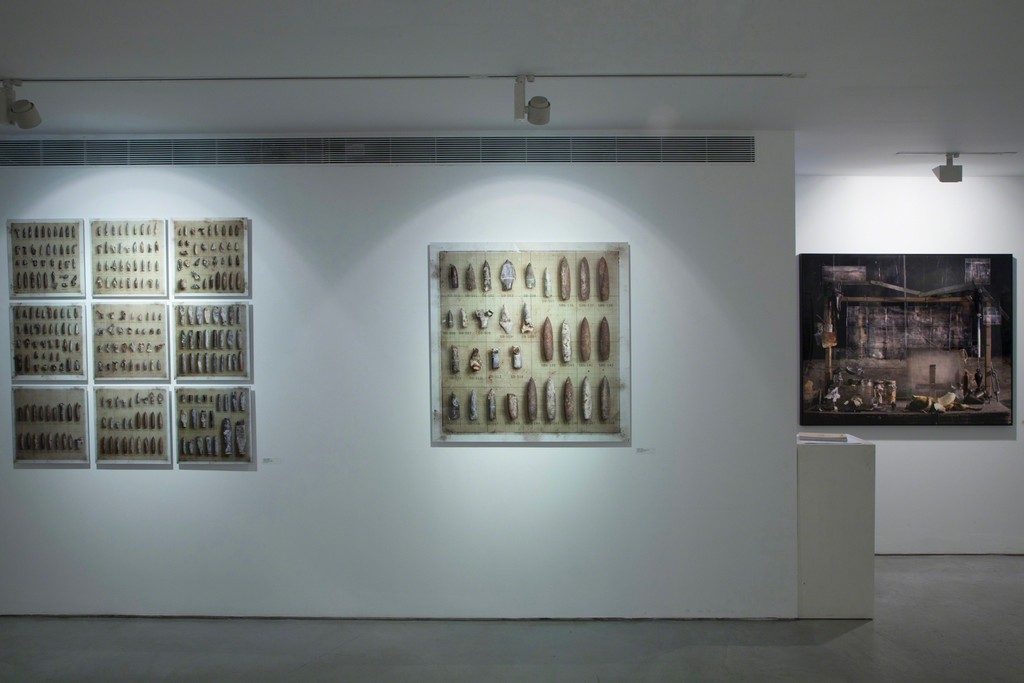 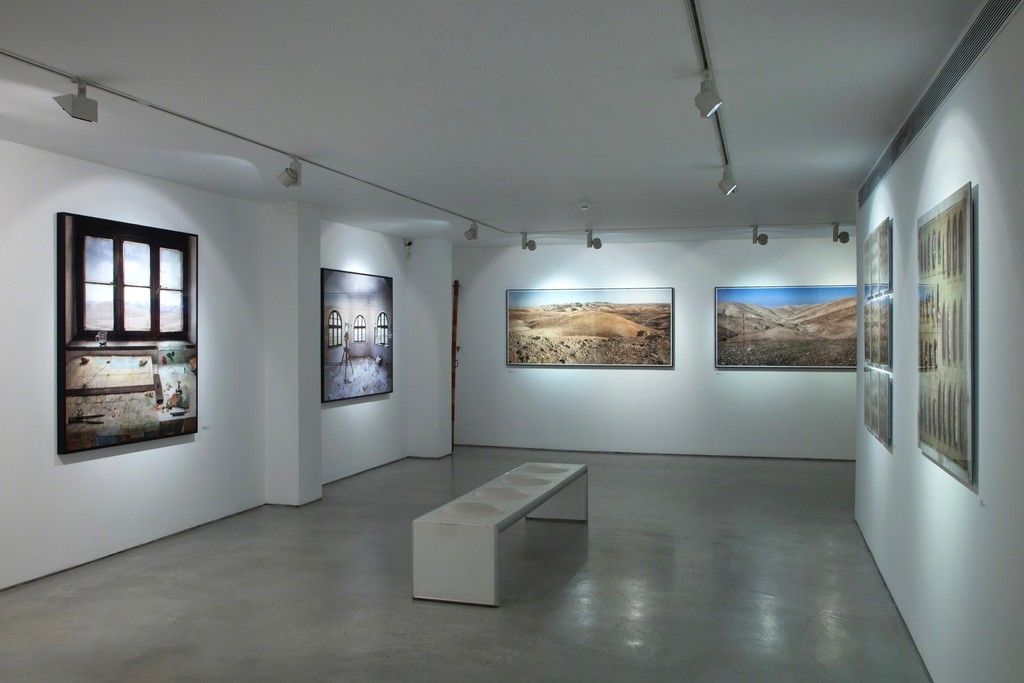 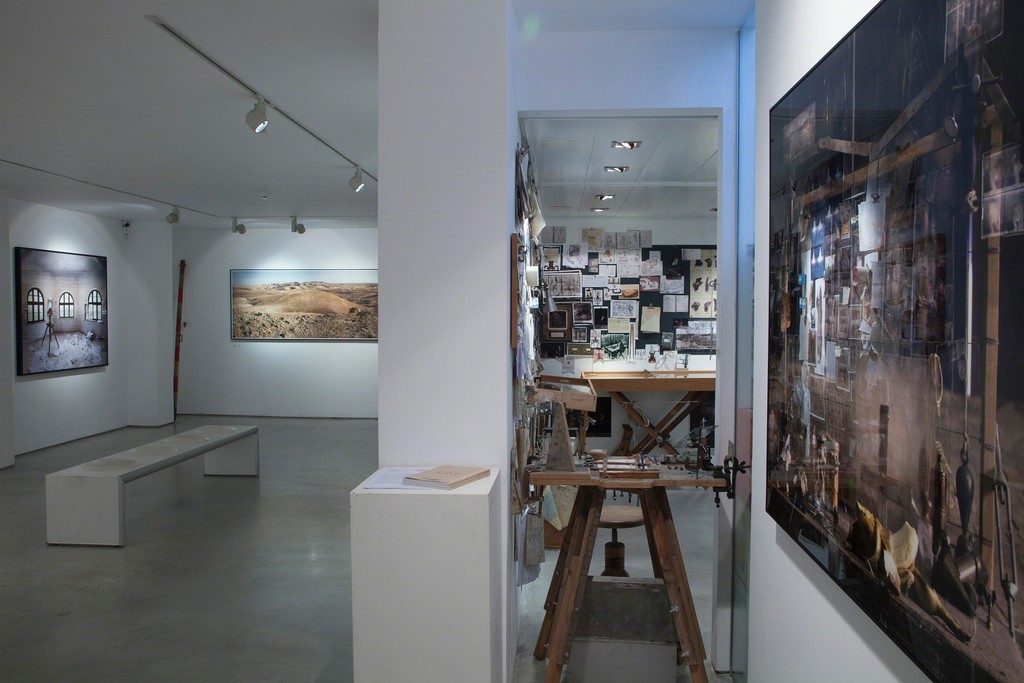 In his current works, Yuval Yairi adopts the figure of the “surveyor” as a partner and vision aid for looking out at the place in which he lives, and for introspection and personal soul searching, trying to come to terms with certain chapters in his past.

The surveyor’s role, which Yairi has performed for years as an aerial scout, at peacetime and mostly during wars, has left a deep and traumatic imprint on him, to the point of a split into two personas: the artist and the surveyor.

The exhibition comprises new photographs and an installation, in which Yairi transforms one of the spaces in the gallery into a room packed with measuring devices, diagrams, illustrations, and findings. The juxtaposition of the two entities that drive his artistic practice: the artist (the civilian) and the surveyor (the soldier), who share a common language, is the subject of the piece that forms a bridge between code, north, and conscience. These – which share the same root word in Hebrew צ.פ.נ – allude to the core of the human desire to roam, search, explore, and inquire, to orient oneself and to discover.

From the surveyor’s perspective, the mountain, the trail, the valley, and the terrain, are sites to be detected and delimited on a grid of latitude and longitude lines. The surveyor encapsulates the site and the landscape, replacing them with a codified set of fixed signs that facilitate orientation. The landscape is silent and quiet, yet in the language of surveyors and scouts, it is teeming with signals and signs. Built or vacant, deep or flat, innocent or hostile – the landscape view is deciphered into a familiarity with its intricacies. The surveyor’s view soars to the heights, way above the terrestrial scale, a bird’s eye view that looks down in a way that captures the place, land and town far beyond the familiar field of vision available from a standing height. On a higher plane, above people and land, the surveyor observes the space and the relation between the items in it. The distance and perspective provide him with power of control. The physical detachment from the ground allows him to perform his task in purportedly clear conscience.

The poetics of Yairi is his artistic ability to use disruption and assembly to create an accumulative photography of a timeless space. The act of disassembling and assembling a photograph allows Yairi, like in an archeological dig, to string together different nonsequential times, events, and places – into a multilayered moral space where time is also compressed. The symbiotic relations between surveyor and artist, the conscious and the subconscious they sometimes stand for, are the motivation for creating the photograph with its stratified components.

The surveyor’s room is full of old measuring tools predating the age of satellite navigation. Measuring devices geared towards what human senses are capable of grasping and perceiving. Their operation relies on gravity, optics, or spatial perception. In all of his objects, the mechanism is visible and discloses its operation. Upon his return to the terrestrial, he gathers and discovers bullets and findings from bloody battles in an empty silent landscape. Back in his room he sorts, photographs, examines, and catalogs his findings.

The exhibition comprises two practices: the artistic practice that presents landscape and still life photographs in which the artist incorporates diagrams, models, objects, and findings from their shared world. The second is an archival-research practice that reveals the sources of inspiration and work process of the surveyor and the artist, together and separately.

The surveyor’s language is known and common in the artist’s conduct, through which the findings gain new interpretation and meaning. The works of the artist, the second figure that operates in Yairi’s art, sets the surveyor’s finding in a new and complex association. The tools, bullets, diagrams, maps, vision devices, and measuring instruments are photographed separately and reassembled into one piece. The pieces presented in this exhibition are the product of the artist’s devoted and laborious ability to sew the quilt of time and place in order to take on the question of identity and of morality. The artist conceals hints and symbols from the surveyor’s world, though uncovering the finding of a sealed and hidden black box.
Text by Etty Schwartz