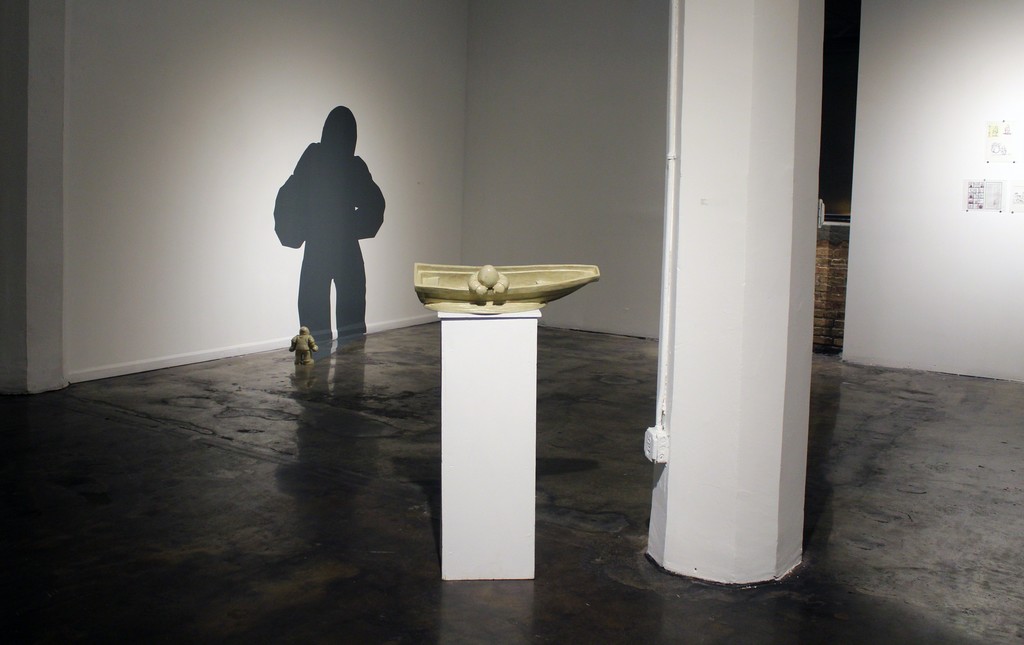 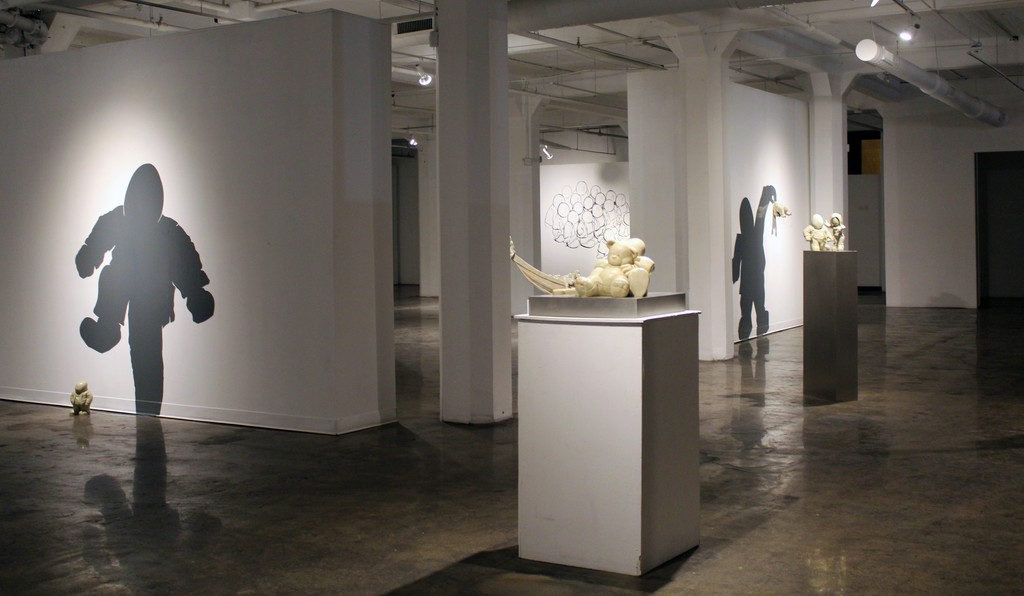 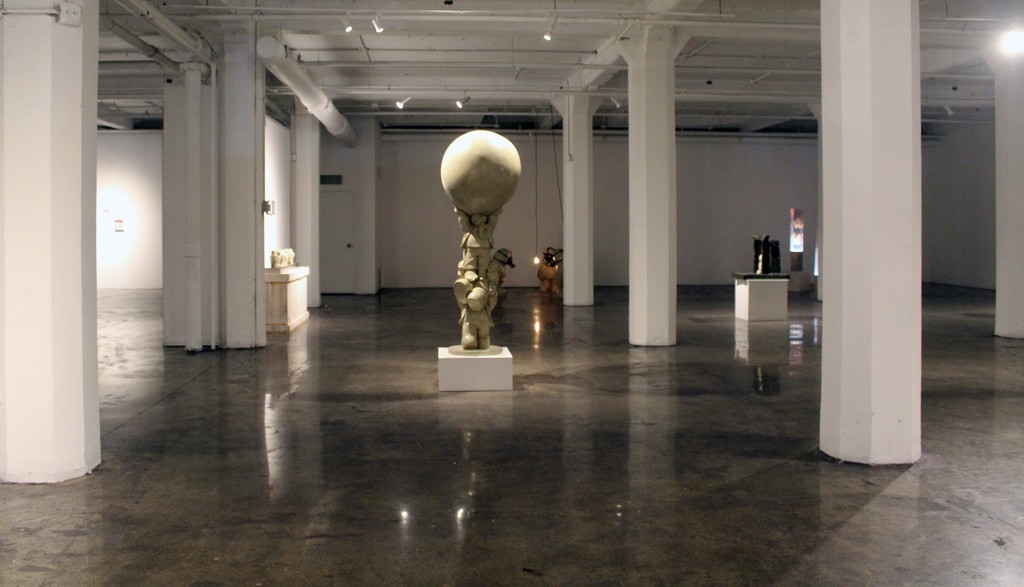 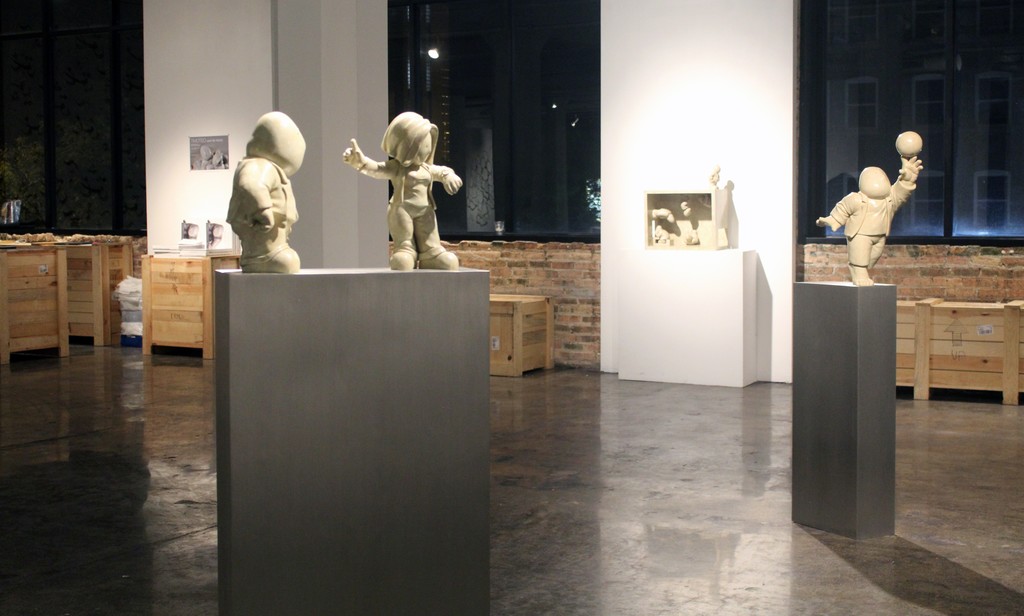 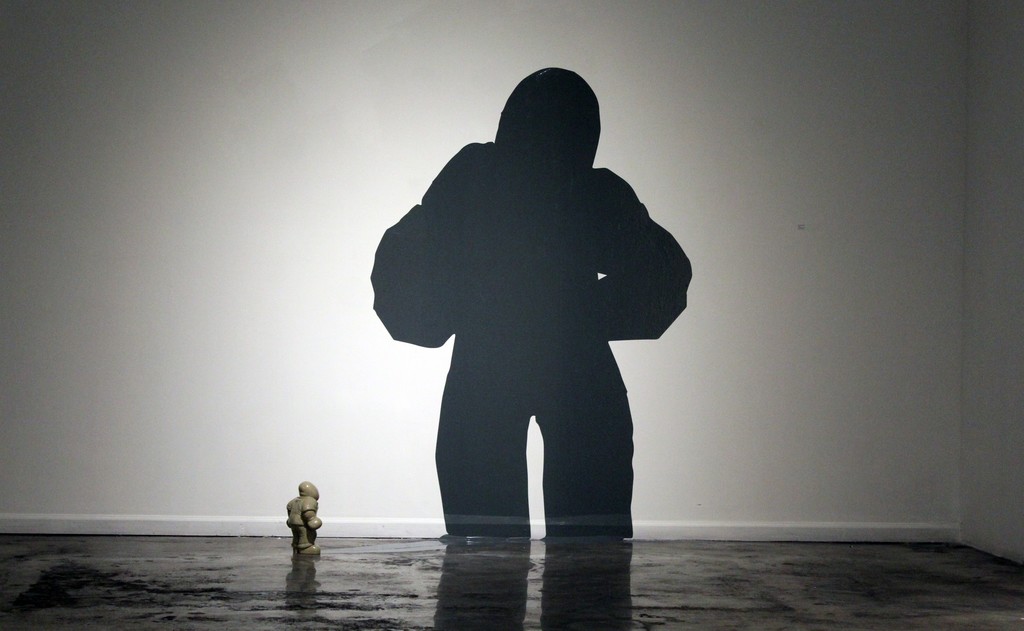 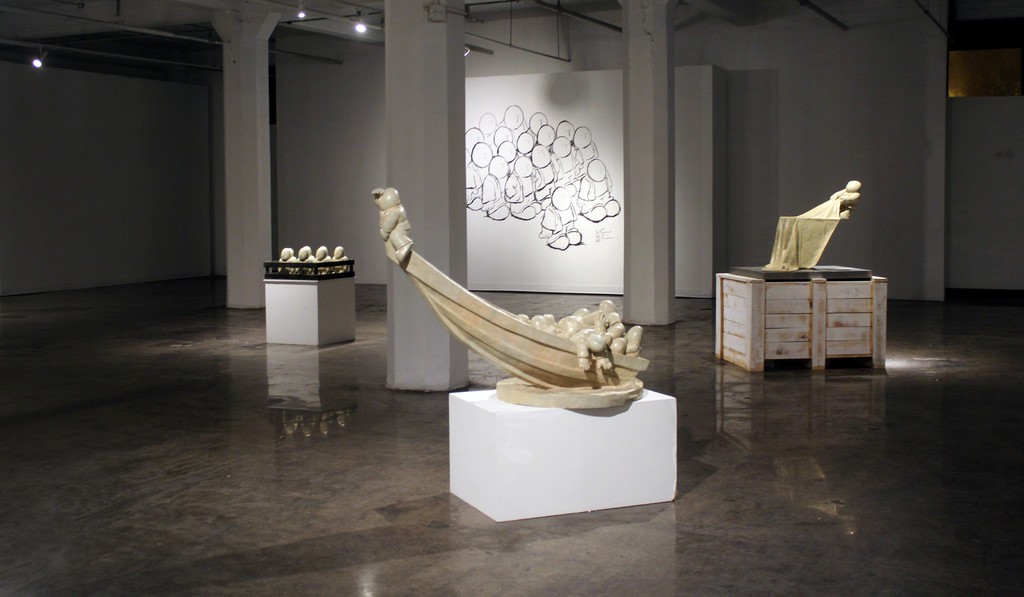 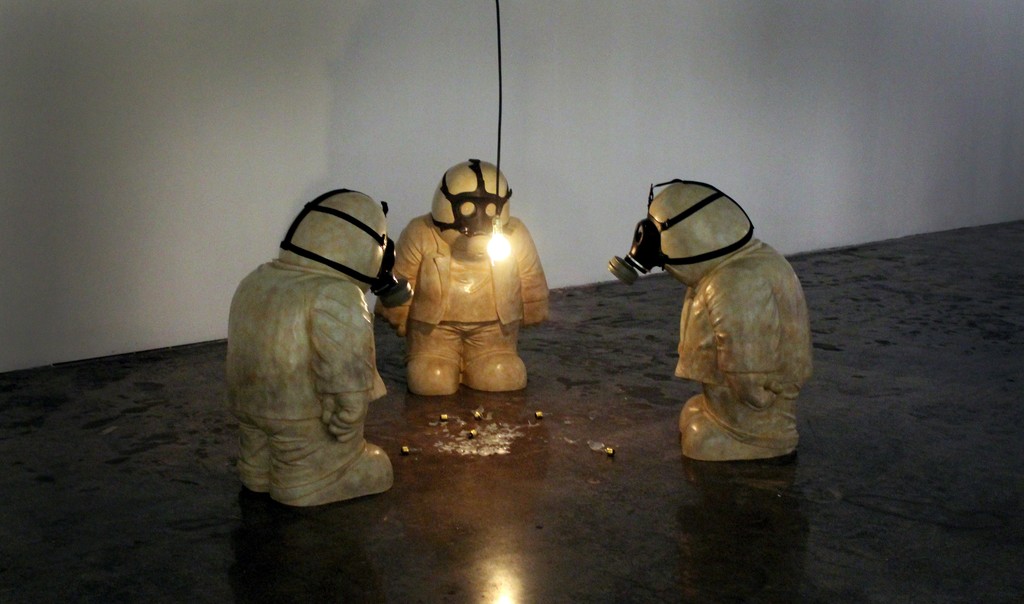 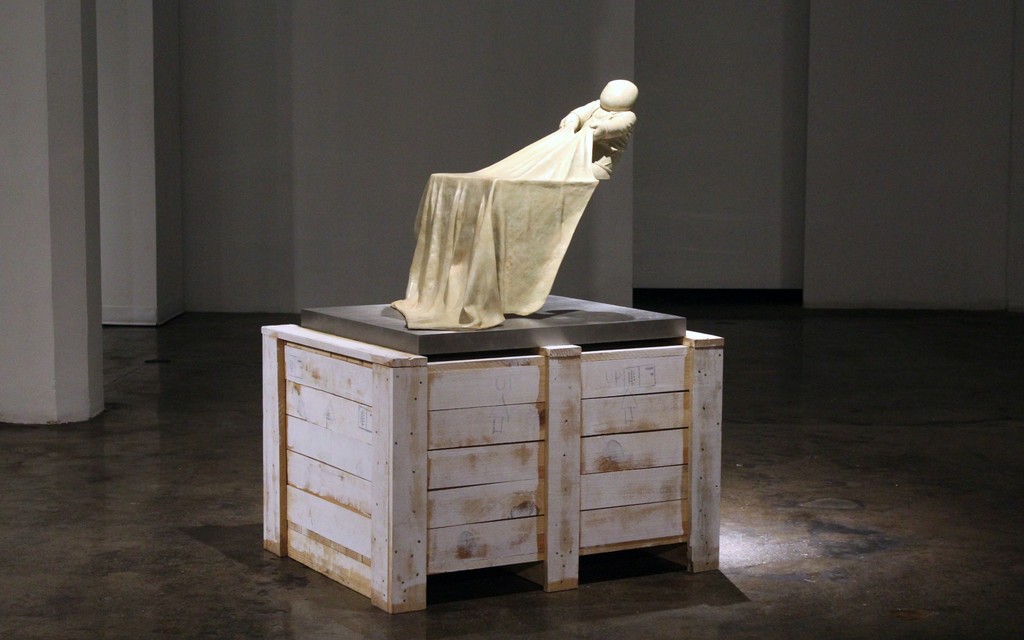 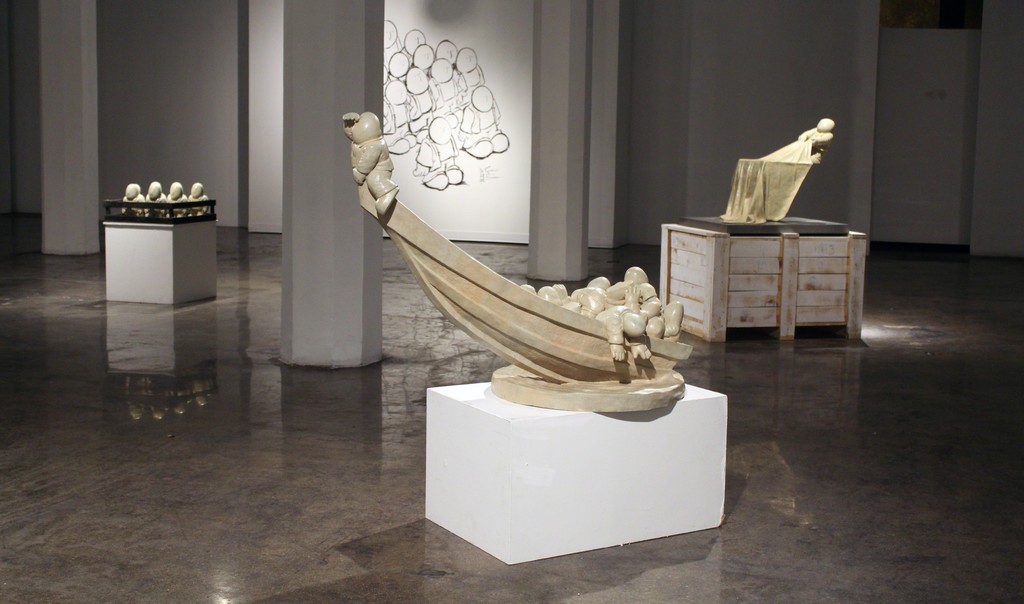 For Immediate Release.
Please add to your listings/announcements.

ABOUT THE EXHBITION
Text By Margaret Failoni
To convey a large selection of conceptual thought on the direction the world is taking, Rodrigo de la Sierra switches to different sculptural techniques depending on the particular message. He has created Timoteo -better known as Timo- an alter ego figure with a submissive, gentle, child-like continence which makes the very conceptual pill he administrates much easier to swallow. Children delight in this playful, appealing figure. Adults, on the other hand, can take the time to study what is behind this little man's performance. It is this dichotomy which is so fascinating: a child like figure of a man used to create conceptual art. Is it the financial debacle of the last eight years (Los de arriba, los de abajo)? Or could it be the present day materialistic diminishing values such as seen in the “Ego” series? Are we all so frustrated, depressed and stressed out that we have to resort to a mechanical means of “Happiness”? What does it mean to have 'arrived' in today's society? Are we caught up with the never ending quest 'to make it' (Escalera Eletrica) even if it means stepping over someone to get there (Bajo Controle)? Who are we and who do we want to be (Acto Reflejo)?
In just a few short years, this former architect has delighted us with his whimsical creations which enable us to be gently critical of today's society, of the frenetic world we have created and this certainly is no easy task. The artist has purposely used pale gray patinas to accentuate Timo's lightness of being. Where will he take us next? Whatever; it is a joy to follow him.

ABOUT RODRIGO DE LA SIERRA
Rodrigo de la Sierra lives and works in Mexico City, where he was born in 1971. After finishing his Bachelor’s Degree in Architecture, a Course on Creativity in the Valle de Mexico University, and having been a practitioner in Architecture for 12 years, the Artist participated in the workshops entitled: “Materials and Patina Techniques” and “Sculpture Workshop at the Pippal’s Sculpture and Art Circle.”
He was trained in modeling, wood carving, molds and casting, and figurative sculpture in the Iberoamericana University. After that, he went on with his development through a self-teaching approach. With a career of 7 years as a sculptor, De la Sierra has been able to exhibit in some of the most important cities in the World in Countries like: Italy, Canada, Korea, USA and Mexico, and has been chosen to participate in different prestigious Biennials in Spain and Japan. He has participated in domestic and international fairs, such as: Expo Chicago, Zona Maco, and the Affordable Art Fair in Singapore.
Currently, he displays his work in San Miguel de Allende, Valle de Bravo, Puerto Vallarta, Baja California and Acapulco in Mexico. He has had significant exhibits in the City’s Museum in Santiago de Queretaro, the Treasury Ministry’s Museum, Casa del Risco Museum in Mexico City, the National 21st-Century Medical Center, the Cultural Center of the State of Mexico, and the Modern Art Museum of the State of Mexico, among others.
De la Sierra has participated in foundations that collaborate with the UN, such as organ donation organizations; the ALE Association and the Renal Tubular Acidosis Organization; and other organizations, such as: Aid for Aids in New York, México Vivo Foundation, Cuernavaca-United We Are Equal, and the All- For-The-Movies Foundations.
He has also displayed his works in important places such as: the National Museum of Anthropology in Mexico City, the Museum of Modern Art in Mexico City, the Soumaya Museum and in the Júmex Museum.

ABOUT THE ZHOU B ART CENTER
The Zhou B Art Center is a private, non-government funded art center designed to facilitate the exchange of contemporary art between Chicago and the international art community. The 87,000 square feet art center offers innumerable possibilities for exploring the arts in a charismatic location and collectively form an extravagant art center fusing culture and creativity.
The Zhou B Art Center was founded in 2003 by the world renowned artists, the Zhou Brothers. It is now home to several exhibition spaces, a cafe, an art store, galleries and artist studios. It has established itself as the premier venue for internationally recognized art shows and events and continues to galvanize the South Side and the Bridgeport neighborhood as the most interesting new area for the arts in Chicago.