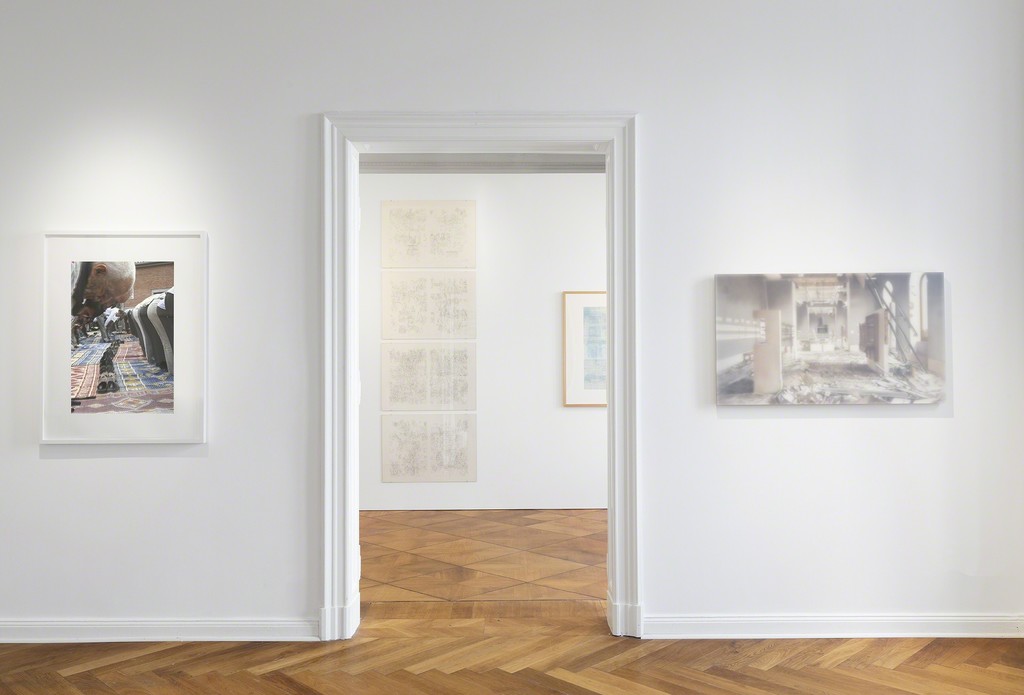 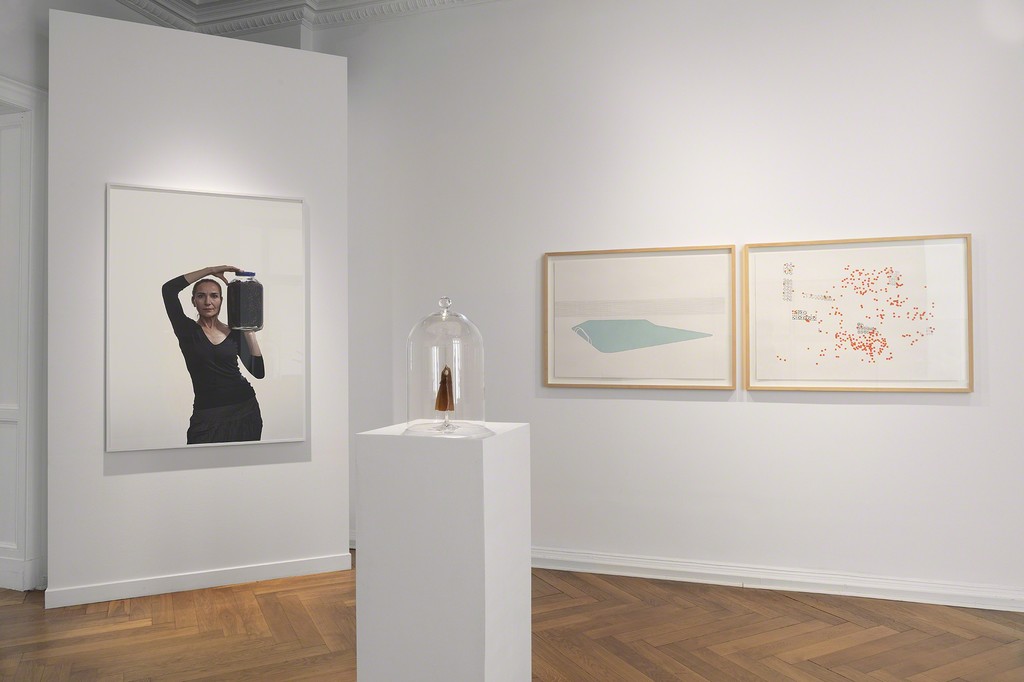 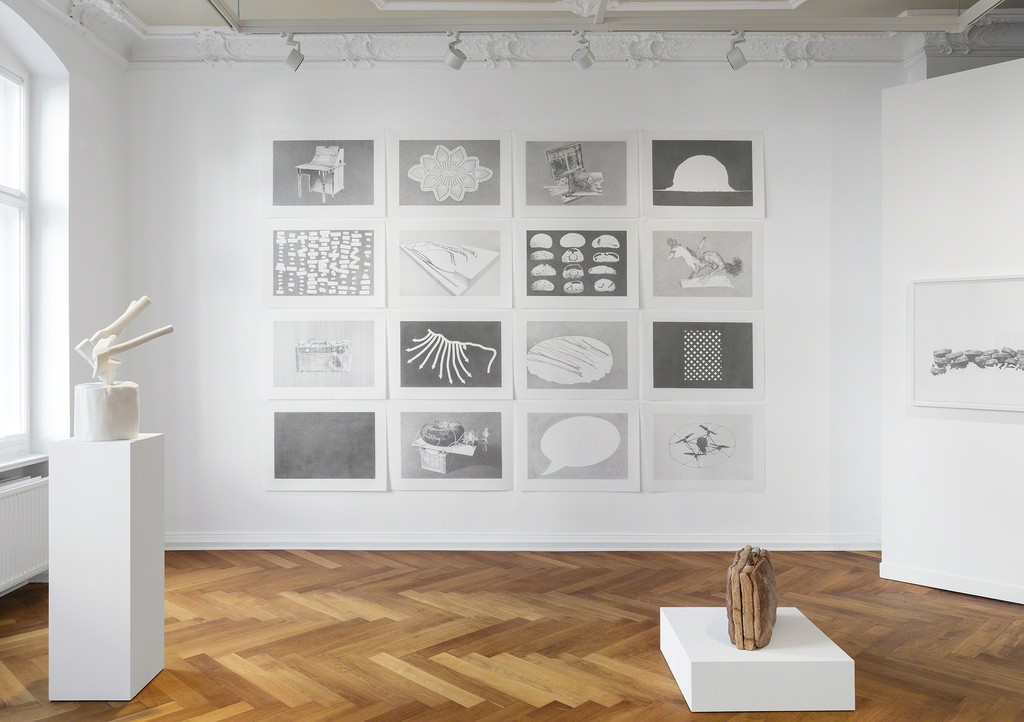 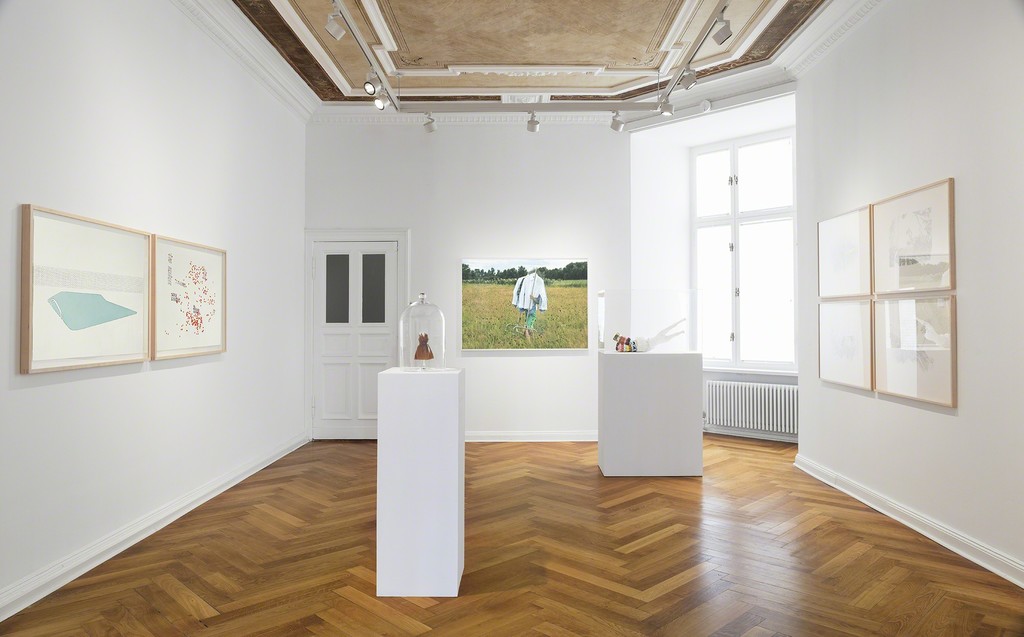 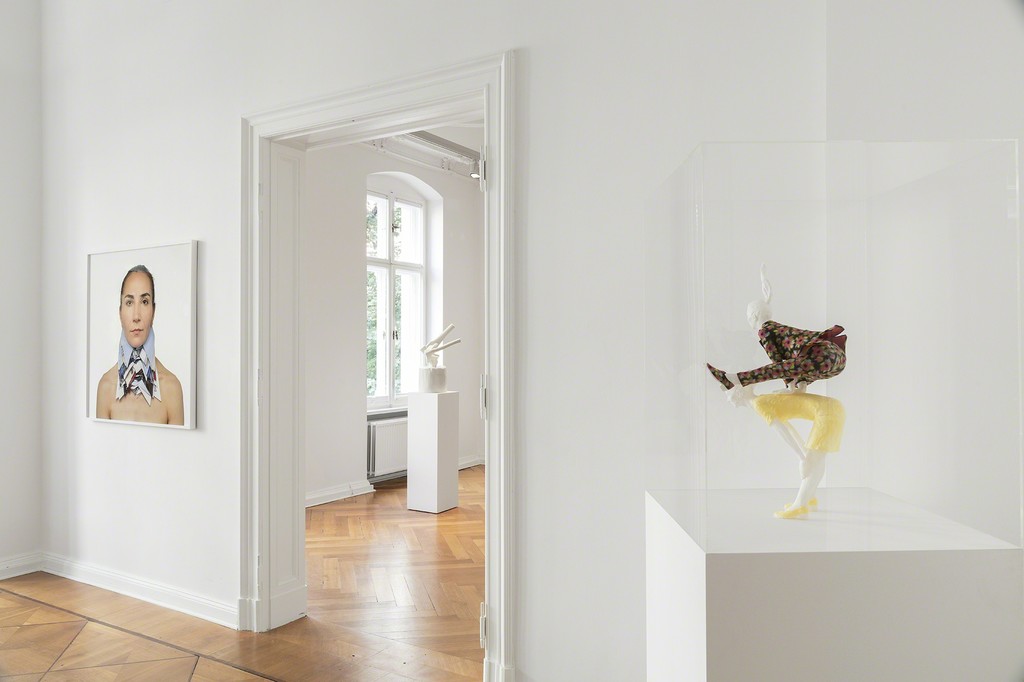 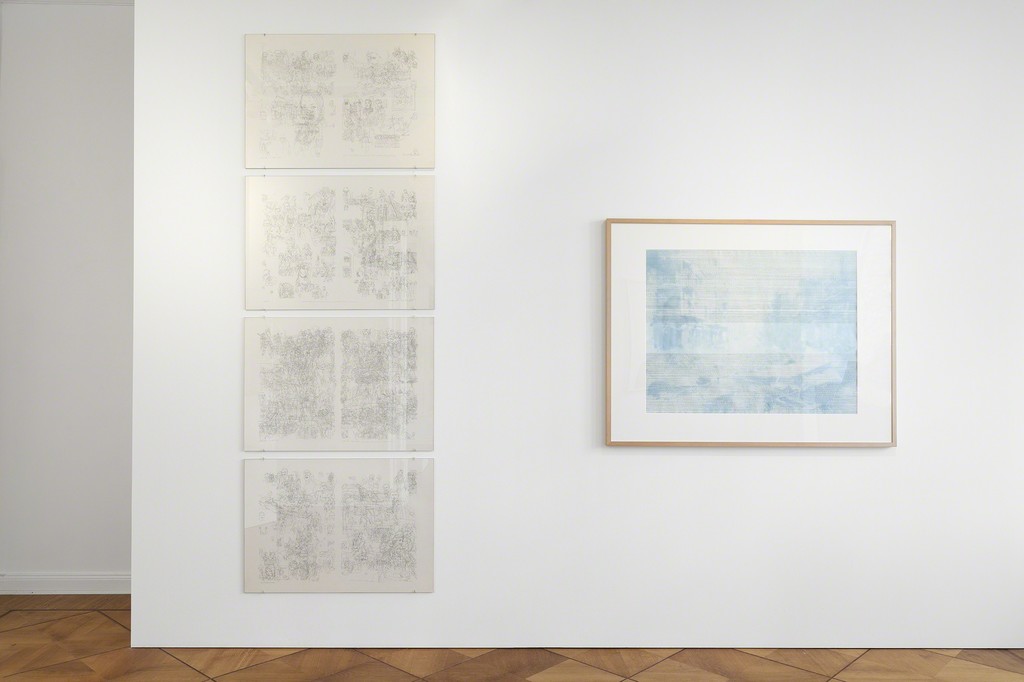 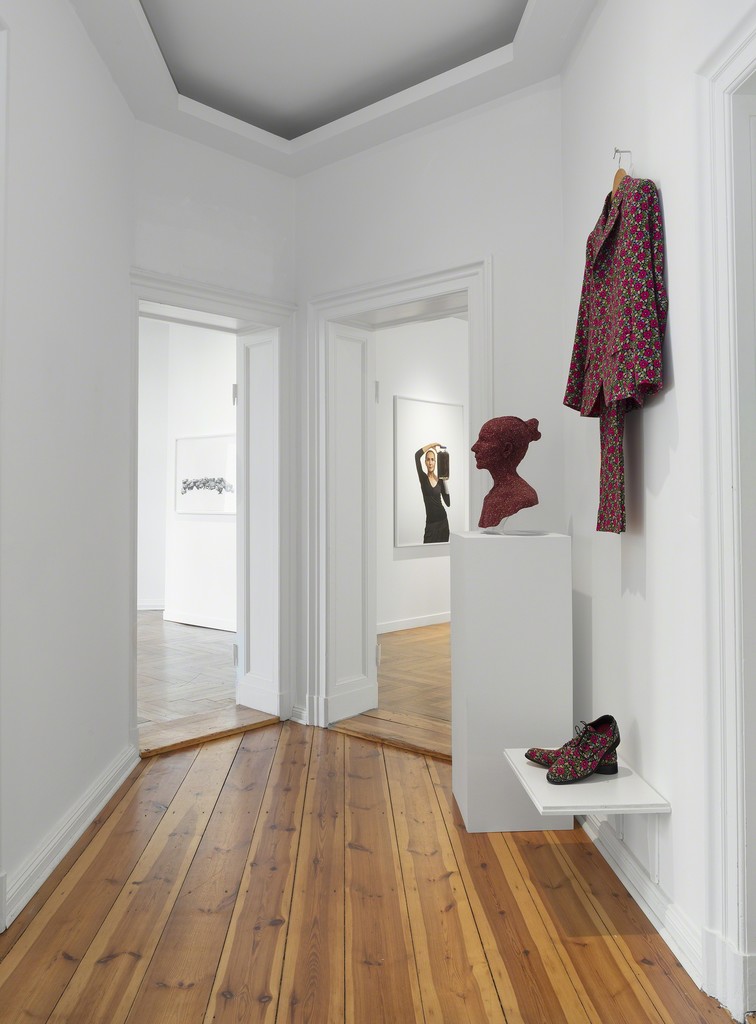 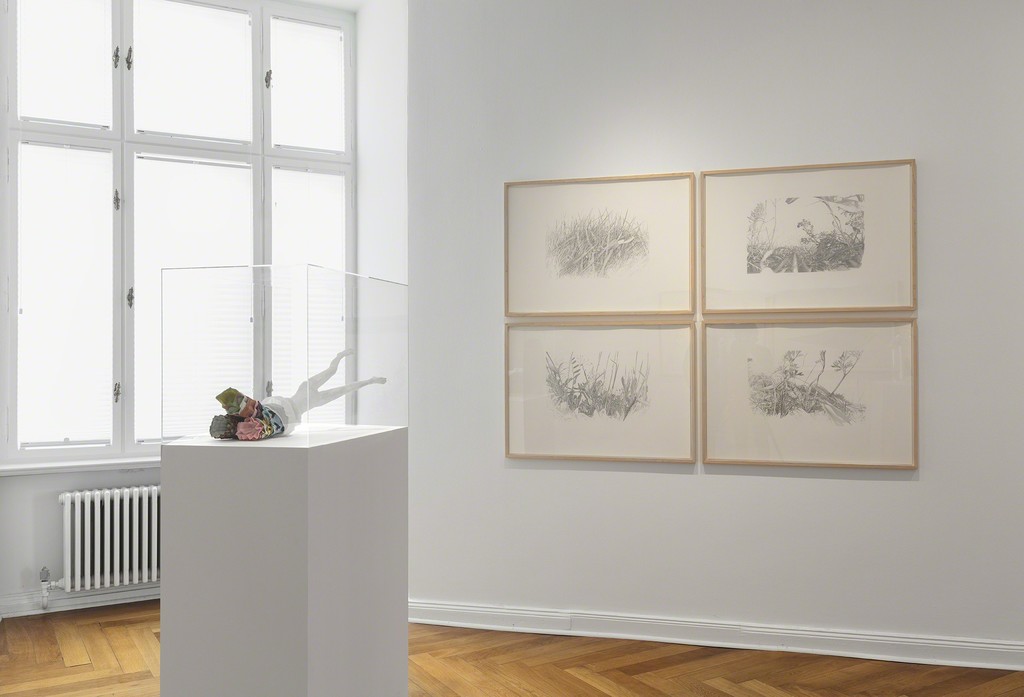 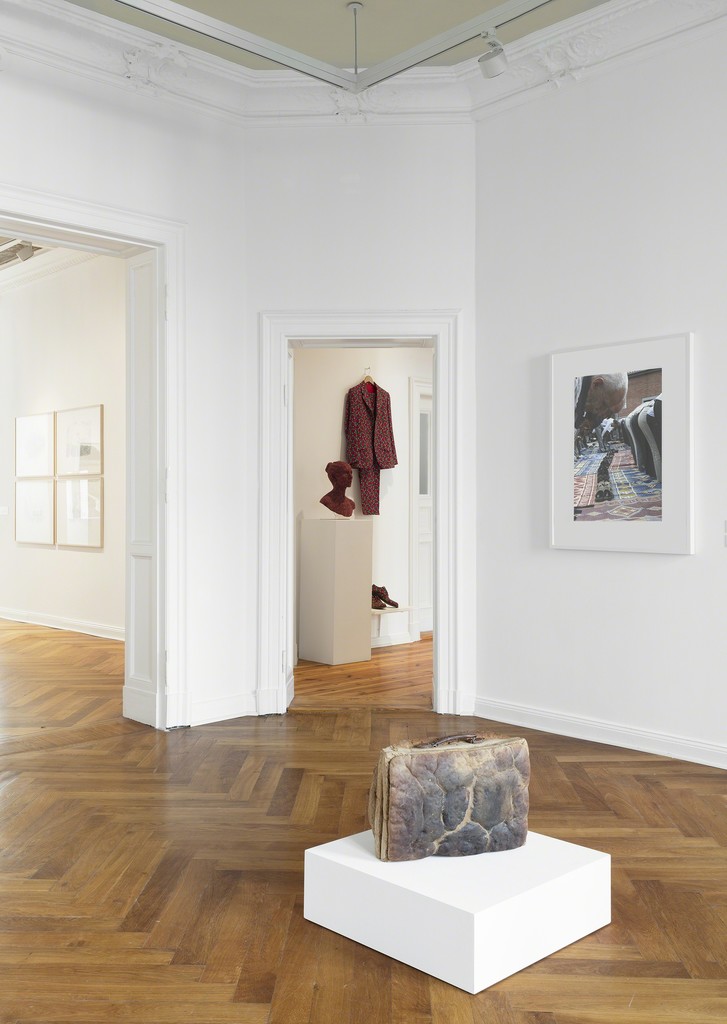 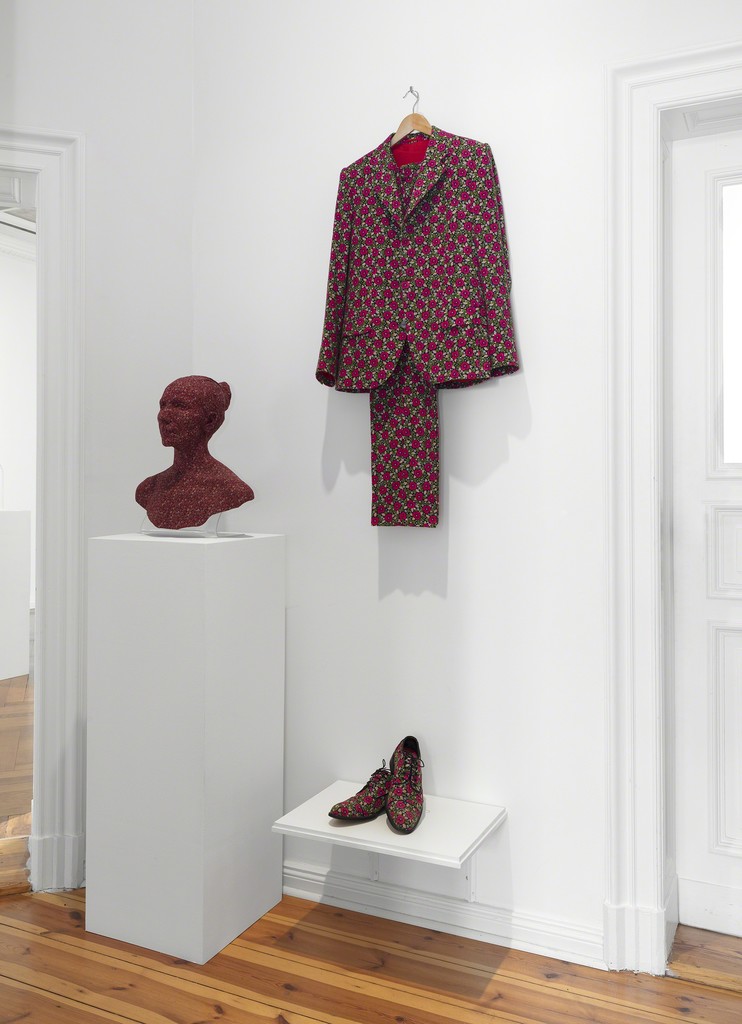 In curator René Block’s words: “Sympathie is not a ‘Thema’, not even a motto.”
Rather, it is a statement about a cooperative exhibition; a moment of ‘Freundschaft.’
Despite the fact that Baydu’s and Anders’ works are different from each other, for Block, Sympathie is a message about being in good mood and harmonie, especially in such times we are going through.
Mehtap Baydu’s oeuvre deals with identity politics and societal roles through performances, photographs, installations and (paper) sculptures. Her performances such as Osman (2009) deal with Kafkaesk bureucracies by also using the power of crossdressing. The codes of clothing has been a crucial aspect of the works of Baydu such as Long Neck (2011) in which the artist wears various types of collars of man shirts on top of each other. Codes of cultural habits or gender roles are being playfully questioned in the works Sonntagspaziergang (2015) and Birdirbir (2017). Grown up in Turkey, Baydu uses traditional fabrics that women in Anatolia wear to sew the man-suit Kıyafet (2015), which will be the protagonist of the intervention that will happen during the opening—same material also covers the bust Self-Portrait: From Her Mother’s Fabric (2015). The ‘baked’ luggage with a leather handle, Brot (2011), commemorates the guestworkers who came to Germany to earn a decent living as a result of economical problems they went through in their homelands.
Drawings and paintings of Peter Anders are in uenced by images from various media such as newspapers or online sources. In the series Kammerbilder (1998-ongoing), Anders drags certain catasthropic events in history such as burned down mosques, youth houses just after a Neo-Nazi attack or looted museums. These ‘chamber paintings’ painted with layers of wax, brings us to a moment following a violent act. The moment we enter is when the attackers have just left the Mallawi Museum in Upper Egypt (Drei, Zwei, Eins..., 2013). The barricades built with car tires are encountered in the drawing Cizre (2017). In the series News-Türban, the drawings consist of overlapped images that are taken out from Turkish local newspapers like Milliyet or Vatan. As a result of strati cation, supposed to be vigorous images transform into a mess of incomprehensible lines. For that reason, in Handshake with Putin (2015), the body of Putin trembles.
Mehtap Baydu (Bingöl, 1972) lives and works in Berlin. She studied at the Department of Sculpture of the Hacettepe University and continued her postgraduate studies at the Kassel Fine Arts University graduating from the atelier of Professor Dorothee von Windheim. She was conferred the title of master student (Meisterschülerin), the UPK-Kassel Arts Prize, as well as the Otto Braun scholarship. Baydu participated in solo and group exhibitions nationally and internationally, a.o. Art International Istanbul, Istanbul (2015), Berlin Art Projects, Berlin (2014), Tanas Gallery, Berlin (2012), Documenta-Halle, Kassel (2011) and Kunsthalle Fridericianum, Kassel (2009).
Peter Anders (Nördlingen, 1958) lives and works in Berlin. He studied Visual Communication and Fine Arts at the School of Art and Design at the University of Kassel and has been a lecturer in the Department of Fine Arts and Department of Architecture at the University of Kassel. Anders participated in solo and group exhibitions nationally and internationally, a.o. Galerie Coucou, Kassel (2016), Arter, Istanbul (2015), Kunstverein Nördlingen (2014), Kunsthal Charlottenborg, Copenhagen (2011), Galerie Ebensperger, Berlin (2010), Kunstforeningen 44 Moen, Denmark (2009), COPYRIGHT Projektraum, Berlin (2008), Galerie Olaf Stüber, Berlin (2007), Cetinje Biennial V, Montenegro (2004), Staatliche Museen Kassel (2003) and Kunsthalle Fridericianum, Kassel (2001).